In the last post we were in Seminole, Texas. OK town, but it was a Sunday and nothing was open so we had to make do with a Snickers and some water. So when we set off the next morning, breakfast was heavy on my mind. To begin with, we did over sleep a little, waking at 8am. The plan had been to be off by 6am as the terrible heat the day before had made us feel a bit unwell. Not to worry, we must have needed the shut-eye.

Hoping for a Denny’s or even a McDonald’s for something to take away the hunger pangs, we rode west towards the New Mexico border; but there wasn’t an eatery in site. We crossed over the state line….

and through the first town of Hobbs

– looks a decent size on the map, should be a Denny’s here… but I guess they must have been off the main drag and through town, because nope, no brekky places. The heat was increasing, as was my thirst and hunger.

The next town was Artesia, about 41 miles away. The road began to become more desolate and arid. Nodding Donkeys appeared for miles and miles – appeared – as far as the eye could see; there must be oil in them thar hills – or in this case, plains.

(A pumpjack, horsehead pump, grasshopper pump, thirsty bird, jack pump) is the overground drive for a reciprocating piston pump in an oil well)

Dust blew across the road and grit got in our eyes.

Someone, somewhere read that map wrong! On and on and on we rode. Another road sign, ‘Artesia – 14 miles’ At that point, I wondered what urine would taste like and J’s shoulder was looking like a likely piece of meat. Mmm – I could just take a chunk of that right now.

The road began to grow buildings and oil-industry machinery began to appear.

Yet not a soul did we see. There were cabins that advertised food and drink, but they were all closed and deserted.

Finally – a town did appear, and, very nice it looked too – but it was still fairly deserted. We rode up and down and finally found a lady loading up her pick-up. We stopped and asked where we could get breakfast. Ah, Ruth’, two blocks thataway.

We found Ruth’s and went in – quite a few vehicles outside – looks promising. Quite a few senior citizens in there too – more and more promising.

no waitress – up to the counter to order. I ordered egg, sausage and toast – and hot tea (you have to specify that or you get iced tea).

About 20 minutes later, my tea arrived. I undid the tea-bag envelope and plopped the bag in the cup. Something didn’t fizzle – or look right. I put the tip of my finger in the cup – stone bloody cold – even icy. Argh. I returned to the counter and said, ‘I can’t make tea with ice water’. The Mexican lady had a little difficulty understanding – and was a little gobsmacked when I repeated it in Spanish.

Bit of a mess with snotty egg and the final crunch came when the flock of flies began to dine along with me. Oh bugger this, and bugger this bloody awful place! I left the meal and went outside, feeling a bit queasy.

J had finished his drinks so off we went to look for a bank and fill the bike up. BUT, there was a saving grace to the town. Some magnificent bronze sculptures celebrating the town’s history of ranching and the oil industry. 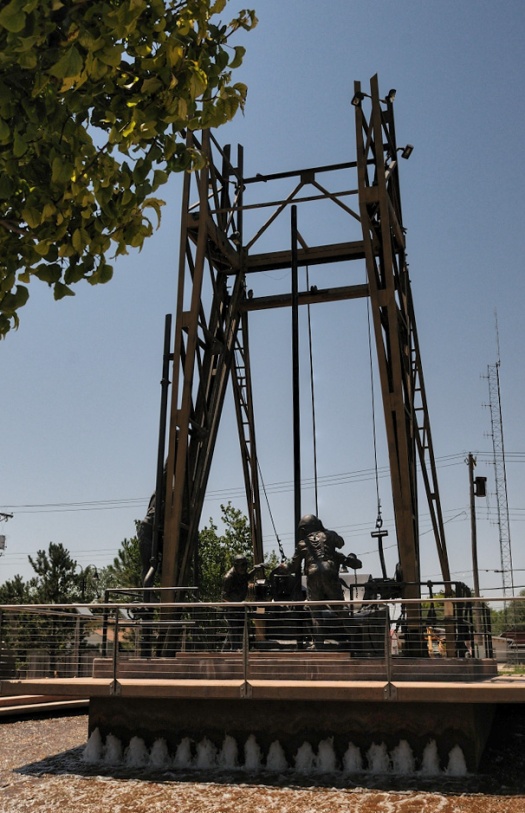