It was a bit of an anxious 110 mile ride from Rachel to the next gas station in Tonopah. From Ash Springs to Rachel had been about 50 miles. From Rachel (no gas there) to Tonopah was another 110 m.

The low fuel light went on 5 miles from the next town but we made it and the odo said 159.8 miles!

Gas and coffee and back on the road. We had decided to take HW120 to Lee Vining, California.

And a great ride that was. Curving roads with rises and falls where you couldn’t see over the crest – oops – a truck, quick pulse. We ride towards the middle of the road in case any deer run out – at least that gives us room to manouver one way or the other – and we really didn’t expect to see a vehicle come over the hill like that. But there was room for us both (you can see that on the video posted a couple of days back – Deserted.

It was an amazing difference in scenery and terrain. Shortly after crossing the state line into California, the majestic Sierra Nevada mountain range filled the view from north to south.

Jut before Lee Vining, we rode through the Inyo National Forest.

Once in Lee Vining, at the eastern end of the Tioga Pass which leads to Yosemite NP, we headed for the same campsite we had stayed in two years ago.

We pitched the tent,organised our gear, boiled a few eggs ( at 7,000 ft and took AGES to boil the kettle with stupid Sterno) and took off for the beautiful and unique Mono Lake.

Mono La is a large, shallow saline lake in Mono County, California, formed at least 760,000 years ago as a terminal lake in a basin that has no outlet to the ocean. Because it lacks an outlet, dissolved salts make the lake very alkaline and saline.

This desert lake has an unusually productive ecosystem based on brine shrimp that thrive in its waters, and provides critical nesting habitat for two million annual migratory birds that feed on the shrimp.

The human history of Mono Lake is associated with its productive ecosystem. The native Kutzadika’a people derived nutrition from the larvae of the alkaline flies that live in the lake. When the city of Los Angeles diverted water from flowing into the lake, it lowered the lake level, which imperiled the migratory birds.

Deprived of its freshwater sources, the volume of Mono Lake halved, while its salinity doubled. Unable to adapt to these changing conditions within such a short period of time, the ecosystem began to collapse. By the 1980s, the lake had dropped 45 feet.

I learned all this from Eric, our Mono Lake Ranger who took a group of us on an hour tour of the area.

Eric made all the science part interesting and actually showed us how the Tufas are formed.

Tufa is essentially common limestone. What is uncommon about this limestone is the way it forms. Typically, underwater springs rich in calcium (the stuff in your bones) mix with lake water rich in carbonates (the stuff in baking soda). As the calcium comes in contact with carbonates in the lake, a chemical reaction occurs resulting in calcium carbonate–limestone. The calcium carbonate precipitates (settles out of solution as a solid) around the spring, and over the course of decades to centuries, a tufa tower will grow. Tufa towers grow exclusively underwater, and some grow to heights of over 30 feet.

So, enough of the science – here’s some photos (not my best ones, I need to get on my Mac to convert the RAW files – these are mostly taken with the little Sony NEX) and, following that, two videos with Eric explaining the geology/ecology of the lake in a way that was interesting to the whole group – young to old. 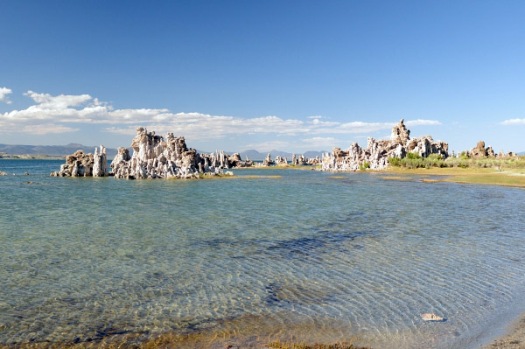 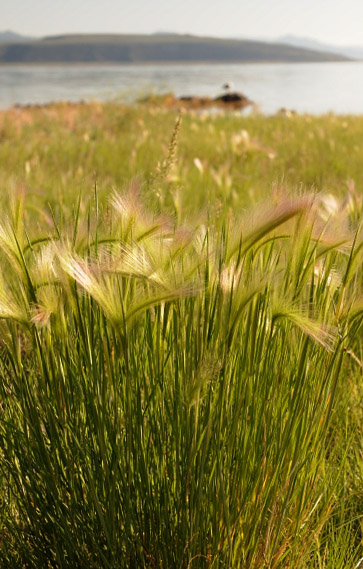 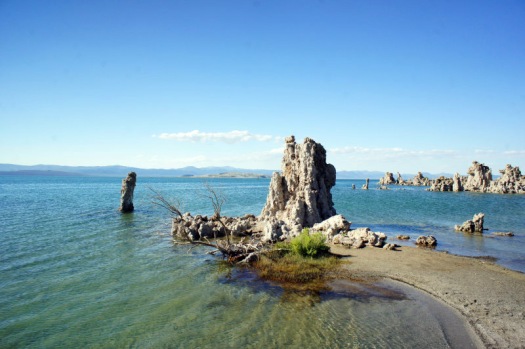 Once again, apologies for the video quality – a real shame because the full size vid is really nice – but needs must for t’interweb.

By the way, the woman with the Nikon camera isn’t me… she’s a German lady with good taste 😀

It was a thoroughly interesting afternoon – made even better by the moon rising in just the right spot for some early evening photos.

We got back to the tent with a bottle of wine and some beers – note my posh wine glass, cut from a plastic water bottle – and took cameras and comp into the laundry room to empty cards of photos (a 16gb CF card, and 8gb SD card and a 32gb SD card), charge batteries and do the laundry.

I’ll say I was tired, others might accuse me of being a bit blotto on wine, but I ended up laundering my money….. forgot to empty my pockets when I washed my cargo pants!

US dollars are made from denim – which is why my notes didn’t disintegrate!

OK, that’s all for a couple of days – still things to catch up on, but off to Great Basin national Park tomorrow and may be camping. From there, I think we are heading to Capitol Reef NP back in Utah.

The route taken in this thread