Hi from Ely, Nevada – the most western town on HW 50 – designated ‘The Loneliest Road In America’.

One of the best ways to experience Nevada is to travel Highway 50. Highway 50 roughly parallels the Pony Express Trail, which goes from Silver Springs through Fallon and along the towns across Highway 50. Remnants of the Pony Express Route are visible for much of the way. Stretching the width of Nevada, Highway 50 is a fascinating scenic and historic corridor through a land seemingly untouched by man. The road travels through snow-mantled mountains that reach summits of more than 11,000 feet.

Far from lonely, Highway 50 actually has some sights that make traveling the byway a worthwhile trip. Many ghost towns and historical cemeteries dot the area. Beautiful historic mining towns are scattered across the byway.

Traveling this remote, lonely area always fills me with a sense of awe at the people who made the way across the USA to find a better life; they didn’t always find it and had to endure incredible difficulties in the attempt to do so.

But HW 50 is not quite as lonely as some other roads in Nevada.

My last post was from Cedar City, Utah, fairly close to the eastern border of Nevada.We made an early start in order to avoid the worst heat of the day; destination, Rachel, Nevada; this is on HW375 – also known as ‘The Extraterrestrial Highway’.

The day didn’t look too promising – and, unbelievably, we actually had to stop and put our rain gear on to try to keep warm; that turned out to be a good thing because it did start to rain heavily.

Luckily, we were close to Panaca and its gas station. Good time for a coffee and you ALWAYS fill up when you find a rare gas station in these areas.

From Panaca we needed to bypass HW375 so we could fill up before the start of a road with no gas stations. Nearest gas was in Ash Springs, 5 miles further west. The owner was a very jovial man and ran the gas station and the cafe with military efficiency.

That would be the last fuel available for 160 miles, so we filled the tank to absolute max capacity. 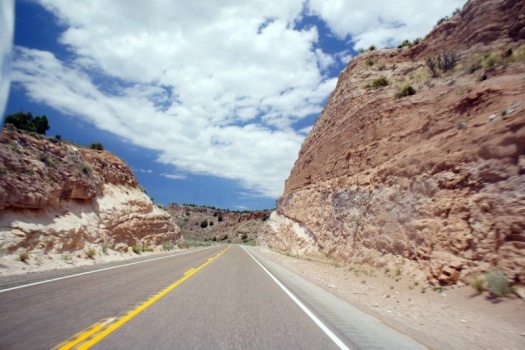 Oh, and the sun came out! 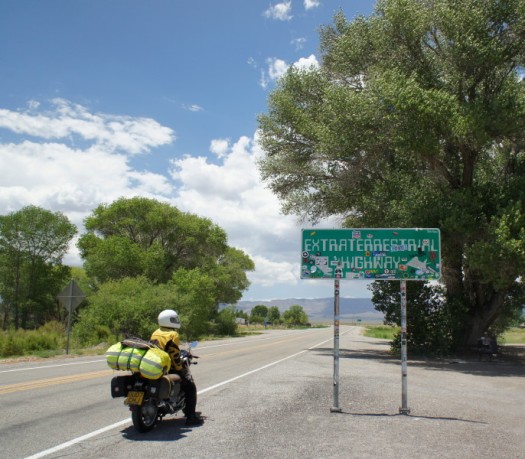 With its proximity to the mysterious Air Force testing facility, Area 51, and its location smack dab on the Extraterrestrial Highway, it’s easy to see why the tiny town of Rachel is known as the “UFO Capital of the World.”

Rachel may be best known for alien lore. But that doesn’t mean there aren’t plenty of more earthly interesting sights to be found in the vicinity. Historic ghost towns, petroglyphs, and downright stunning desert scenery are nearby, and the town’s remote location makes for an unbelievable night sky.

We decided to stay the night in Rachel and booked a room – well half of a trailer, shared bathroom.

Unloaded, I took off to take some photos leaving J in the bar.

The sunset wasn’t especially dramatic, but I did manage of couple of good shots – problem is, I can’t carry a tripod – my camera, with its 24-70mm lens – is too heavy for a light tripod.

As the light faded, I made for the bar at the Little Ale’Inn.

And found the aliens! J was one of the only three customers – plus the bar tender, of course. One guy told me he ‘might not be human’. He was a young-looking 60-year old who’s IQ was immeasurable. Then there was another guy who, within a few minutes, decided to cling to me like a limpet. He was showing me pictures in a brochure of various points of interest locally. If i sat at the bar, he sat close next to me. If I went outside, he followed me. Sitting outside, looking at the trillions of stars in the black sky, he told me he had a goat. “Lovely” says I. A few minutes went by in silence. “Wudya like ta come an see ma goat?’ he asked. I wasn’t quite sure how to answer that, but eventually said, “It’s a bit dark!” “Well” says he, “I have a good flashlight n I got ma ATV, won’t take but a few minutes”. Mm. “I’m just going to the bathroom” I said.

I went in and told the bar tender this man wanted to take me to see his goat. He shook his head subtly and said, ” Nope, don’t go out with him in the dark on your own”. Nuff said.

So Mr Brainiac, Mr Drool and Drunken MGman *he’d been trying the various whiskeys) were the closest I came to meeting aliens on the ET Highway.

Now here’s a thing…. all my photos from that night disappeared from my camera…….

To keep the pages from becoming slow to load, I’ll do part 2 separately. Back soon 🙂

2 Replies to “The Loneliest Roads In America”