Hi all – yes, it has been a couple of days since the last post. Mainly because there wasn’t a lot to write about – and you may want to miss this post out if you aren’t in the mood for a spot of moaning 🙂

Three days ago, we set off from Minnesota and, about 30 miles down the road, crossed into the high plains of eastern Montana.

It was cold and very windy. We also hit quite a lot of road works and the bike and bags were soon speckled with tar. 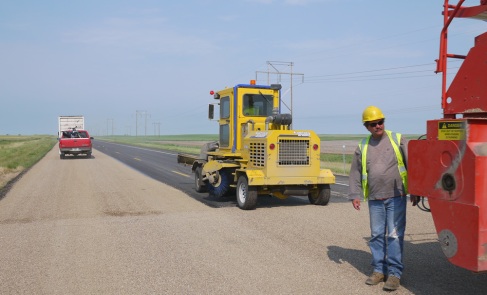 Our first fill-up was at Wolf Point. Whilst having a hot drink, a bunch of bikers pulled in to fill up. Over coffees, we heard they were from Wisconsin and were on their way to Alaska.

Could just do with one of those trailers!

It will be friend Pete’s birthday on June 30th, so we had to take a photo of where his card was posted

Towards early afternoon, the weather heated up a lot – and we were sweaty and tired so we decided to call it a day after only 289 miles. We came to a town called Havre – on a reservation so, it was filled with casinos.

The whole town was based on gambling – even the motels. But casino motels tend to be good value; you can often get a really good package if you are going to gamble – cheap room, free food. However, we aren’t interested in that so we just went ahead and booked into cleanest looking motel; $64 including breakfast and a nice room. 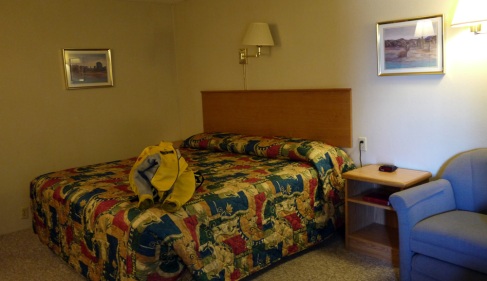 Changed out of biking gear, we ventured into town for something to eat. We tried one cafe – pizzas only; no thanks. Next we had a welcome beer in a bar that sold food. They ‘did’ food – hotdogs or burgers; no thanks. But, the helpful barmaid asked what kind of food we were looking for; w-e-l-l something fresh, not fried, not in breadcrumbs and not a hotdog or hamburger – those are our staples on-the-road gas station viddles. She said the Mexican, next door was good. Neither of us are big on Mexican either; too many years eating it and finding it simply a different arrangement of the same basic 4 ingredients – one of which (bell peppers) gives me 3-day indigestion. However, beggars can’t be choosers so we decided to give it a try. My burrito looked OK but consisted of a dried out, shredded, stale chicken. Jan’s Chicken verde closely resembled dog vomit. We have taken an oath never, EVER to eat Mexican again! 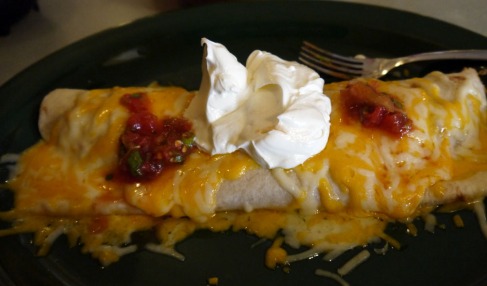 It was a nice town though with an interesting past and some lovely old buildings; the courthouse was rather grand

Back at the bike (both with indigestion) we thought the bike deserved a good wash. So we used the tar remover, polish and a little elbow grease and soon got the Italian Stallion sparkling again. 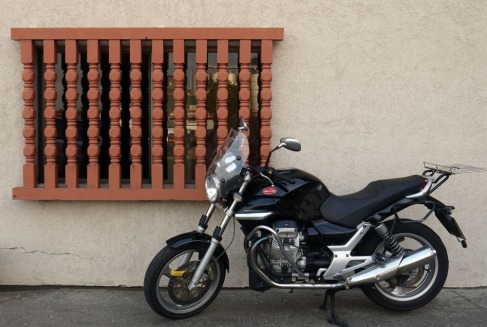 The motel backed onto a railway depot, so I drug the Nikon out and spent a relaxing hour taking sunset shots of the BNSF (Burlington Northern and Santa Fe)  engine sitting on the track until a man in a pick-up said I was trespassing.

Next morning, we made a start at around 8am. Again, the day started windy. We were ready to do a really long ride too, our first stop to fill up was in a small town called Shelby. Next we found an actual coffee shop and had a warming drink. Outside, ready to climb back on the bike, a couple stopped to ask which way we were headed.

West, we told them. “Well you best seek shelter because there is a severe weather warning in progress; violent thunderstorms and large size hail on its way”. That changed the plan a little. We knew we could make it to the next town, Cut Bank, so we high-tailed it down the road. In town, we stopped at the first of the two motels – rooms on the second floor only and a lot of corridors and stairs; so, not that easy with the bike bags. Instead, we decided to try the other motel. As we stopped the bike, there were a couple of men in one of the rooms – door open, no mattress on bed and, from what we could see, the room was being gutted. The rooms on the other leg of the L shape seemed reasonable though.

We went into the office – via a deck filled with torn chairs, rusty barbeques and broken toys. the office was similarly shabby and big doubts were raising their heads in my mind. But at that very moment, with a tremendous clap of thunder, the heavens opened. Jan sighed with relief that we had just made it and proceeded to pay for one night.

The woman dealt with taking the payment whilst, at the same time, dealing with two screaming toddlers and also trying to give the bedding to a young guy to ‘get our room ready’. Said laddo, strolled through the pouring rain with an armful of sheets and a wooly blanket and – HORROR of Horrors, took them to the room I thought was being gutted. From a shed nearby, another man carried a mattress on his head – sheltering from the rain underneath it!

This was getting very worriesome and, if not for the rain, I would have run a mile. Jan looked unconcerned – as men often do. 20 minutes later, the room was declared ‘ready’. We ran to room 16 and inside, all was as I feared. What a bloody dump. How much was the room? $53; the room was worth about $15 – at a pinch. I moaned and groaned about the cost and wanted to go get the money back and ride – rain or no rain – to the next town but Jan said he was not going out in that weather. So, there we were – me with a right toot on, cussing and ranting – not at Jan, but the ‘Robbing bastards’. I’m pretty sure the two guys now in the next room (renovating?) must have heard me. I shan’t moan any more on here – except to tell you that we both smelled of cigarettes this morning from the smell on the sheets that were, incidentally, full of cigarette burns. 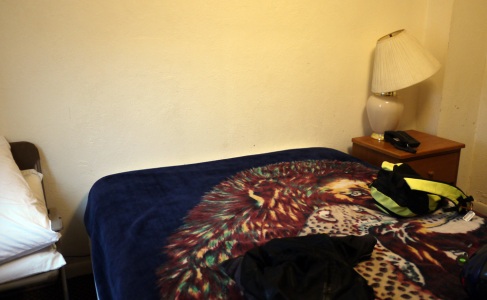 These photos make the place look reasonable – it wasn’t. In fact, I think the previous inmate may have given up in despair… 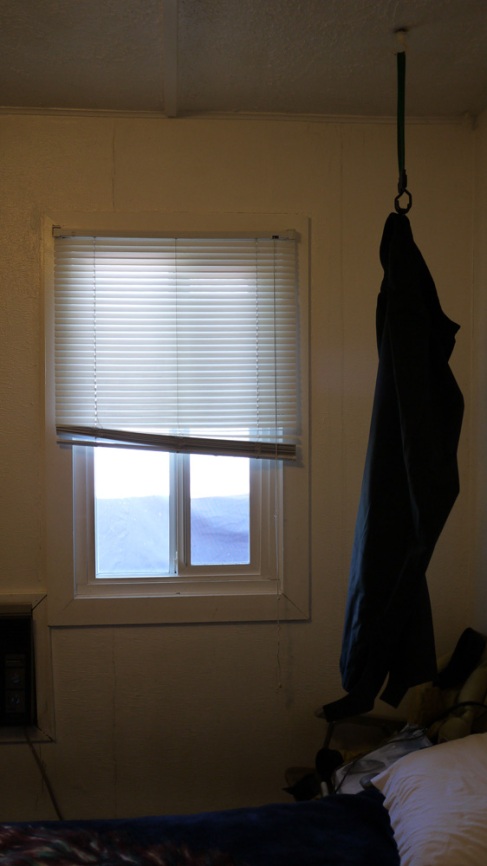 The awful thing was, 90 minutes after booking in, the rain stopped and the sky was a cloudless blue – AAARRRGHHH. But it was still very, very windy. There was a certain irony in the motel sign –

In the event, we were up and out of there by 7am. No drink, nada – just out on the road.

We were 121 miles from our next destination, Whitefish, where, very determinedly, I had booked a room ahead for two nights. This town is very close to the entrance to Glacier National Park – a beautiful, wild, rugged mountainous place which is a World Heritage Site.

From the start, it was an incredibly windy and cold ride. We were buffetted and blown all ways. Ahead, we could see heavy cloud cover over the snow-streaked mountains of Glacier. 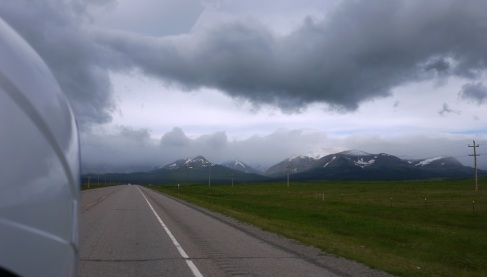 And once again, we encountered plenty of roadworks; these are inevitable in rugged northerly regions such as Montana. The extreme winters are hard on the road surface and cause them to crack and break up once the snows melt, so construction is a never-ending necessity – a little like painting the Forth Bridge.

The lens on my little Panasonic G3 was constantly covered in mist and drops of moisture, so the photos aren’t great but, just to give you an idea 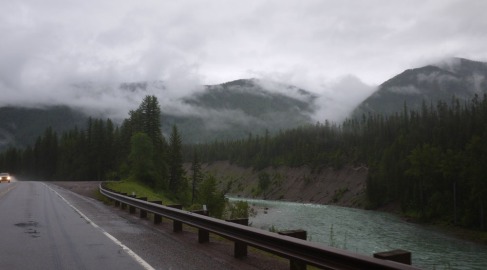 At last, highway 2 took us around the southerly perimeter of the park and into the clouds. It was so, so cold, that ride. Once we reached the western edge of the park, I nudged Jan to pull into the visitor centre. I could barely get off the bike, so stiff with cold was I. Poor Jan couldn’t feel his fingers. 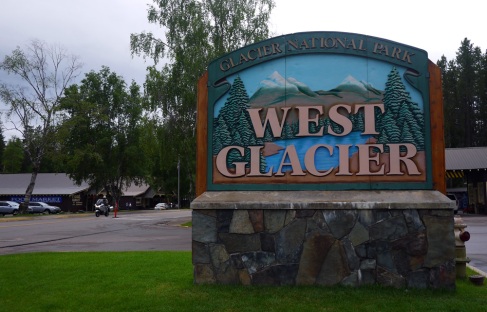 A hot drink was needed urgently. My shaking increased to the point I shook half of the drink onto the ground. This trip is the first one made so far north – all our earlier road trips have been across the mild midwest, hot and humid Florida and then out the the scorching deserts of the west. So our riding jackets are mesh for cool ventilation. Our rain gear is light too.

Once we were warmed a little, we took a look in the Alberta, Canada visitor centre for some great free maps and info…. 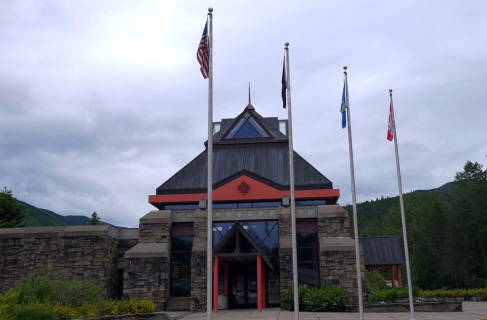 The past 3 days has shown us just what a difference there is in temperatures at these latitudes and so we are here in Whitefish for 2 nights – maybe 3, to sort out our clothing

this motel may be named Cheap Sleep (and at $55 a night including breakfast, it is cheap for such a popular resort) but it is friendly and comfy, decent and clean; what more can we ask except to spend a couple of days chillin’ 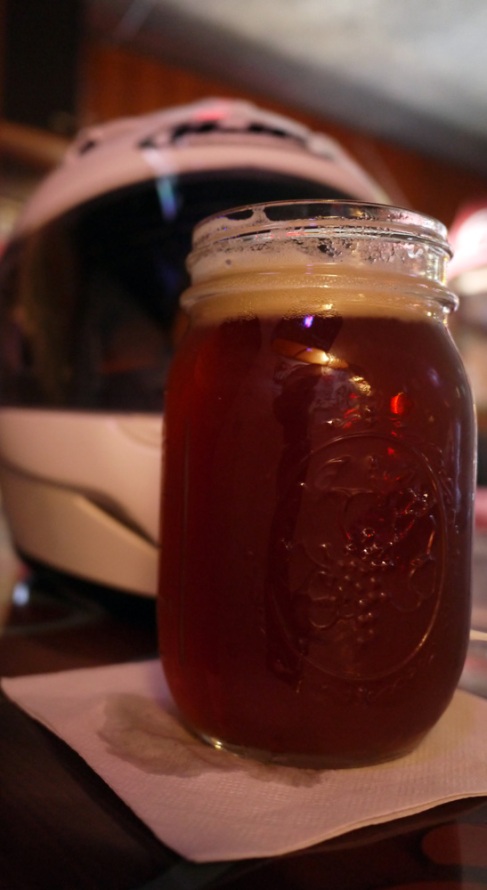 and having a jar or two – literally 😀