We are in a small town called Vanderhoof, on the Yellowhead Highway (HW16) which will take us back to Jasper and the start of that fantastic road through the Rockies with the glaciers and icefields.

We got the new tyre fitted yesterday; a Metzler Tourance 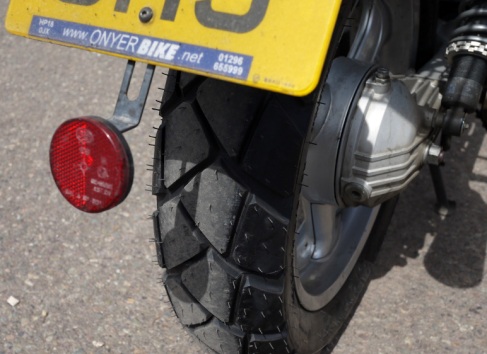 That is the same tyre they use on the BMW GS Series. It was the only one they had in that would fit our rim and it cost CA$450 – bit steep but worth the knowledge we aren’t pushing it any longer with that tyre.

It was midday by the time that was sorted, so we had a late start.

After 200 miles, Jan pulled to the side of the road to say he was tired and let’s look for a motel. This are is full of lakes and fishing is a big thing – so the first 3 motels we passed had no vacancies. At around 6pm, we came to Vanderhoof and saw a vacancy sign so we rode up the horrible, gravel ‘driveway’ and got an over-priced, crappy room – but we really needed to rest.

I washed the bike and we crashed for an hour.

The next part of the trip needed some planning though so, after an hour, I fired up the computer to look for a room for tomorrow night – in Jasper (the town we ended up sitting in the train station all night). Very few rooms available (again) and those that were, were around $300-$400 a night. So I checked nearby towns and finally found a log cabin (see them here) at the foot of Mount Robson  (the steepest mountain in the Rockies and the town before Jasper). We have a cabin for tonight $109 + tax – a bargain. No TV or internet though as the owner advocates the camp is to ‘get away from it all’

We will take it slowly through the Rockies this time and I will be taking lots of photos with my proper camera!

Once we are back in a motel – probably in Whitefish or Kalispell, back in Montana, I’ll sort out the photos from getting to Alaska as well as those taken since.

We are getting close to needing a decent rest now (rode 4,700 miles since we set off). It is actually very tiring constantly watching out for wildlife on the road and dealing with rough roads; the loading and unloading the bike gets tiring too – then there’s the age thing 😀

OK, all for now, time to get on the road again.