And filled up in the gas station in the Lutefisk…..

before hitting those lonely roads again; it seems we have been on these back roads forever – but it has only been one week.

The weather was still very hot and we thought we would take it easy and make a few stops in the small towns we passed through.

The first town was in the middle of a celebration of some sort.

We stopped for  breakfast in the real, old town bakery; it still had the original booths and still had the once modern innovation of a personal jukebox in each seating area.

I was enamored with some old model trains they had in a cabinet too – these were for sale and, had we had room, I would have bought a couple

Oh, and the home-made cherry pie with real ice cream was excellent.

We thought this might be a nice town to spend a night in and so asked a local lady if there was a motel. Nope, but ‘why not stay awhile and join in the fun’

The registration plate on our bike draws a lot of attention – and this man spotted it was not a plate from the USA. On hearing of our travels across the USA, he thought we deserved a gift from him on behalf of his town

Yes, it’s a million dollar bill and his very own photo graces the centre

Thank you kind sir, we can certainly use that – but so far, nobody has change…..

Well, we rode on through lots of small towns with very familiar names

… this one with its very own London Bridge

We crossed the Mississippi River

and a river with a name making it a very tempting place to swim…..

But not one town had a motel so onwards we rode.

Minnesota calls itself the ‘Land of 10,000 lakes’ but neglects to add, ‘but hardly any motels’

By 6pm we were getting tired but things looked up when we spotted a motel – a little ragged at the edges, but all the same, a motel…. except it wasn’t – well, it had been but was now sold to families who had been evicted from larger houses during this recession. The guy we spoke to though, told us to head into Pine City – there were two motels there!

It wasn’t far and we checked the two motels – one was full. So back to the first one, The Gail Inn; looked very nice and tidy

We went into the office and jumped out of our skins as a military-looking man appeared from nowhere; he seemed kind of starchy and stiff. he asked if we wanted ‘Smoking or non-smoking’  We said we would prefer non-smoking, but weren’t insistent on it. OK.

Oh, a bit steep, but motels were thin on the ground, so we didn’t have a lot of choice.

Well, the room was too small to swing a cat – we had to squeeze down the side of the bed either side and, at the bottom of the bed, was a garden bench – a very small one; it was the only place to put our stuff on and under. The bed just about fitted my length at 5′ 1″ – so Jan would have overhung by a full foot – if not for the bench at the bottom – so he had to sleep at an angle with his head almost propped up. The room smelled of damp. Carpet formed the wall covering in 2 of the walls.  It was clean though. 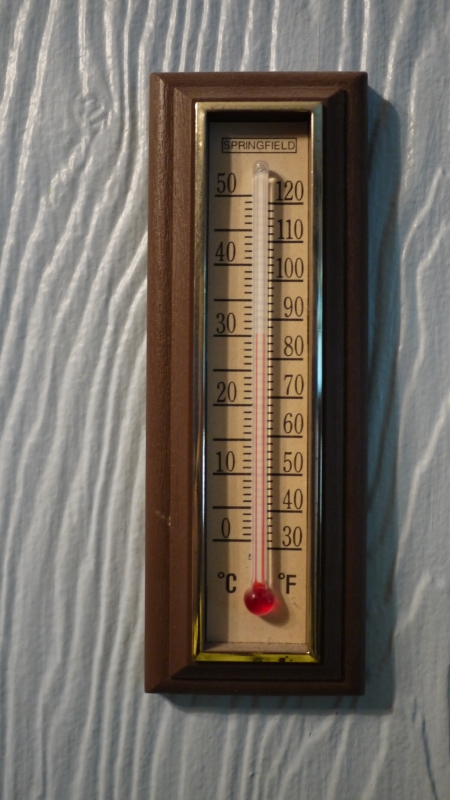 There was a list of rules on each wall; sorry it’s a bit blurred, but the room was darkish

Oh, and the wifi did not work. So I went to the office to find out why. The owner was clueless; I stood at the counter trying to connect closer to the house/office. The bell rang and in walked a totally respectable-looking elderly man – aged around 70-80.

‘Good evening. Do you have a room for two people; my wife and myself?’

‘Well, I don’t mind not smoking on your premises, sir; I can go without smoking’

‘Nope, no can do – don’t want smokers anywhere near mah property’

I felt so sorry for this older chap and I was boiling inside – the bastard was luring people into admitting they smoke at all by, initially, asking if they required a smoking or a non-smoking room. Anyhow, I wrote a review on the place in trip adviser this morning. Miserable git (him, not me, 🙂 )

Well, disgusted, I went back to our little cell and we escaped to the town for a beer and a meal.

Spotted a couple of antique cars – I love classic cars

We were up and off early next morning.

And soon, we were in

We stopped when we saw a lake that looked pink; was this cranberries? We heard that Wisconsin produces 50% of the cranberries grown in the USA.

I had to run back a quarter of a mile to see if these were cranberries – they actually look pink – not red. 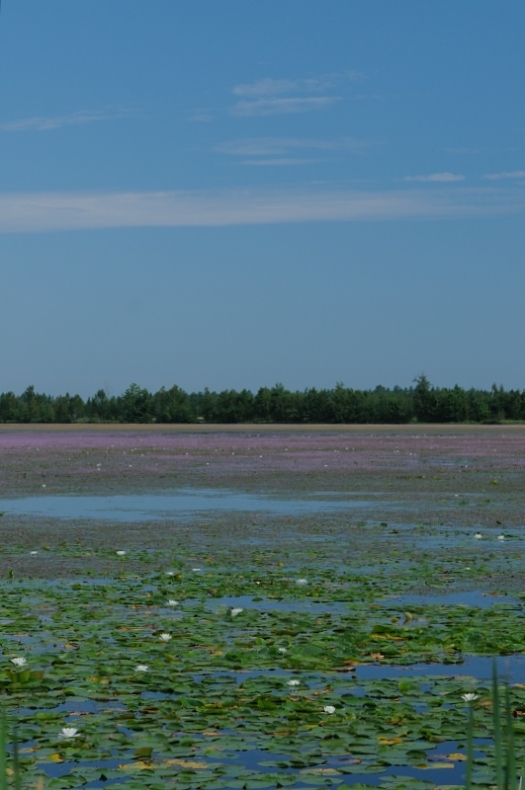 I have since discovered – these are not cranberries 😦

The next town was much nicer than we expected going from the map and a large yellow area indicating a big town; it is fairly large but it is the America I love: real.

There are around 9 motels and, it being early on a Sunday morning, most had ‘No Vacancy’ signs – but, I reckoned the signs hadn’t been turned yet and lots of folk who had had a weekend away would be going home, so at just gone 11 am, we rode into one and asked – yes, they would have a vacancy later today – around 3pm; $79 + tax and, if you stay 2 nights, you get the third night free.  Across the road was another motel so we checked there too – $49 – well, that made sense – still cheaper for 3 nights and, yes, they had a room cleaned and ready. it turns out, the owners of this motel are lovely, lovely people – couldn’t do more to help out – laundry? Use our washing machines. Maps? I’ll go find you a good one and show you the best places to go for photography. Need cloths to wash your bike?n 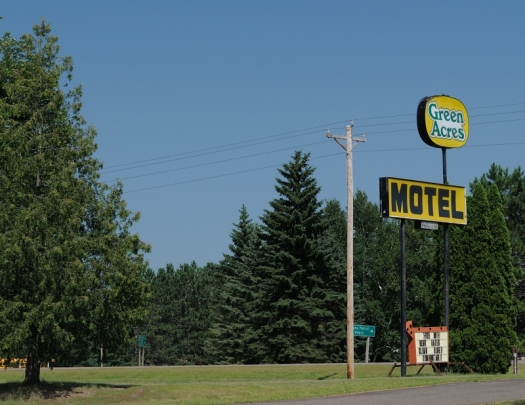 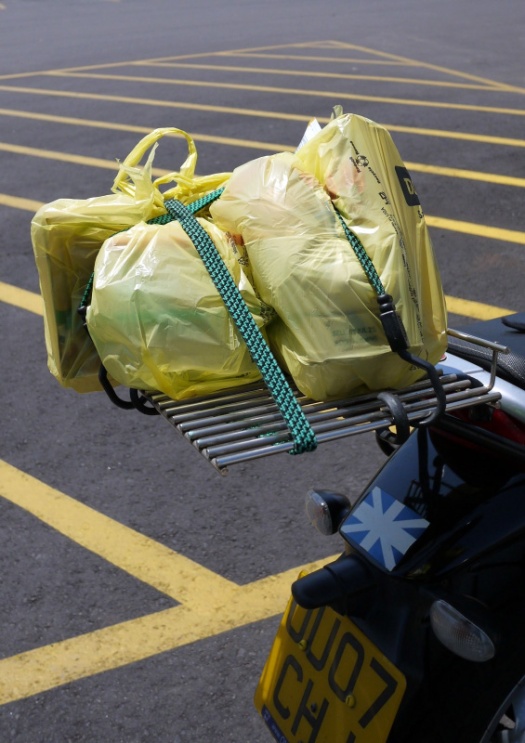 We bought eggs, bread, cheese ham and beer – and went and relaxed back at the motel. 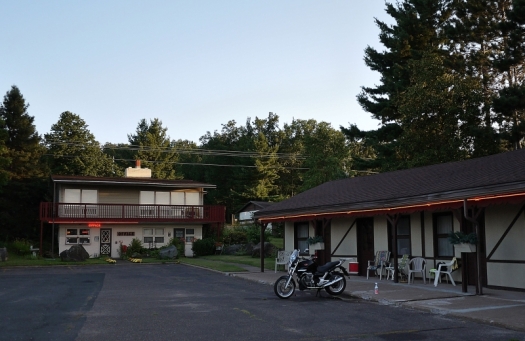 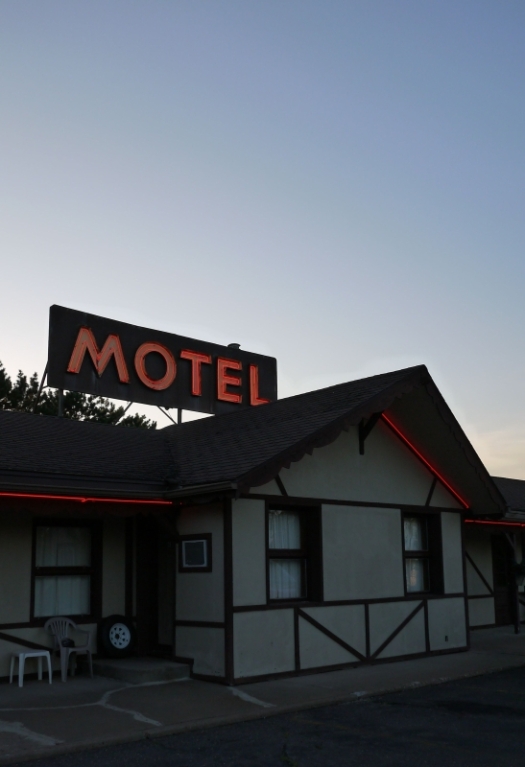 There are bears here and there are eagles and wolves – so we are going to sit out and watch for them for 2, 3 maybe even 4 nights.

Also, this is an American town – the America I grew up watching on TV. People speak to you in a welcoming way – so friendly, so interested, so polite. Here are a few photos from town; there a few from an antique shop that I could spend hours in.
The coffee shop? Last night, we were riding around looking at the local lakes (again there are hundreds in the area) when a cyclist stopped to ask where we were from (courtesy of our UK plate). He told us of pretty places for photography and welcomed us to his town – today we went for coffee and, who owned the place but our cyclist! He refused payment for our tea and coffee (he had real teapots and was so pleased to serve an English person with English Breakfast tea  or, I could have Irish). 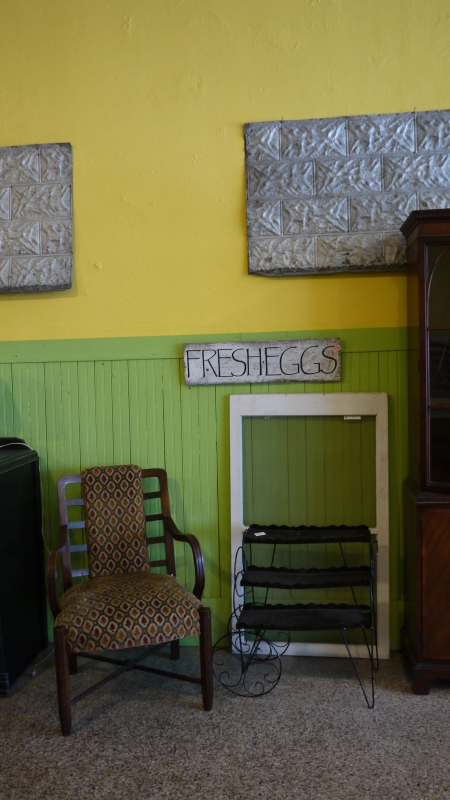 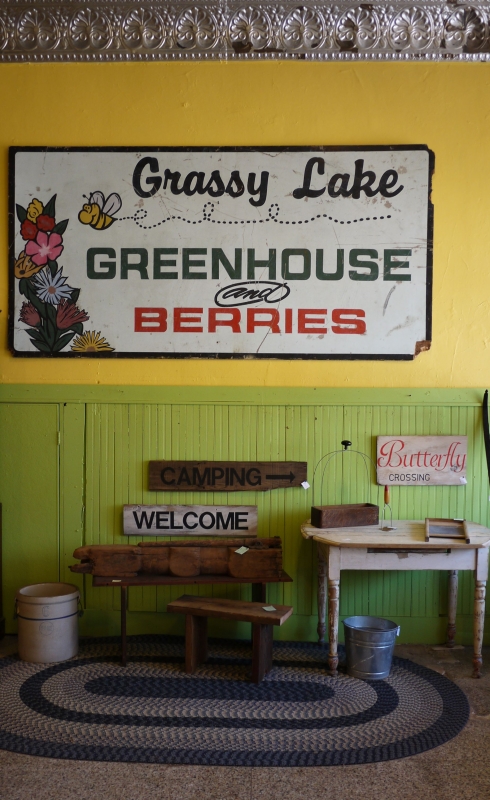 Then, I found some old, rusty train carriages – turned out to be a railway museum; hell, I only had the little Panasonic with me but that was a start – and another reason to stay awhile…. 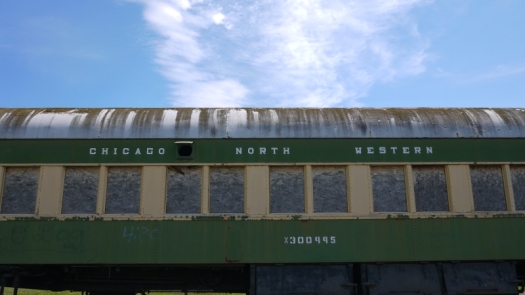 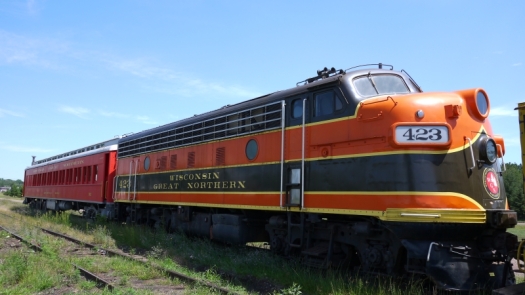 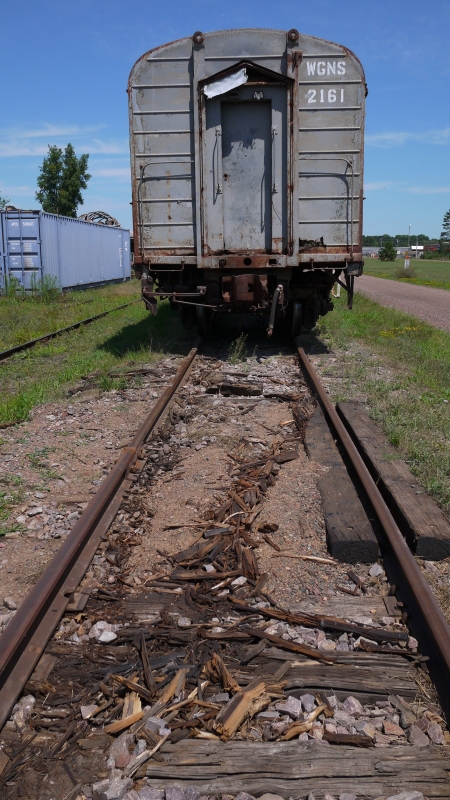 It was hot – we needed a drink (water with lots of ice) so we went into the nearest hostelry and were faced with some poor departed animals (sorry); all animals caught locally

But, enough is enough; I am not fond of animal hunting – I needed some air – and lakes

5 Replies to “23rd July: from Wisconsin”