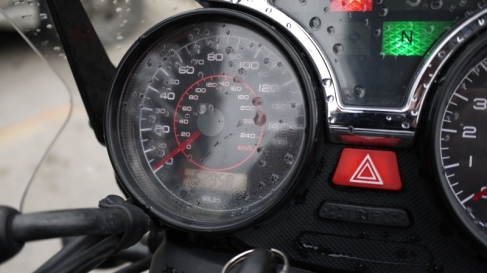 When You Come To The End Of The Road….

This was the mileage this morning – another 150 to add on and we may go for a ride tomorrow, so the final tally won’t be until Sunday but it is around 8,300 for this trip and we are really feeling it now.

To backtrack a little:

Friday the 3rd August: Mike came around after work so Jan could play with his old 50-caliber cap and ball muzzle-loader and learn how to load gunpowder. 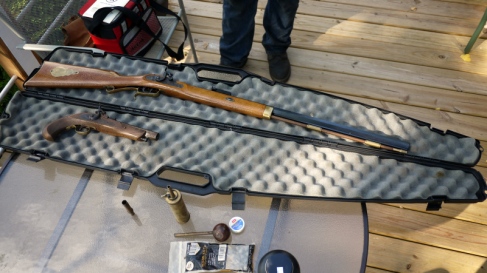 Another from Mike’s collection

Wow, what a BOOM from that!

Jan did pretty good with it too

Mike may look like a Hell’s Angel, but he really is the sweetest of people and very tolerant of me taking photos of him, including draping him in a Confederate flag

It was a fun evening and thanks to Mike for coming around after a hard day’s work and, yep, I reckon you do own the road 😀 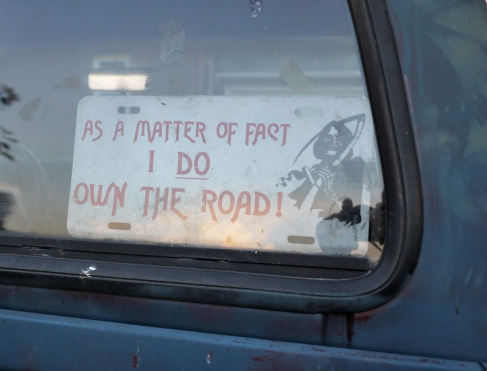 Saturday the 4th:  We had a great farewell party – thanks to the kindness of Mike and Roanne. We were a little late arriving at their house and were amazed to see so many people who had come to say goodbye – there were around 20 people, I think. The barbie was fired up and the tables out ready to hold the food – each person brought something.

Homer and his wife Bonnie were in charge of the bbq. The dogs and cats were on guard duty…. 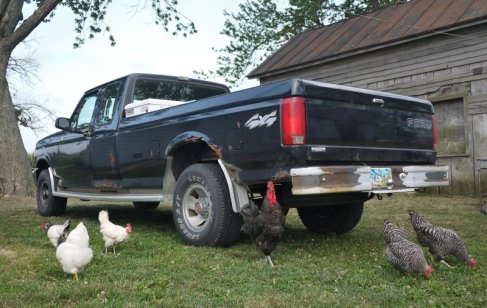 The chickens were risking their necks around the yard and bbq, and Spirit, the horse, decided she would take advantage of the distraction and explore the shed until Anna noticed and had to push her out 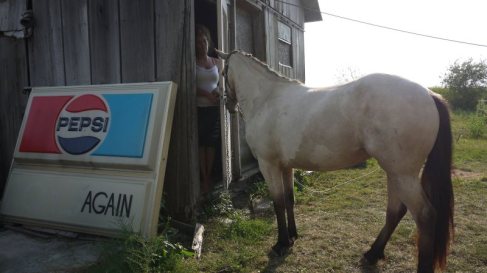 I am soooo annoyed – I had some great shots of the evening – and deleted them by accident (boo, cry, weep). I had to retrieve these from FB. 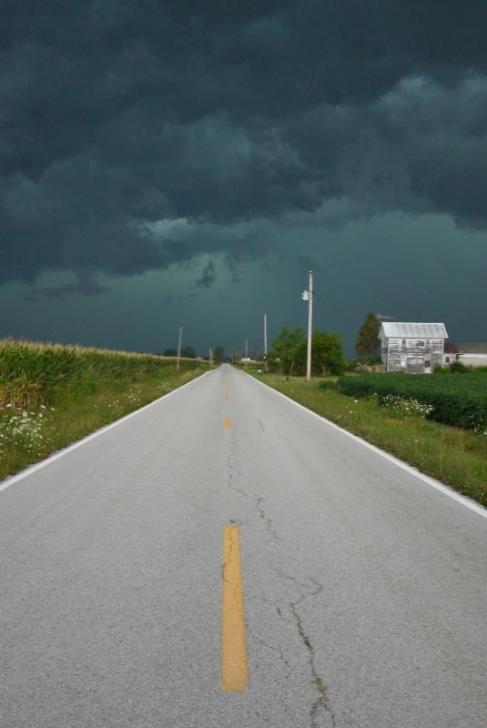 The sky darkened and the flashes of lightning looked awful close. I stood in the middle of the lane taking photos and was surprised to see lots of cars driving off – folk stopping to say goodby and give us a big hug – see you next year. The wind was rising and everyone knew, you don’t mess about in weather like this in the USA so the table had been cleared in record time and everyone made for their vehicles to dash home to close windows and check the weather channel – us included.

At least the early fold-up meant we didn’t have hangovers!

So, Sunday arrived and, following a quick breakfast, we packed the bike, got dressed in our riding gear – sweating buckets the whole while in the high humidity and heat – and gave Pete and Barb a big hug and thanks  and set off down the road, headed for Tiffin – about 20 miles away; we were going to say goodbye to Kathy, a fellow photographer from Photo4me; isn’t it amazing that we meet on the POD site as moderators and it turns out Kathy lives so close to our old friends?

We knew Kathy needed some help installing a new toilet in her caravan/trailer. We stayed the night so we could all go to the marina where the trailer is stored the following day.

From Kathy’s kitchen – a curry lesson; 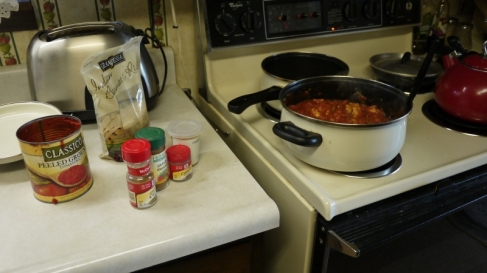 Oh, and this beautiful Morgan was parked downtown 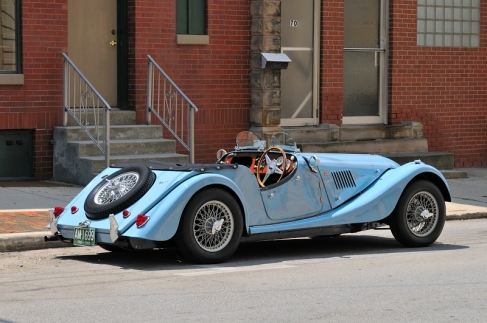 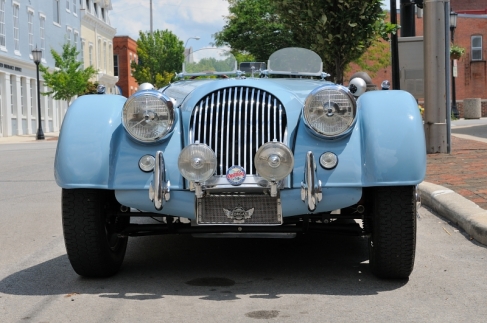 Next morning we set off – Jan on the bike, me in the car with Kathy. Despite the best efforts of the State of Ohio’s attempt to block our exit with the numerous ‘Road Closed’ signs and their not showing a route for a diversion, we did make it to the marina. 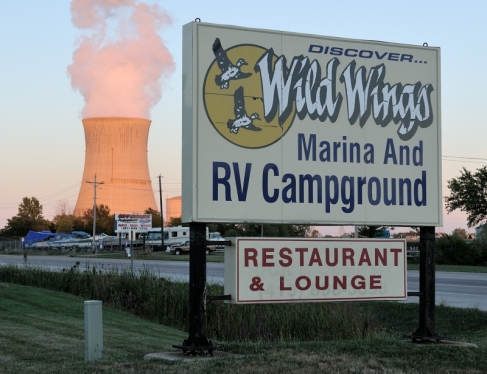 That’s a nuclear power plant in the background.

First priority was to fix Kathy’s toilet – so Jan got straight onto dismantling the old one and fitting a new one.

Job sorted – we could go and do some photography.

On the shores of Lake Erie the area is wonderfully rich in bird life with its numerous swamps and woods – in fact, this is a premier bird-watching spot

But the summer-long drought has all but dried up the swamps – here, I am standing in the middle of what is normally a swamp 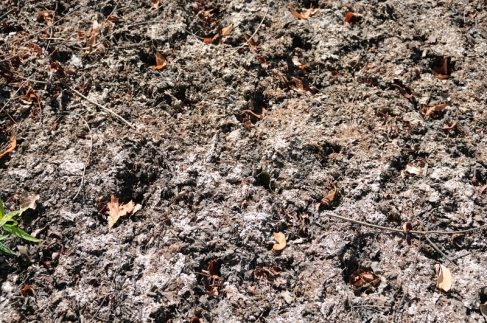 Of course, this is the wrong time to see the migrating or breeding birds and it must be fantastic in spring. We did see some birds though. 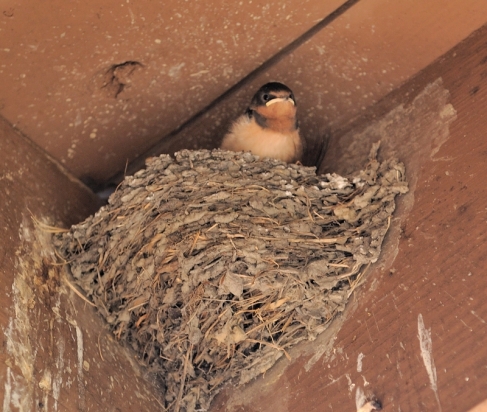 Walking through the Magee Marsh, we spotted a red-headed woodpecker and some Cardinals but didn’t manage to get a shot of those

However, we came to a field full of lilies

That is Kelly’s Island in the distance.

Closer inshore, we came to a gorgeous small lake which was home to lots of turtles (again, no actual photo) 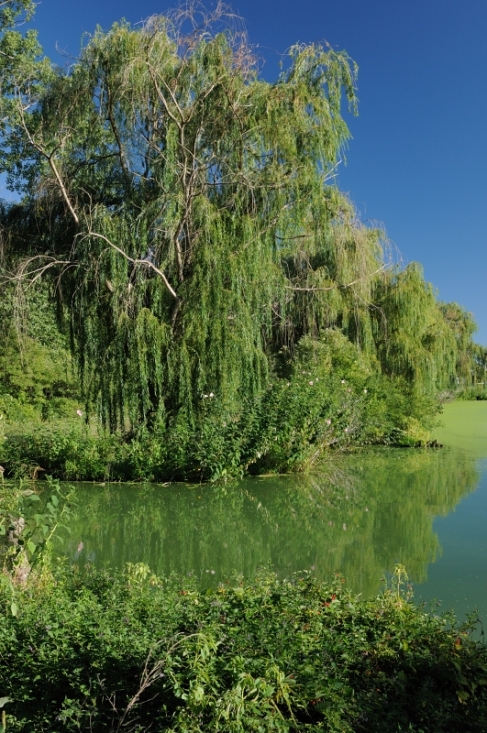 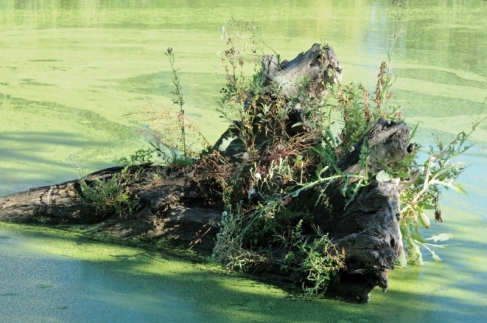 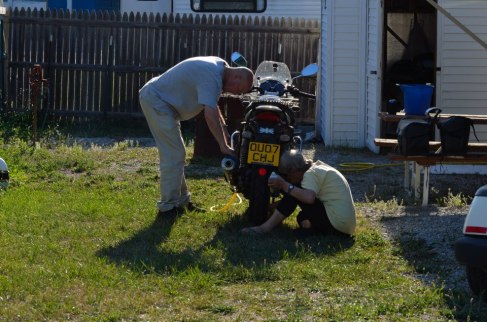 And then it was ‘goodbye’ for now

Many thanks to Kathy for her wonderful hospitality and for showing me so many gorgeous places to take photos. Thanks for the above three photos too – very rare to see a picture of the two of us heading off.

It was 144 miles to Port Huron – 144 miles in which my heart resided in my mouth, especially around Detroit. Horrendous traffic, lots of flyovers and under/overpasses; i hate that ride more and more and swear we will find an alternative – even if it adds 100 miles to the trip.

It was with relief we left I-75 and then I-94 for the peaceful streets of downtown Port Huron. We headed for our usual motel – to find it had gone out of business – argh. We knew the other motels were off the interstate whereas this one was in the very heart of the old town. A visit to Tourist Information and the lady reminded us of the only other one near to the town – The Thomas Edison Inn; I thought, ‘hmmm, that looks awful expensive’ but the woman seemed doubtful about the place, telling us it hadn’t been renovated for many years. Perhaps it might be cheaper than we thought then. Off we went. It wasn’t exactly cheap at $90, but considering its position and faded grandeur, it was worth it. 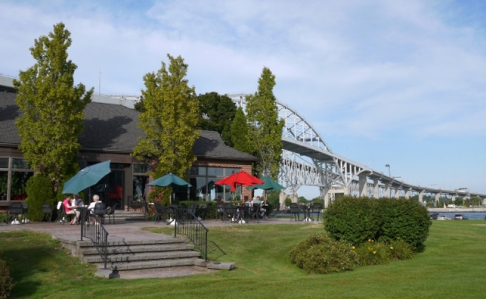 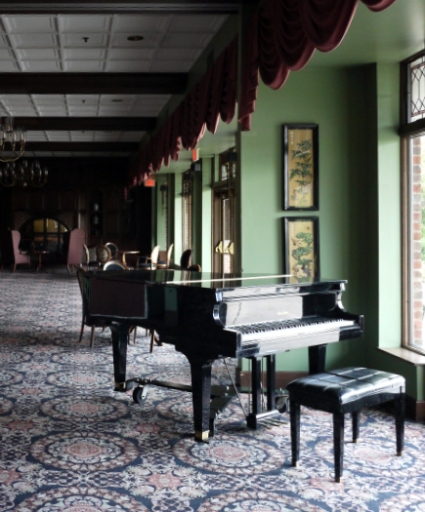 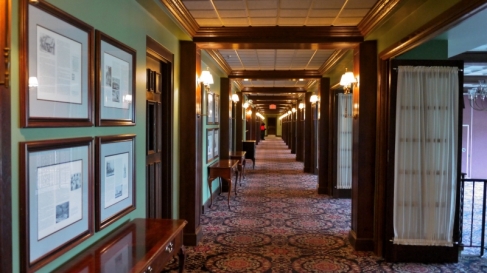 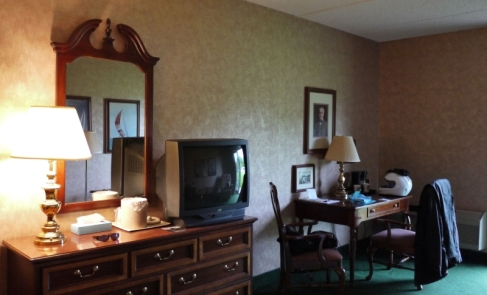 We had a room with a patio door looking over a beautiful lawn and the river.

Some areas are empty at the moment – the hotel is yet another victim of the recession and has been sold off to Hilton who will soon be updating the place so I am really glad we had a chance to stay there before all that 50’s and 60’s country club luxury is stripped out. Being so close to the St Claire river with its busy maritime activity and history, there are many photos of ships – some, such as the Edmund Fitzgerald, were wrecked in the treacherous  waters of The Great Lakes

The SS Edmund Fitzgerald was an American Great Lakes freighter that made headlines after sinking in a Lake Superior storm on November 10, 1975, with the loss of the entire crew of 29. When launched on June 8, 1958, she was the largest boat on North America’s Great Lakes, and she remains the largest boat to have sunk there. Nicknamed the “Mighty Fitz”, “Fitz”, or “Big Fitz”, the ship suffered a series of mishaps during her launch: it took three attempts to break the champagne bottle used to christen her, and she collided with a pier when she entered the water. 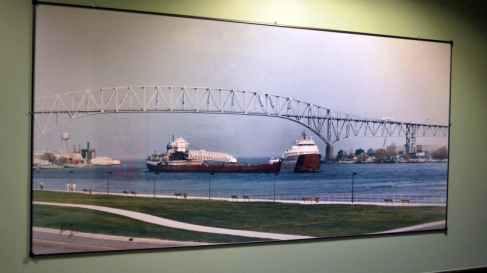 And never have I seen so many photos of Alumni decorating walls – these were all from Michigan and consisted of sports people, teachers, coaches, academics, business men, judges – oh, you name it; this is just one wall – there were plenty of others just like this;

But, it was a beautiful evening and so i went off to take photos of the Bluewater Bridge and the St Claire River then there was the Thomas Edison Museum – all right outside our room

Lots of fishing going on – and lots of fish to catch….

Thomas Alva Edison (February 11, 1847 – October 18, 1931) was an American inventor and businessman. He was born in Milan, Ohio, and grew up in Port Huron, Michigan. He developed many devices that greatly influenced life around the world, including the phonograph, the motion picture camera, and a long-lasting, practical electric light bulb. Dubbed “The Wizard of Menlo Park” (now Edison, New Jersey) by a newspaper reporter, he was one of the first inventors to apply the principles of mass production and large-scale teamwork to the process of invention, and because of that, he is often credited with the creation of the first industrial research laboratory.

Edison is the fourth most prolific inventor in history, holding 1,093 US patents in his name, as well as many patents in the United Kingdom, France, and Germany. He is credited with numerous inventions that contributed to mass communication and, in particular, telecommunications. These included a stock ticker, a mechanical vote recorder, a battery for an electric car, electrical power, recorded music and motion pictures. 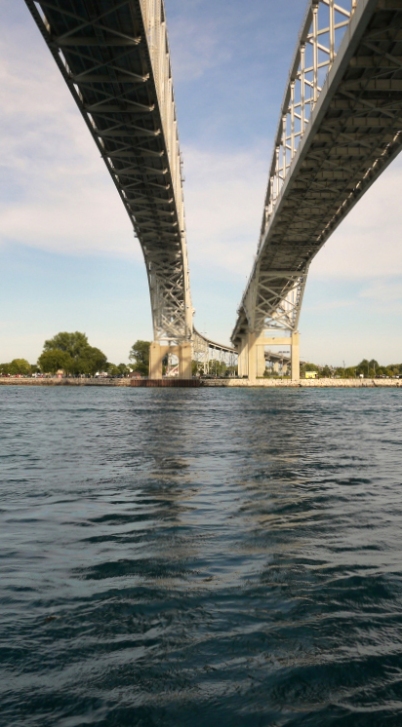 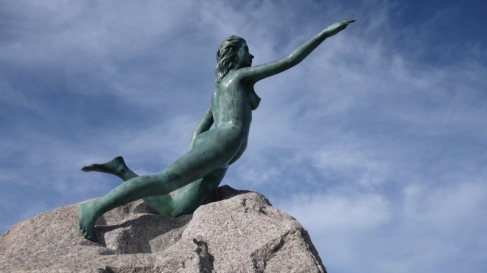 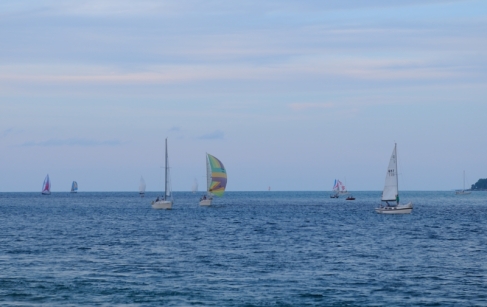 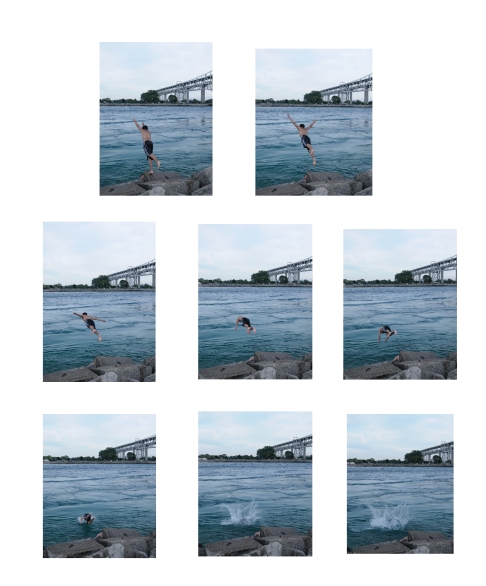 Finally, it was time to return to the hotel – I truly wished I had my tripod with me for photos of the bridge at night – the best I could do was to put the little Panasonic on its tiny Gorilla Pod

Well, there’s yet more to catch up on, but it is now 2am and my eyes are tired so I’ll finish off tomorrow; goodnight for now.