She was filthy – the dust sheet had fallen off sometime over the nine months.

I replaced the battery 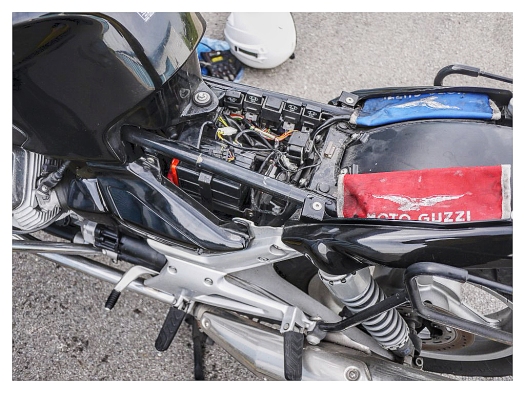 Put the key in the ignition and…….

first try, she didn’t respond. It was the same problem we had been experiencing towards the end of last year’s trip but now I knew what to do; stick a screwdriver in and make the contact. Second time – she fired and burst into life. 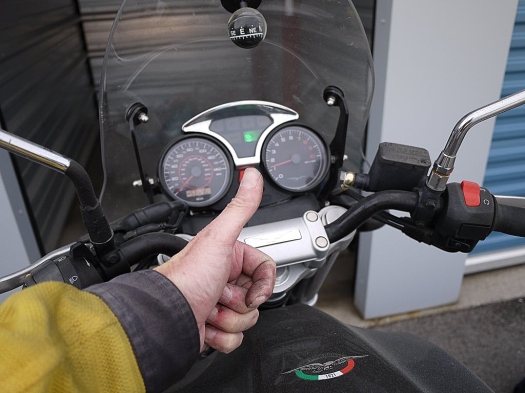 The mileage for the beginning of the 2013 tour is

I loaded up the bike with everything in the lock-up closed the door and we were ready to start the adventure. 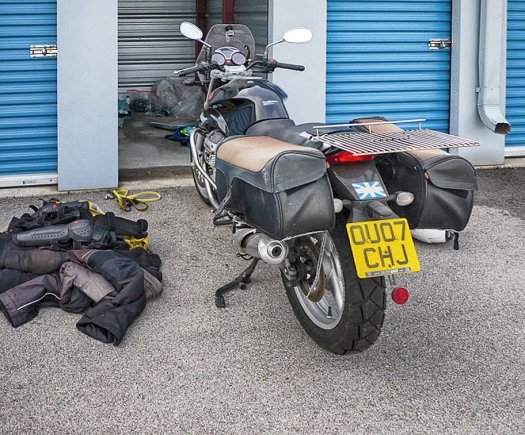 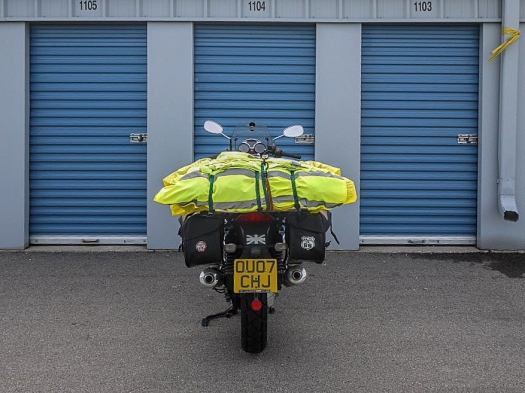 The first priority was to fill up with fuel. That done, I returned to the motel. 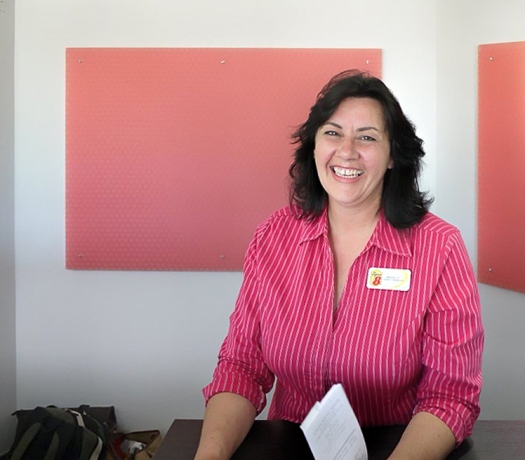 This lady was incredibly nice to Christine in 2009 when, on arriving at the motel, two days before our flight home, we heard that Christine’s dad had died. She brought a lovely bunch of flowers and a very comforting card and left them outside our room. She has always made us very welcome and it was lovely to see her smiling face again.

Now then, time to start trying to organise the packing. Amazing – despite needing stuff for only one person – there still seems to be an awful lot of stuff. Christine suggested I throw her jacket away (after removing her two Moto Guzzi badges and one from the Governor of Nevada for riding ‘The Loneliest Road In America’. 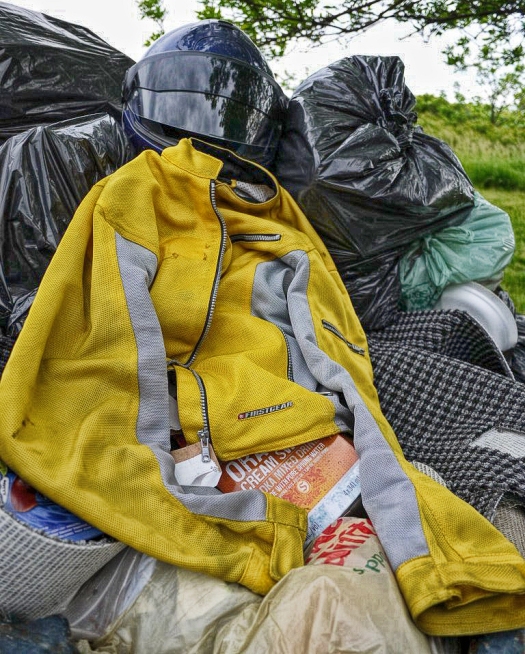 The helmet had seen better days too – it had started to jam. Sometimes Christine couldn’t get it off her head when the lower section jammed halfway up. She had had to ride with it stuck that way one time. Still, it was a little sad to see the well-travelled pair lying atop a dumpster. Christine would have given them a more sentimental farewell, I think.

Well, first thing I have found out, is without Christine, I have much less drinking time, as I now have to do everything by myself. 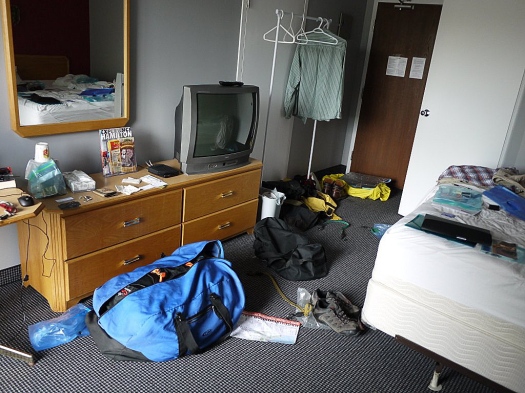 So I started to pack the big bag, and found I was just shifting stuff around, so I shot off to Wal-Mart and got a load of Ziploc type bags, Gladbags have a great wide easy to close seal, whereas those skinny 2 lines on the real Ziploc bags can be a pain, especially after a few weeks use. Unfortunately, only Ziploc make the big L – XL – XXL storage bags, or at least, I have never seen other brands with bags of that size.

Then it got fairly easy, stuffing stuff into bags and actually packing them. However, not yet in the routine of things, I ended up packing stuff too soon, I was very proud of how I had got the big blue bag sorted and the new Day-Glo yellow rain wrap tightly wound around it. Well, right up to the moment when I realized, oh hell, my shaver was in the middle of that lot, and no way was I going to unwrap it all for a shave next morning.

Breakfast opened at 0600 so I was up at 0530. I looked out the window and it saw thick overcast low cloud and rain. I had a shower, got dressed and went for brekky.

By 0630 it had stopped raining so I got the bike packed and was on the road by 0700. GREAT! There was hardly any traffic anywhere, so it was a bit over max speed, on the interstate.

By the time I had ridden 93 miles, I was feeling really cold, so I pulled into a Tim Horton’s, for a coffee and a couple of Chocky Chunk Cookies. On leaving, I looked up & decided it was time for the rain jacket.

The first fill up was after 109.4 miles; from then on, I didn’t stop for coffee or anything; I just cracked on.

This year, thanks to info received on last years trip, I was going to
use a different crossing. Some half way twixt the 2 bridges is the little known ferry secret called the Sombra – Marine City. 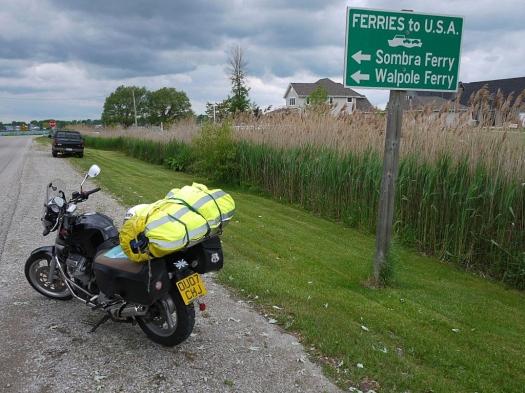 The Peelee Island ferry from either Leamington or Kingsville, but does not always have a suitable timetable. The bridges usually take ages go through border control to due to long queues of vehicles.

At Sombra, I was waved on to a small ferry, carrying three rows of four cars; I was last and wedged the bike in to one side. 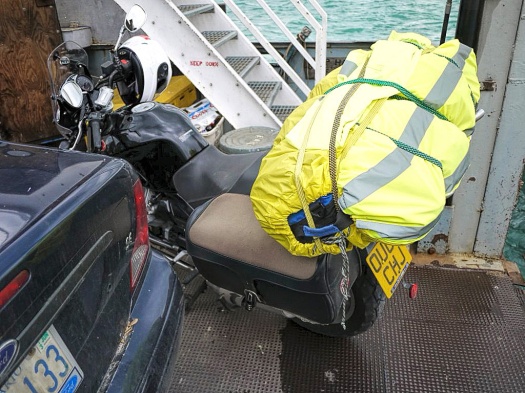 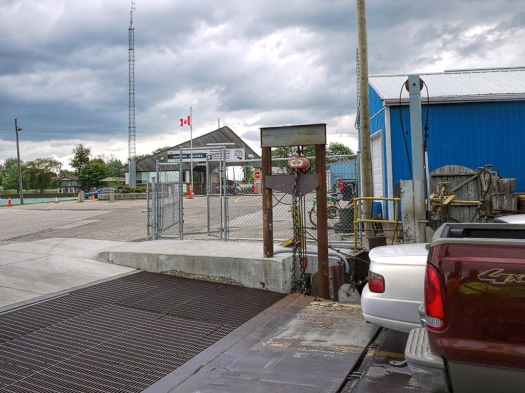 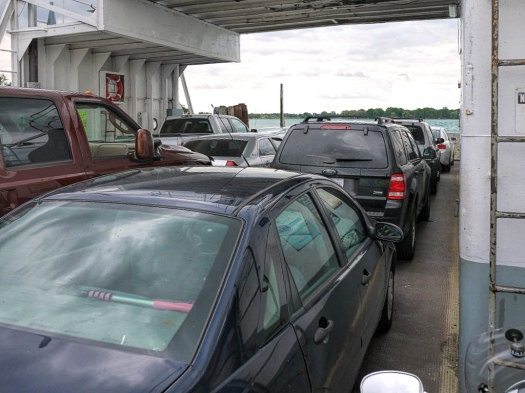 Ten minutes later, I was in America……Yay Hurrah! 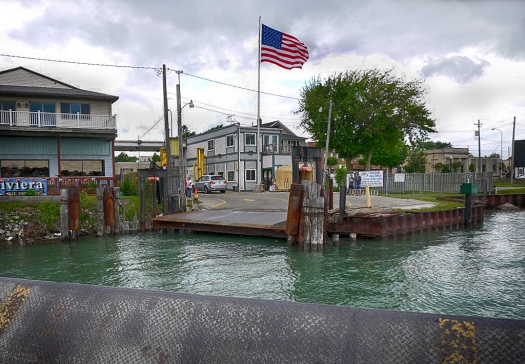 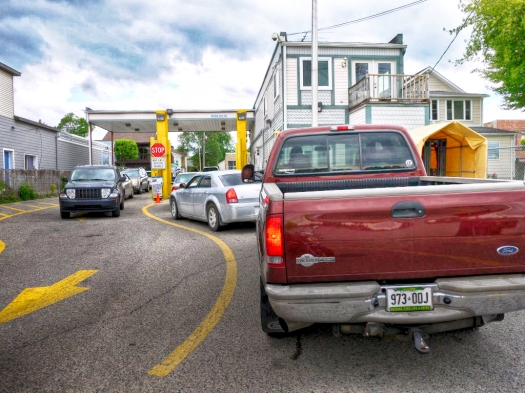 My elation was cut short, by a very apologetic Homeland Security chap. I’m really sorry Sir, but the Canadians should have stopped you from crossing, Our systems are down so we cannot process you at this time, so we are going to have to send you back when the next ferry leaves in 10 mins. You will have to check in through either one of the bridges! Crap! Big Time. 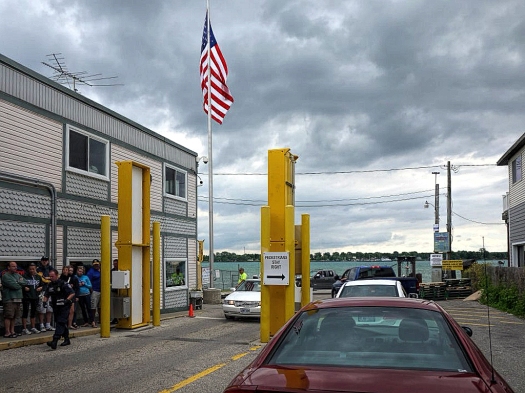 Well the Homeland Security guy gave me a paper for the Canadian Customs, and 10 mins later I was on another ferry, going back again. 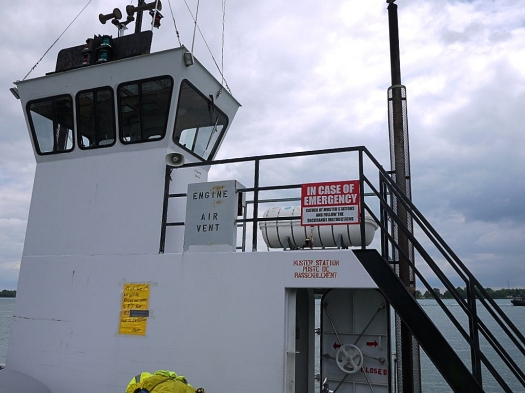 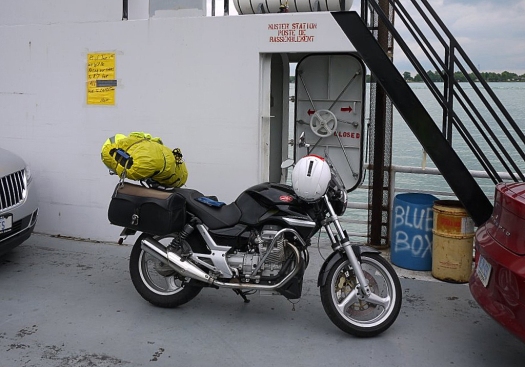 Back in Sombra, I handed over the paper to the Canadians, ” What? Their system is STILL Down?”

I rode a very scenic road along the river, headed for the Northern bridge, Sarnia (Ontario) to Port Huron, (Michigan) as it leads straight to the interstate for my destination, Lansing. 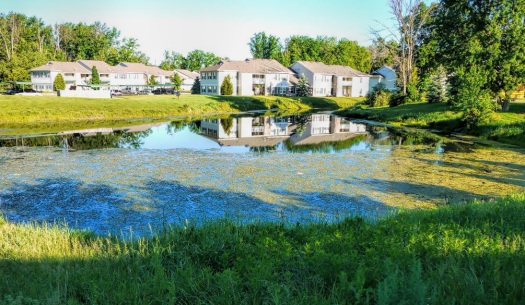 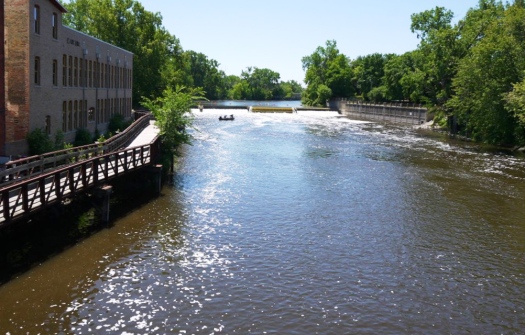 There was some sort of big festival going on in Sarnia, but I didn’t have the time to see what it was.

I had now ridden another 102 miles so I pulled in to a filling station, went inside and put a $ 20 on the counter. The young woman behind the counter looked at me and asked, “Bronze, Silver or V Power? “I looked at her and said,  “the top one, 91”.

She repeated, “I have to know if you are going to use Bronze, Silver or V Power” I looked at her and said, “Look out the window, and see where it says 91 in BIG numbers?” She didn’t look at the pump, just repeated, “So do you want Bronze, Silver or V Power?” I had to go look, OK,  “V Power!” So I filled up and went back into the store. She looks at me and says ” you have not finished filling up yet, you have not used all of the $20 ” So I said, ” The ATM only gave me $ 20 bills, and as you can see, I am on a motorcycle, It is now full, and I have come for my change” Her brow creased, and I could see there was some deep thinking going on in there.I was about to suggest she phoned her supervisor, but as I opened my mouth she finally came to a decision, and gave me my change. I honestly thought she was going to try & fob me off with an in-store voucher.

I carried on to the bridge, with a surprisingly low amount of traffic, so by 14 15, I was cleared into the USA.

By then I was rather hungry, so I pulled off I-69 at the Imlay City exit, as I needed US cash first, and figured a place called a city was bound to have a bank, and so it was! I got cash, and promptly went into a Wendy’s for a burger  & fries at 1500. I ate that quickly and got back on the road again. It was cold, but I was now so close I just wanted to get there, and I got to my hotel at 1700. 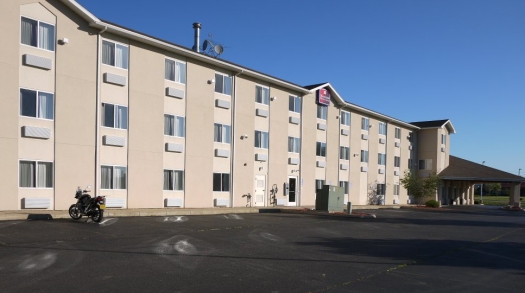 However, getting into reception proved a bit problematic, as my hands were now so cold, I couldn’t get my fingers to work, so it took ages to get my crash helmet off. 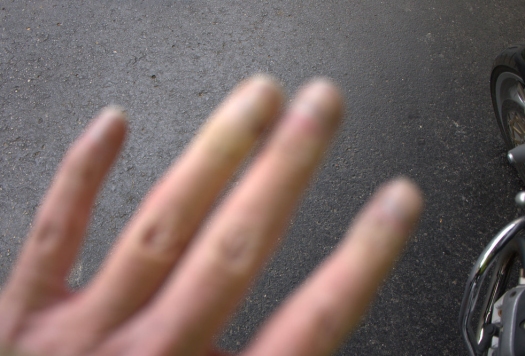 A  bit blurred but I couldn’t focus properly because I was dithering, but you can see the colour of my fingertips looks a bit dead.

Finally, once inside, the clerk asked if I wanted a cup o coffee to warm my hands on, as there was a fresh brew in the corner I said,  “Do I ever!” I told him I wanted two nights, possibly a third, depending on the progress of the bike service. Slowly my fingers got enough movement back to allow me to fill in the forms. While doing so I asked where the beer place was, some miles outside of town? “Ah well if you only want BEER, you can get that at the local Meijer store about of blocks further on”.

I didn’t have any luck getting an internet connection on my netbook so I had to ask the guy in reception to help out. After a good 45 minutes of trying, he finally got my notebook to connect to the motel Wi-Fi. Now I could get hold o Christine before she went to bed, and I was also using the time to warm up, get a thick Helly Hansen shirt on, and when I felt ok, I took off on a beer hunt.

However, the guy didn’t tell me I would find the beer behind the Meijer filling station! I saw the big Meijer sign and pulled in. Ha, very handy having a place to fill up with fuel as well as buy some beer. I filled the tank with another 125.8 miles on the counter and went looking for the brew, finally I gave up and had to ask, “Ah we do not sell alcohol here, get that at the main store “

Well once I got directions that it was less than a kilometre away, off I set again.

While in Hamilton I had looked for some of those flat bungee straps that we usually buy in Wal-Mart, but they were sold out, Meijer had them so I got 2 different lengths, also, normally Christine does the piccys and the fuel log, and she has a backpack to have all that sort o gear in, I was finding it difficult to get hold of the different things that I now had to stuff into my few pockets, so as I passed the Sporting Goods section I noticed a rather large bum bag, or fanny pack as they call them over here, so I got one and will experiment with it tomorrow.

Then, suddenly I was in the BEER aisle, and after much humming and ah-hing, I decided on a 6 pack of Smithwick’s, a New Holland Oatmeal Stout, called The Poet, a Raven, for some connection with the famous Port Huron Bar that Christine and I love!  Finally a six of Sam Adams Blackberry Whitbeer, so I am settling down nicely at the moment, knowing I don’t have to ride far for the next two or three days. 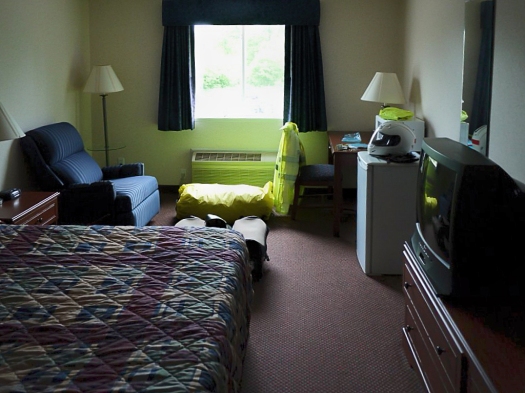 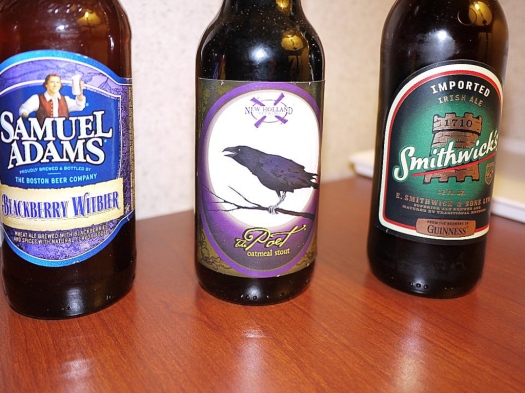 In Wall Mart in Hamilton Canada, I noticed a new kind of pencil, a Liquid Pencil. I thought that it was worth a try since that probably wouldn’t tear the paper if doing notes in rain or drizzle; well, either I have a dodgy one, or the Liquid Graphite pencil development has a long way to go yet! You have to hold it completely vertical, or it writes like a pen running out of ink. Even vertical it is still scratchy. Hmm, perhaps being exposed to the cold clogged it up; I think ill just leave it here for the next guest.

Tomorrow – the bike goes for service.