Jan has not had any internet connection for most of the past week, but here is a quick update.

The damage to Pete and Barb’s house was not as bad as he expected (thank heavens) They have been trying to fix some of the ridge tiles on the apex of the roof but it has been difficult trying to rig up a ladder to the steep roof to try to replace them. It seems that the part of Ohio they live in do not sell (nor seem to have heard of) those ladders with the curved top to enable you to hook the top of the roof. But Pete and Jan have been able to rig up something or other to enable them to get up in the roof.

The porch is mostly still there. I remember last summer – Pete and Barb were busy, in their time off, re-building the porch (deck) so I am glad the whole thing is not destroyed. 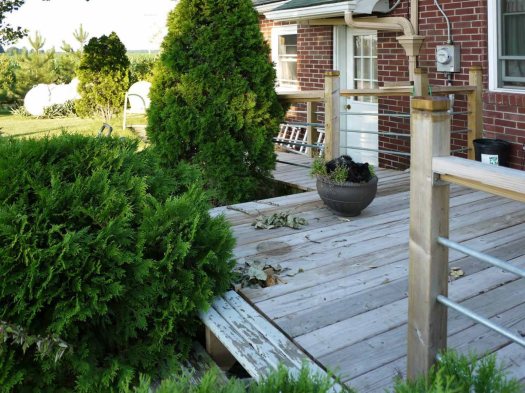 But the three of them – Pete, Barb and Jan have been working hard to put things to rights.

The other problem has been with the bike – not the Guzzi itself, but the DataTool alarm. The bike was failing to start – turning over fine, but not firing. It took some investigation to discover it was due to the 15 amp fuel pump fuse that the alarm is sharing use with. It kept fusing. Jan replaced it twice and had to charge the battery but, it happened a third time.

We decided I would email Data Tool here in the UK.

We had a Datatool fitted to brand new Moto Guzzi Breva 750 in 2007 by Onyerbike dealership. The Datatool is powered from the 15 amp circuit that activates the fuel pump.

Suddenly, that fuse is blowing on a daily basis.

Yesterday, the LED was no longer flashing every 5 seconds and he could not put the alarm into ‘Winter Mode’. Alarm disarmed, he turned ignition on. When the two buttons of the Datatool fob were pressed for 10 seconds, all that happened was the four flashers came on (indicators). Once he found the fuse problem and replaced the fuse, the alarm immediately went into ‘Winter Mode’.

But, next day, the fuse was blown again – after one night in winter mode.

Is there any scenario, after 6 years of use, that the Datatool could be drawing more than 15 amps and blowing the fuse?

They were amazing – I received an immediate response and the suggestion that the alarm be disconnected for the time being.

Jan thought that was the best option and asked me to email for instructions and a second email received within minutes gave clear instructions on how to do that;

No Problem Christine. I think because of the fuse situation that it’s his best option so he needs to proceed as follows;

2.      Remove the steel box around the alarm connectors held in place with 4 x tamper proof screws the box in question can be found approx 6” from the alarm control unit it’s quite a small box.

3.      Disconnect the White 10 way plug and the 2 small Black plugs and leave disconnected.

Well Jan did all of the above – but was unable to join the two wires – he needs some kind of wire loop to make the connection and could find nothing in Pete’s workshop. So he put everything back together and hoped for the best. Which happened for one day. Then the problem recurred.

He has since removed the fuel tank to see if any wires are trapped – he wasn’t 100% sure the problem was with the alarm or the wiring to the fuel pump. There were no trapped wires to be seen – so he put it all back together again.

Anyhow – he has been unable to use the internet – Pete and Barb don’t have broadband and the nearest place he can get online is at the library – about 8 miles away.

He set off this morning (Saturday 20th July) and is heading up through Michigan – maybe to go see Larry at the Moto Guzzi workshop – maybe not. He isn’t sure.

That’s all for now.

One Reply to “A Short Update”