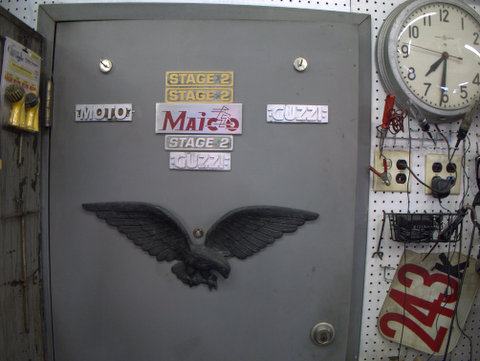 What an unexpected treasure in Evanston, Wyoming; ‘

Yesterday afternoon I had an unexpected but very welcome surprise. I was lay on the bed watching TV when there was a rap on the door. It was very hot and the air con wasn’t up to much so I was down to my undies only. I scrabbled around for something to throw on and then answered the door.  I didn’t know the guy standing there but he introduced himself as ‘Doug, the guy with the Guzzis’ This was the man Bruce had taken me to meet the other day and who had been out on a bike ride.

I invited him in whilst I washed and got dressed and then we went over the maps and the routes, I have done/plan to do. Doug told me the Moto Guzzi Rally is in Iowa this weekend. Doug needs to put new tyres on his own Guzzi and then he will be heading there. We then went to the workshop.

His workshop/garage is unbelievable, an absolute delight of a motorcycle Aladdin’s Cave. Doug is a Moto Guzzi restoration specialist but he has lots of other fantastic bikes – some very rare, many of them in immaculate condition – prize-winning even. He also casts and machines parts.

Doug took a stock Le Mans 850 to the Salt Flats, and giving it everything he had, got up to 129.875 mph. Just not enough to get to 130. But impressed the heck out of all the onlookers, as everyone else in class, were running modified Ducatis. He also did the tuning on a Guzzi 750 that reached 127 mph

When Doug’s son built the  ride-in wheel, the only tyres that would be suitable had to be imported from France. The size he needed is used in the vineyards, as a smaller version of the tractors  that work American cornfields.

The only available rim, of that diameter, is the rim in the foreground on the photo above. It had to be carefully cut apart, then the outer edges  welded together to make the rim for the tyre.