A couple of days ago, as you know, I was  talking to  Doug Easton, in Evanston, Wyoming, as he showed me his incredible collection of motorcycles, and that is when I found out  that  there was to be a Guzzi Rally in Elkader, Iowa, this coming weekend!

Well, I had promised Larry I would go & see the National Motorcycle Museum, in Anamosa Iowa. so this gave me the opportunity to cover the two venues. I google-mapped and noted towns close by then tried to make a reservation in a motel close to the museum. Nope, every motel was fully booked. But then I noticed that Manchester, Iowa – right  on route  20 – was just about half way twixt the museum and the rally.

With that in mind then, I left Evanston with a plan to stay in Casper but, again, it was full due to some sort of event.  So I carried on to Douglas; that too was full with work crews. I didn’t find out why, but probably oil, gas or road/construction workers.
That day I ended up riding 548 miles, to Lusk, where I had stayed last  year. I got the last available room in the motel and shot off to get something to eat.
The diners were shut, but I found a bar, where they had only just closed the kitchen, but the staff kindly offered to make me a pizza, so I had a couple of beers, while they did the small pizza.
When it arrived it was a good and not too large. I ate as much as I could – then had another slice so they wouldn’t feel that I didn’t appreciate  that they had  done this for me specially due to my long ride.
It was great; right up until about 2 am when I woke with screaming indigestion and not an antacid in sight.
Needless to say, sleep was in fits & starts.
First thing next morning, after packing up,  I found the local drug store and bought a box of Zantac, swallowed a couple and then set off towards the not-so-promising sky ahead.

Rain clouds began to gather and I had to stop to put my waterproofs on – but in the event, I didn’t get wet. 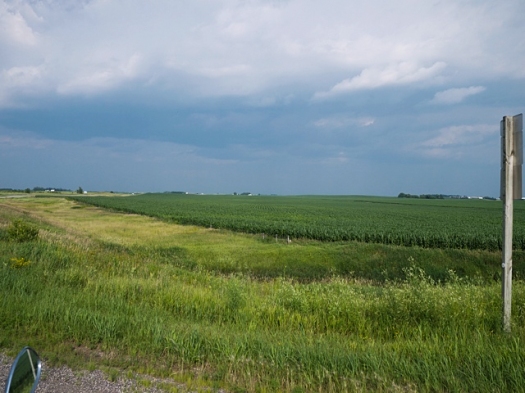 I rode the 272 miles from Lusk to Valentine, where, on a fairly early arrival, I found a motel. I used the internet to skype Christine and check the weather and emails. Then promptly fell asleep.
As you may remember, either last year or the year before, the national Guzzi rally was hit by a flash flood; lots of people lost their bikes, the demo trailer was washed away and the all new models went riding off downstream…. in short, a disaster for all concerned.
We’ll, this year, on checking the weather, the forecast was for thunderstorms around Elkader – where the rally will be – on Friday, Saturday and Sunday. So, that ruled out my plan to camp:
A, I do not want  to see my bike being  washed  away and, B, during my military career, I have lived in puddles. Those days have gone !
Anyway, now I have ridden the  518 miles from Valentine Nebraska to Manchester Iowa, and to my great surprise, I found out that despite its size, Manchester, Iowa has only has 2 hotels.
As you know, Guzzimomma & I try to avoid the chains and use the old mom & pop, park-outside-your-door motels. Unfortunately, in Manchester, there are 2 Chains choices; Days Inn or Americas Best Value Inn. I was recommended to try the Days Inn first, so I did; it was full, due to, YES, another Fair…..  Oh Bugger………. I had visions of having to ride through the night  to find somewhere with a vacancy…….But….At Best Value, they had 1 single room left.
I asked about WiFi, and  the guy assured me that the signal was  good, if not excellent, throughout the hotel and, joy of joys, the last room was on the ground floor. I booked 4 nights straight away, phoned momma to let her know  I had a room, then set off in search of  food. I had noticed a Steakhouse, right beside the Days Inn,  not far from where I am staying,  so I got in there, and the kitchen was still open. I chose a starter (American starters are as big as European main courses) of Ribeye strips with sautéed mushrooms and a choice of 2 sides; I chose the wild rice and steamed  broccoli. That, was a full meal for me, and it was very good.
Tomorrow, I will head for the  National Motorcycle Museum and spend the day there.
Hopefully the  forecast thunderstorms will miss here.
As I have booked 4 nights so I can cover the museum, and the Guzzi rally the following day. Meanwhile, check out this beauty – a 1938 Dodge D2 (Manchester, Iowa) 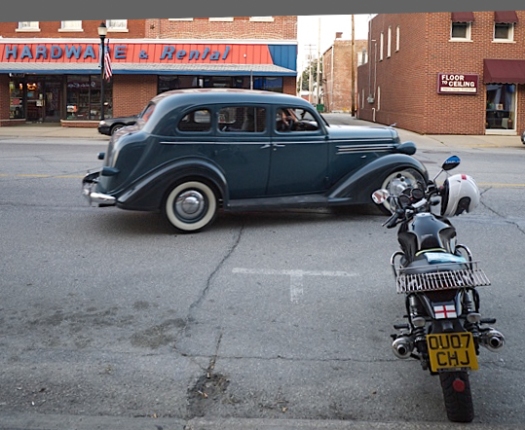 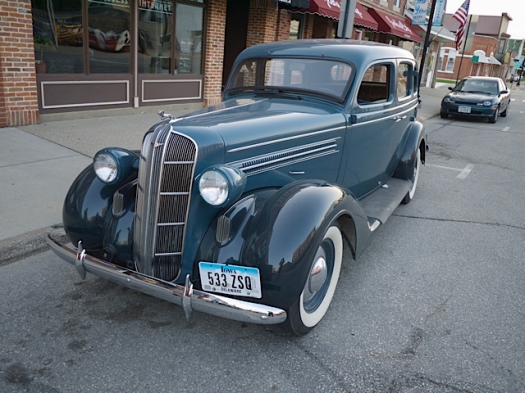 It is now past midnight here, so I am going to bed. I have set my alarm for 0730 for breakfast before riding the 39 miles to the Museum, that opens  at  0900.
Take Care Out There
NOTE: Christine here. I have the photos (92 of them) from the museum and I will put those on the blog asap.