I didn’t hear from Jan before going to bed and, as always, it is difficult to sleep – I lie in the dark picturing him lying on a deserted road, injured or worse; or even a simple thing like, the bike has gone over and he can’t get it back up again. There have been a couple of times that that has happened and, even with the two of us, we have really struggled to get the bike back up. I remember we once hit some gravel in a lay-by and the bike fell over and down into a ditch. Fortunately, a passing truck stopped and a big, tattoo’d biker-type guy got out; we got the bike upright and then, the guy and I pushed while Jan revved like mad, flicking dirt into our faces and we finally got the bike back up the slope.  One of the problems with being on some of these deserted roads is, there are no signals for mobile phones so, you really have to rely on some passerby turning up.

Anyhow, I took the landline handset to bed with me. I watched some tv on my iPad and dozed intermittently. Then, at 2am the phone rang; it was Jan. It was about 1930 there – he was just inside Utah and had stopped to fill up – he had REALLY, REALLY, REALLY needed to fill up. It had been 180.1 miles since the last gas station!. Our manual says we should get about 175 miles from a full tank.  What good fortune! Jan could hardly believe it – he said there wasn’t even any sputtering from the bike. The last time we were in danger of running out of fuel was on a very remote road in Utah.

Jan was planning to have a coffee and a Yorkie (a minty chocolate biscuit) and then carry on through the night. I tried to persuade him to find a motel but he wanted to carry on. He had been in yet another downpour and was worried about the electronics and things in the bag being wet. Before leaving the motel that morning, he had decided his teeshirt needed a wash so he thought he would wear my low-sweat one; only to find that and lots of other things sopping wet! He had been too tired to empty the bags the night before and so, he had to put the wet things into bin liners and carry on wearing his (now) pongy teeshirt.

I can’t quite remember which town Jan said he was in but i think it was Thompson, UT and I know he planned on staying on I-70 to St George, another 321 miles away. I am guessing this is the route he should be on at the moment. 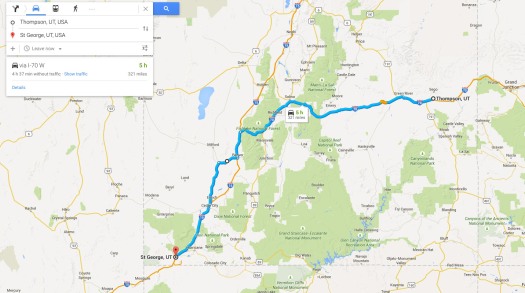 The highest mileage on one tank of petrol prior to last night was 177 miles. That was when we left Torrey and rode through Capitol Reef National Park. We were intending to turn left at Hanksville and ride the 20-odd miles to I-70 and make our way to Moab.  Knowing (or thinking) we were close to an interstate, we stopped at the gas station (one of only 2 buildings – the other building was also a gas station!) but decided not to fill up. Instead we grabbed all the cold liquids we could – the heat was unbelievable and we both glugged down around 3 litres of fluids each. But, no, we didn’t fill up with gas.

The ride was breathtaking; typical Utah desert and the meandering Colorado River to our right hand side (Hite Crossing on the map below). We took a tumble just after crossing a bridge over the river when we decided to stop, do a U-turn and go back a little so I could take some photos. But on the u-turn, the bike went over – right in the middle of the road!. Now, there is little traffic on these roads but, we both had the same thought and never even verbalised it – just reacted! I know I had an image of an 18-wheeler Big Mac truck coming over the summit of the hill just ahead and, not seeing us in time, crushing the bike and the two of us. As one, we, somehow, summoned the super strength to get that bike up first try. It was as though we had just had some of Popeye’s spinach and grown huge biceps.

We continued on and, it wasn’t until the sun started to sink into the west…. wait, the west? We were supposedly heading east! We checked the odometer and slowly came to the realisation we had taken the wrong turning out of Hanksville and instead of heading to I-70 (which we should have hit HOURS before) , we had take HW95. Admittedly, the road was well worth seeing but BUT, we had not filled up in Hanksville!. From then on, we kept a steady speed and Jan tried not to change gears unnecessarily; anything to save fuel. The sun sunk below the horizon (well, the huge red rocks) and the temperature began to see-saw; hot when we were near to the heat-absorbing rocks, and freezing when in the open desert. Finally, we could see some lights ahead (at the time, we didn’t have a detailed map of that area – we had not planned to go that way). We just hoped and hoped; the low fuel light came on when we rode uphill and it went off when we rode downhill. But we did make it to Blanding – just as the gas station was closing at 10pm. The young man let us fill up and gave us the last 4 hot dogs for only a quarter each.

I have just printed my boarding pass, set the alarms for 0400 and just have a few things to do before bed – such as pack my computer away, final empty of the fridge and the bins and – hopefully, hear from Jan well before bedtime.