Thursday evening, there was nothing we could do other than have a couple of beers sitting on a comfy rocking chair in front of the motel and watching the sun set. Jan was just hoping the man from Car Quest would have a suitable battery in the morning. Myself, I was filled with trepidation about how I would get on and off the bike. I don’t think either of us slept very well. Before dawn broke I was off out with my camera to take some dawn photos and then to grab breakfast at Denny’s – neither of us had eaten since breakfast the day before; the heat just wipes out your appetite. Back at the motel, Jan was showered and dressed and waiting for eight-o-clock so he  could return to Car Quest and pick up the new battery.

He returned 20 minutes later but not with a new battery, just the old one; they didn’t have a suitable one at the other store after all. He suggested another place way out of town but when Jan went to order a taxi in the motel office, the manager suggested he try NAPA just a couple of blocks away. Another 45 minutes passed and a smiling Jan returned – drenched in sweat from the heat which was fast approaching 40 C. But on putting the battery next to the battery space, it was obviously not going to fit. Argh! Off Jan went back to NAPA praying they had a smaller size; they did. And by 10am, we were back in business. While Jan was battery hunting, I had been packing the bags ready, so now all we had to do was dress in the bike gear. I didn’t say much because I was dreading having to get on the bike again. Fear or worry can build up and up but, I find, I find it is best to stay quiet and push the worry down and keep a lid on it; otherwise, it will get the better of you. When we were sailing, setting off across oceans, friends thought we were so cool about it and didn’t worry but I always had a deep dread of setting off and could only deal with it by keeping stump. And, I have to say, the packing takes a little concentration….

We loaded up the bike and then dressed. Now there was no avoiding it; I had to get up on that bike. I really wished we didn’t have an audience of motel staff and guests to watch but….. Hey, I did it, I did it! It wasn’t nubile and it certainly can’t have been a graceful thing to watch, but I got up ok ( I had been doing some leg-stretching exercises while Jan had been out) The motel was on a main road with a central divider so Jan had to turn right and, quite quickly, do a U-turn. He actually took a left to a side street which was a hill and not a well-maintained surface so, still, my heart was in my mouth. We got turned in the right direction and set off to HW18 at the end of town. As soon as we were riding properly, all the tension in me just drained away and it felt like I had never been off the bike.

The road climbed upwards and we entered the sunlit red rock scenery that makes us love Utah so much. The breeze was cooling and the riding was fabulous.

The first stop for fuel was after only 40 miles ( best to top up every opportunity ); this was in a tiny place called Enterprise. We topped up and both drank a half litre of water each. There are two things we cannot disguise here – our accents and our registration plate ( that second one has caused many a state trooper to follow us for a time; British and American plates have nothing in common) . As we stood sipping our water, a local man, filling up his massive Tonka toy truck, commented on both and asked where were from. We told him, ‘England’ ‘Whoa-yee-hippidy! ‘ he exclaimed, ‘ imagine that, two people from Engeland, here in our liddell biddy town of  Enterprise’

I experienced a little niggle of worry about getting back on the bike (getting off is easy – you just slide down) but, I did fine and, from then on, I knew all would be grand.

We rode through land that was dusty and dry and with only sage brush growing – not a sign of any water, yet, there were plenty of free-roaming cattle and warning signs that they coul be on the roads; signs warning of deer too but we only saw one as we reached the junction of HW6 ( The Lincoln Highway) as we neared Ely. 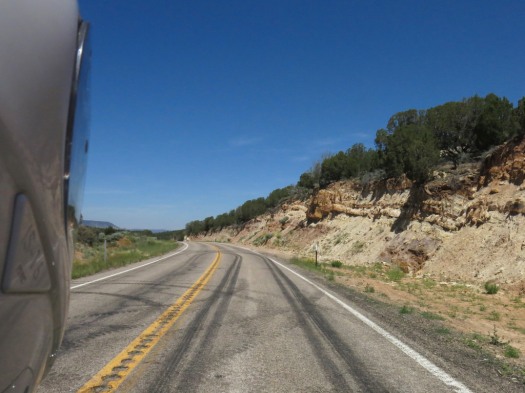 The dusty road to Modena reminded us we had been this way before; in 2011when on our way to HW375 – The Extra Terrestrial Highway. Jan pulled in at the county line so we could take photos of being in Utah and then, a step away, Nevada. 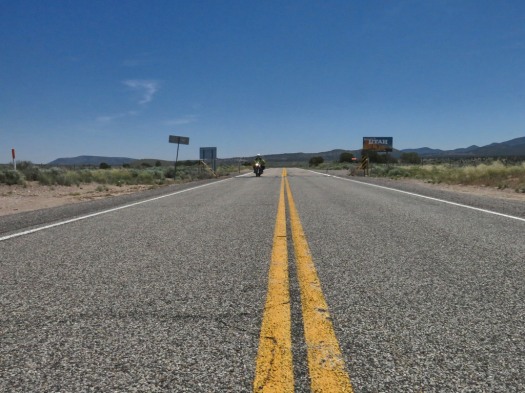 You cannot imagine how hot those riding suits are when you stop and lose the breeze from going fast! The next fuel stop was Panaca and, again, we remembered being here before – but that time, it was pouring with rain so we had sheltered for an hour. Today was lovely though, so we filled up and had more water and some chicken nuggets. 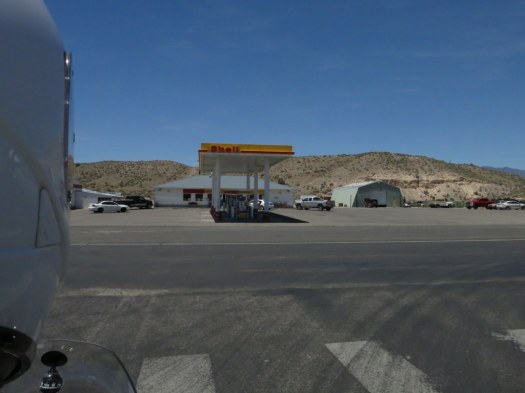 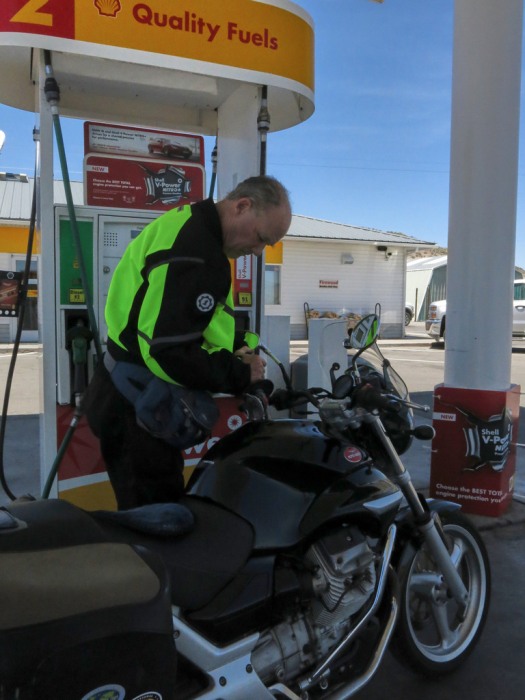 The next part of the ride was about 120 miles with nowhere to top up. The road was mostly straight with a long chain of mountains to our left. HW93 runs through one of the valleys between lots of chains of mountains that go from north to South. All mountains can create katabatic winds; A katabatic wind, from the Greek word katabatikos meaning “to flow downhill”, is the technical name for a drainage wind, a wind that carries air from a higher elevation down a slope under the force of gravity. Katabatic winds can rush down elevated slopes at hurricane speeds, but most are not as intense as that. Well, those mountains were draining their winds alrighty! We were broadsided by them the whole 100 miles of that road! Jan did an admirable job of aiming the bike towards the wind to avoid being shunted off the road, while I just tried to keep a low profile to reduce wind age. It was exhausting and the winds were hot. 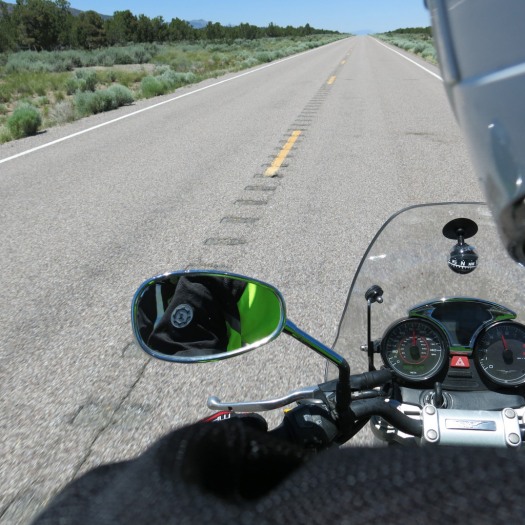 At aound 50 miles, Jan pulled in to the side of the road and we dismounted. His balls were sore! He said he had forgotten how restricted his movements were with me on the back; whilst riding alone, he can stand up, shuffle around and sit more forward or further back to relieve the pressure but, with two of us on the bike, there was no room to dance and so, his balls were sore. He also took the opportunity for a pee and suggested I do the same. I reassured him I didn’t need to; I know he likes to get me in a vulnerable position in that desert scrub then tell me to watch out for rattlers! 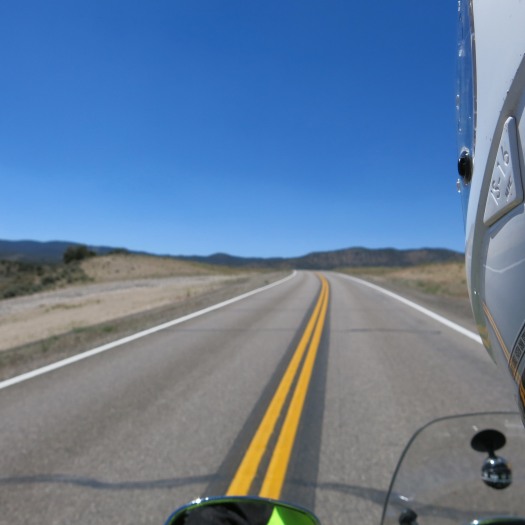 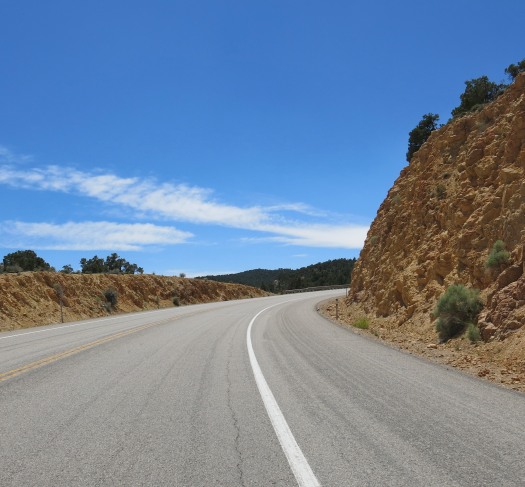 It took about three hours to reach Ely; we had averaged 68 mph. The motel is called The Jailhouse and it is part of a casino. We checked in and were told the room reserved for us was upstairs but there was a smoking room on the ground floor; we didn’t care if the room smelled a bit faggy so we took the ground floor. 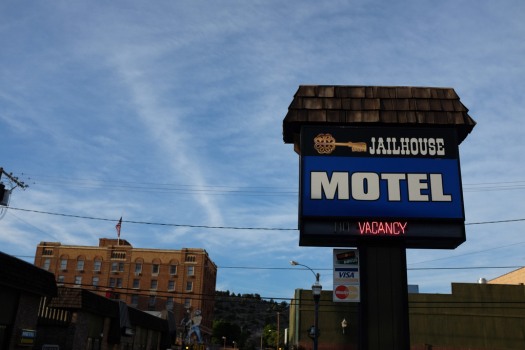 One we had unloaded the bags, I stripped out of my riding gear to find the insides actually dripped water from sweat! Rarely has a shower felt so good. We took a walk around town then went for dinner in the Jailhouse restaurant. We weren’t impressed but were too tired to do other than slog through the meal. the starter (which we shared) was ‘shrimp cocktail’; those ‘shrimp’ were abnormally big and totally lacking in taste. For mains, I had halibut (that poor fish had been cooked to the texture of a dry cardboard) and Jan had salmon that tasted oddly earthy and the crab that was part of the dressing was obviously tinned and tasteless. Not to worry; it was a pleasant end to a good day.

That’s it for now, amigos. Tomorrow, I’ll post some photos of the wonderful time we had at the Nevada Northern Railway today……