Ely is the largest city and county seat of White Pine County, Nevada; it was founded as a stagecoach station along the Pony Express and Central Overland Route. Ely’s mining boom came later than the other towns along US 50, with the discovery of copper in 1906.

U.S. Route 50 is a transcontinental highway, stretching from Sacramento, California, in the west to Ocean City, Maryland, on the east coast. The Nevada portion crosses the centre of the state and was named The Loneliest Road in America by Life magazine in July 1986. The name was intended be a put-down, but Nevada officials seized on it as a marketing slogan. The name originates from large desolate areas traversed by the route, with few or no signs of civilisation. The highway crosses several large desert valleys separated by numerous mountain ranges towering over the valley floors, in what is known as the Great Basin

The route was constructed over a historic corridor first used for the Pony Express and Central Overland Route and later for the Lincoln Highway.

This is our third visit here; originally, we came when doing the, ‘Loneliest Road In America’ challenge for which we received a certificate and badges from the governor of Nevada for having completed the ride.

We returned the second time because we really loved the railway museum and the murals to be seen painted all over town. And, it is for the same reasons we have come back again. 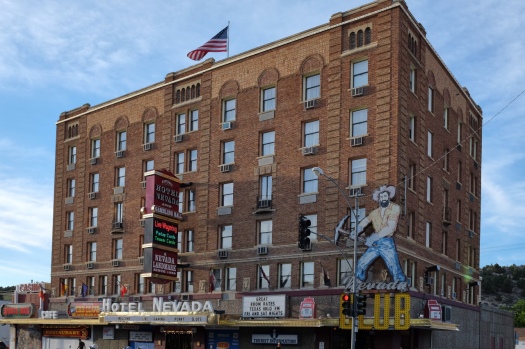 The historic six-story Hotel Nevada is located in downtown Ely. Opened in 1929, it was the tallest building in Nevada well into the 1940s and was the state’s first fire-proof building. It is a popular lodging, dining, gaming and tourist stop.

The Ely Renaissance Society has facilitated more than 20 outdoor murals and sculptures in the downtown area. Artists from all over the world have been commissioned to create images of area history, using different art styles. They also maintain a historical village consisting of a general store and several shotgun houses which display the history of the ethnic groups that came to the area to work for the railroad and the mine. 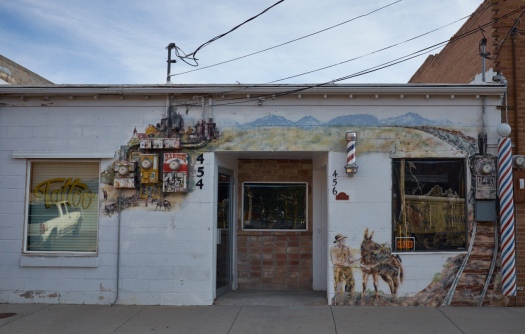 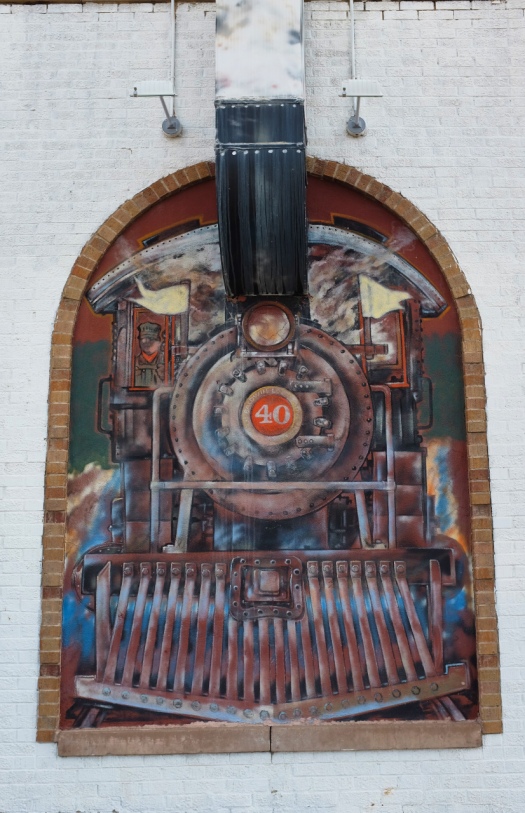 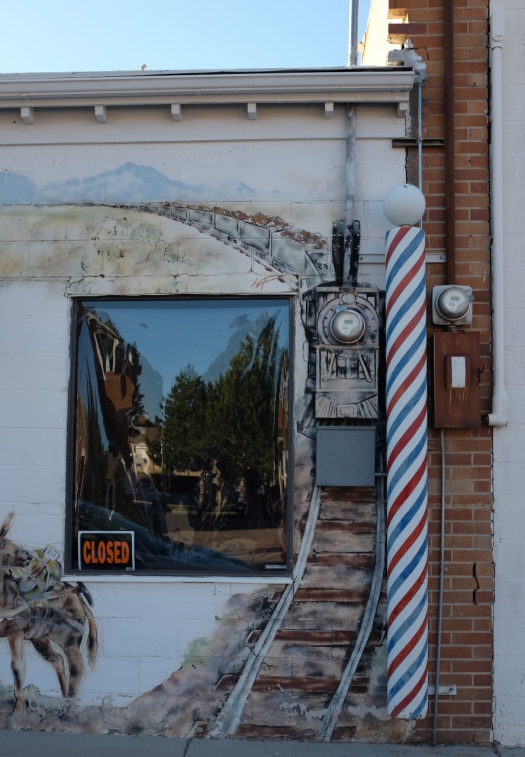 Remember Jan seeing a couple of Basque-type caravans on his ride here? It was in Ely that we first heard of the Basque shepherds coming to Nevada from the Pyrenees area between France and Spain. 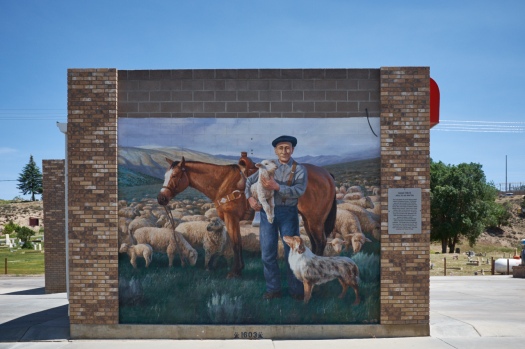 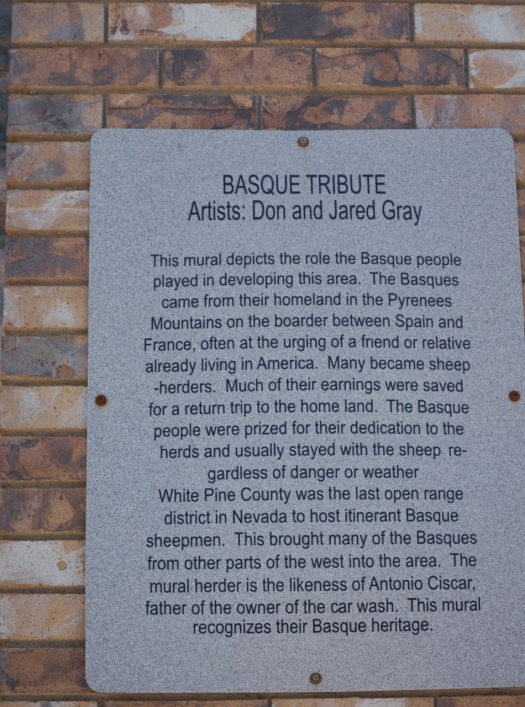 But,the jewel in the crown of this town, for my money is the Northern Nevada Railway Museum.

Though the railroads connecting the First Transcontinental Railroad to the mines in Austin and Eureka have long been removed, the railroad to Ely is preserved as a heritage railway by the Nevada Northern Railway and known as the Ghost Train of Old Ely. It is a fully working museum and even for none-railway buffs (like me) it is a fascinating glimpse into the history of the transport during the era of mining for gold, turquoise, tin and many minerals.

As the Industrial Revolution gained steam, America developed a huge appetite for copper. The metal was a prime component of new electrical devices such as motors, light bulbs, and telephones. Much of the demand was met by mines around Ely. Established in 1906 the Nevada Northern Railroad hauled the ore from isolated mines to the smelter, and refined copper to the rest of the country.

The full service railway complex occupies 56 acres with more than 40 historic buildings, shops, and other structures. You can explore and watch mechanics maintain steam locomotives and various types of railway cars. It’s gritty and dirty, just as a railway yard should be. Walking through the museum lets you experience first-hand the technology necessary to move mountains of copper ore. The Northern Nevada Railway harks back to an era when Americans built things to last. 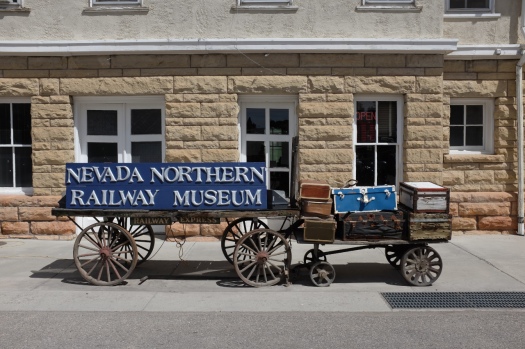 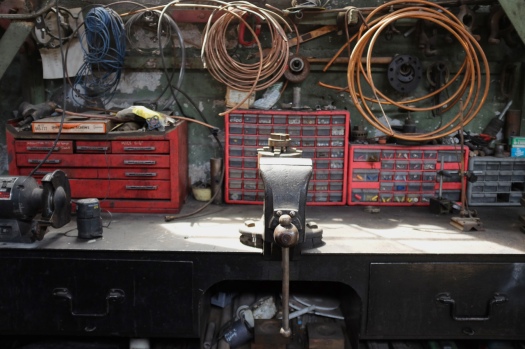 ‘Wooden gears are for use as patterns for casting metal parts. Made oversize to allow for shrinkage, sand is packed around them and then removed before the metal is poured in – almost a lost art.’

Thanks for the info, Bruce. 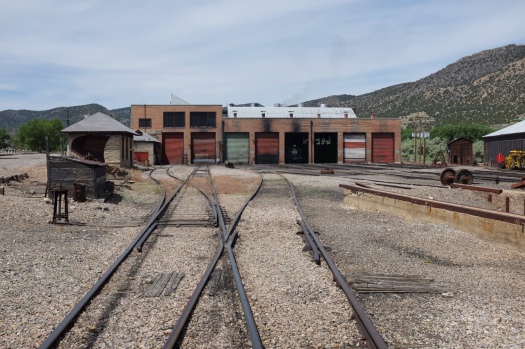 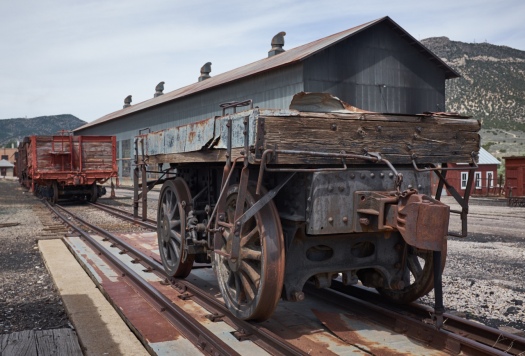 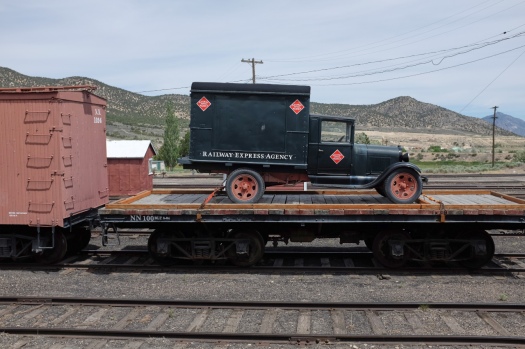 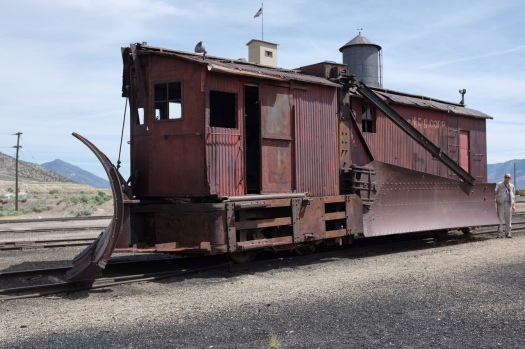 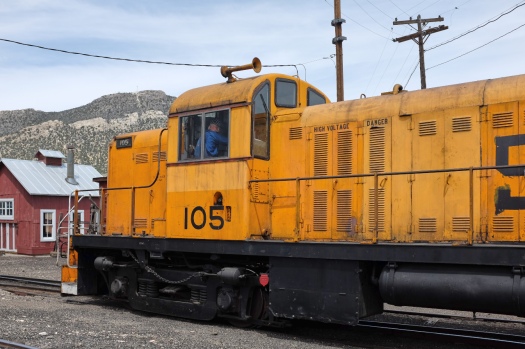 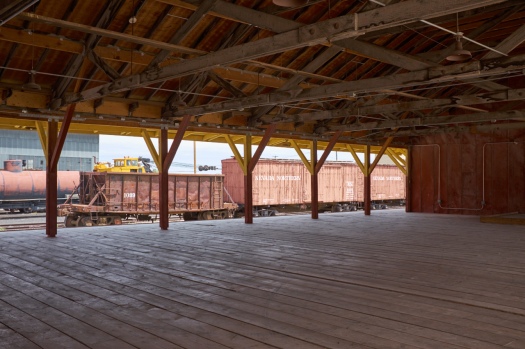 We spent about three hours in the sheds – and even then, Jan had to drag me away; he had bought me a ticket to ride the 1630 train and we needed to go and do some shopping, get back to the motel, eat, shower and return all within two hours. Besides which, it was scorchio around midday.

We rode the train towards the Ruth mine. 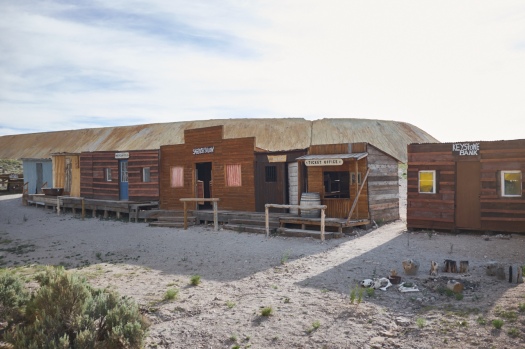 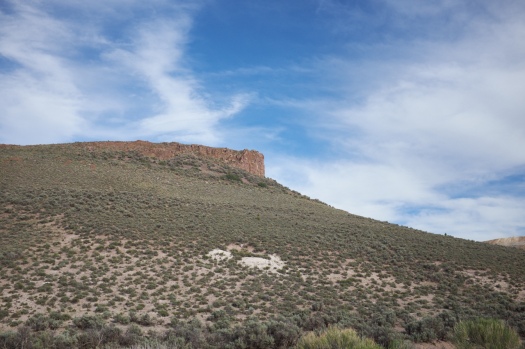 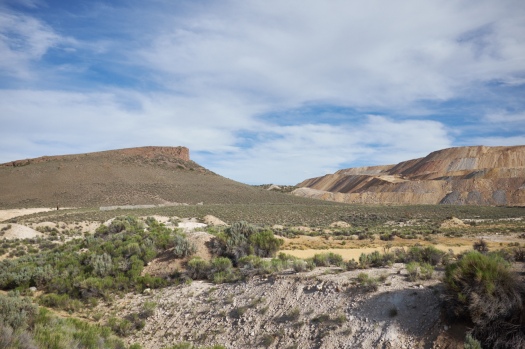 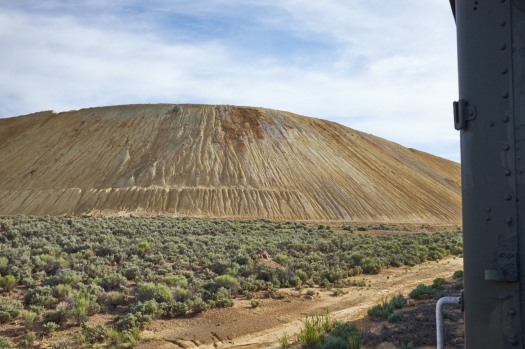 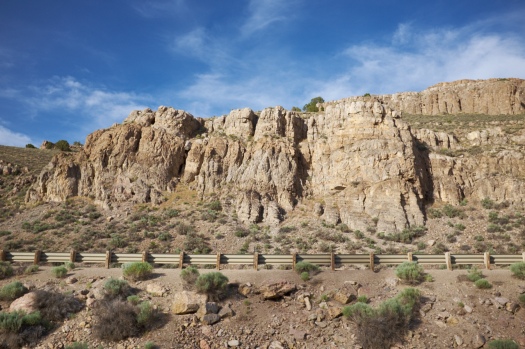 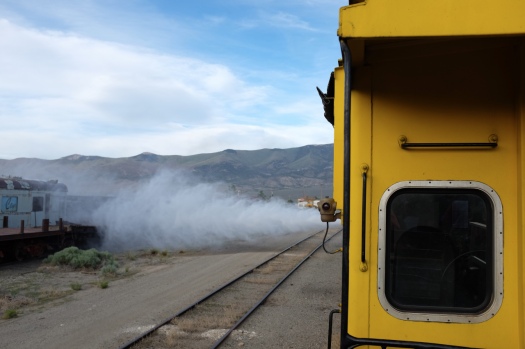 Brothels are legal here in Nevada and, once the mid-afternoon heat is dissipated, I’m off for a walk to see if the girls (who waved at us when the train passed, yesterday) will let me take some photos; I’ll leave Jan here in the motel!

Just a few more photos from around the town. 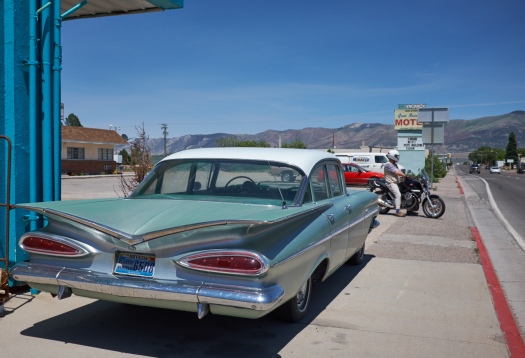 The Shoshone woman in the sculpture, Tsaam Pll Wai Hyunna Yewekante (“Living Well Because of Mother”), tends a baby in a traditional cradleboard while holding a basket and harvesting nuts with a beating pole. A living pinyon pine serves as a direct subject of the harvester figure, created in 2002 by New Mexico artist Joe Pachak.

“Indians have been living in this area for the past 12,000 years,” says Pachak. “Shoshonean groups came into  White Pine County about 800 years ago from the area that is now southern California. The Shoshone were hunting and gathering people. As the white people migrated into this area, there was no longer enough game to support them, and many of the forests that had provided pine nuts were cut. The once self-sufficient people were forced to work at the newly established mines, ranches and farms. The sculpture is a tribute to a way of life.” A local Shoshone woman modeled for the sculpture, and other local Indians assisted Pachak during the sculpting process. 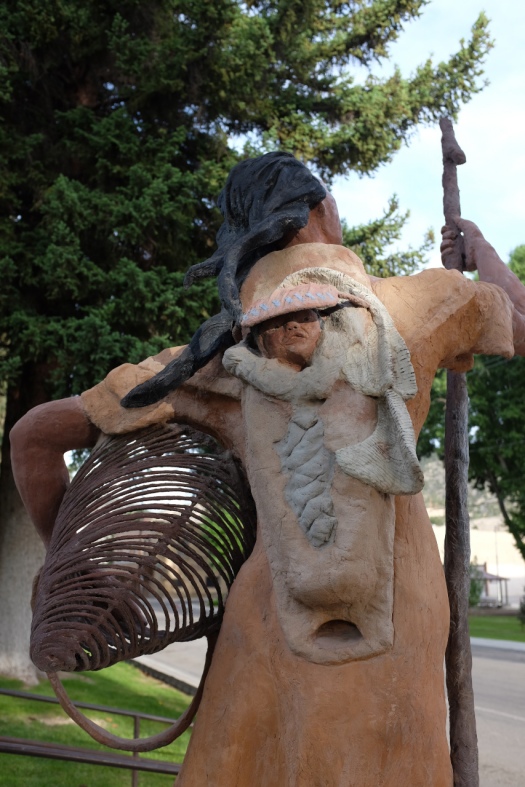 The sculpture below is a tribute to the railway. 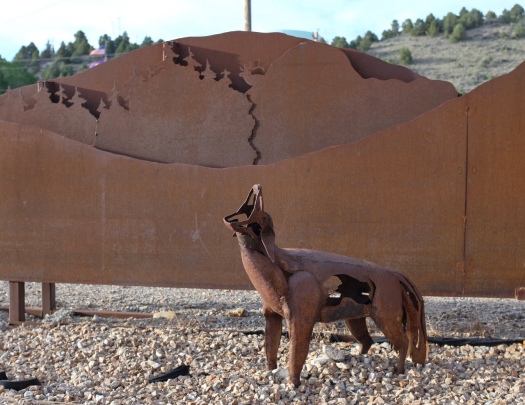 Finally, here is an example of how some American bikers travel (this first one really appeals to me! 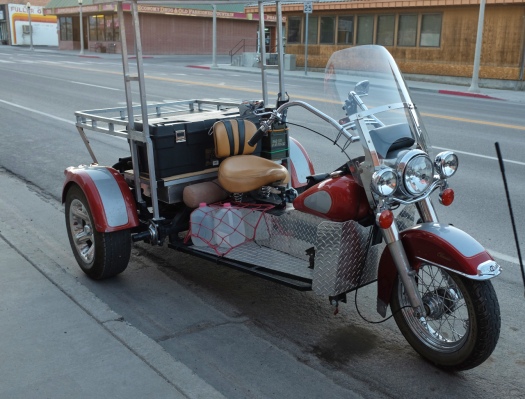 And here’s how us simple Europeans travel….

That is it for now; if I get any good photos from the brothel and if I have time, I’ll post them later. Otherwise we may not be online for the next couple of days as we are heading to California and will be camping in Lee Vinings – close to Mono Lake (an incredibly beautiful place) and Yosemite National Park. From there, we will be heading south to Barstow and following the western end of R66 we haven’t travelled.