We left Ely around 10am after filling up locally. The next fuel stop was in Tonopah, 168  desert miles away.

We stopped when Jan got another ‘ ball-ache’; this was after about 70 miles. It is nice to get off the bike for a stretch anyhow.

I forgot to save some photos of that part of the trip – after 4 days (two without Internet or charging abilities) I had over 1,000 photos to sort through and I missed those; I’ll add them when I can.

Once we entered California, the terrain changed from straight, barren desert roads to wonderful curvy, undulating, stomach-churning roads with lots of low-level plants that eventually gave way to the aromatic aroma of the pine trees of the Inyo Forrest and the gorgeous verges of purple alpine plants.

Those ‘undulating’ roads I mentioned – I must add a video (the Internet here is very weak and wouldn’t run to uploading video) was where I first decided I need a third hand. My left hand was working the remote control for the GoPro camera attached to the crash bar of the bike, my right hand was working the camera and that is when I realised I could do with a third hand – to push my heart – which kept rising up into my mouth – back down to where it belongs! It is very surprising to be looking at your gadgets, to glance up and suddenly feel you are on a switch back ride; yes, those undulations were pretty exciting!

We rode for about six hours and pulled up in a campsite we have used twice before, Mono View in Lee Vinings; this site is close to the eastern entrance to Yosemite National Park. It’s  a nice campsite with soft grass for the tent, tables, fire pits, clean showers and laundry facilities.

We booked two nights and rode to our allocated pitch, T6. It is amazing how the bike carries all our gear. Once we start spreading the gear out so we can pitch the tent, it is evident just how much we have to carry.

Tent up, we strolled into town for a meal and to buy some beer and a bottle of wine for later.

Back at the tent, we found we had some new neighbours; Rob Steady was a man of around our age who was walking the Pacific Rim from Mexico to Canada. He had set off from Mexico in April and hopes to cross into Canada in September. He has a tiny tent which weighs less than one pound and, fully loaded, including food for 2 or 3 days, his backpack weighs around 30lbs.

Our other neighbour was a couple from Holland. They had had their bikes sent over in a container and are here for six months of touring. Their bikes are KTMs. These are high, rugged bikes. The woman, Aria, found she had difficulty getting on the bike because of the height, and she also found it heavy to handle; so they designed and then had a side cart custom-built. It was a rugged, strong and incredibly useful design; it acted as a step up, as a balance and it carried everything from the tent to belongings and spare wheel, tools and two large Jerry cans of fuel.

The cameras needed charging and the only place with sockets is the laundry room so that is where we spent the evening, charging, sipping and reading Trivial Pursuits cards while our electronics were recharged. 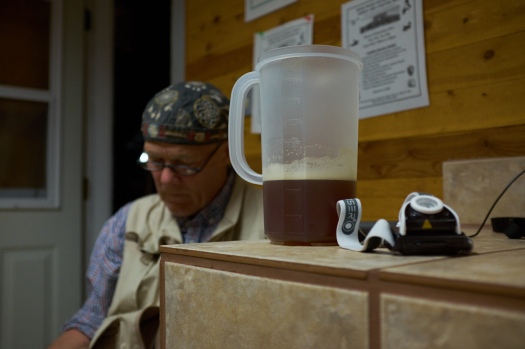 Once all the little lamps were green or off, we returned to the tent – good job we took a torch, it was dark as dark can be. I tipped my wine into the grass, said goodnight and climbed into the tent; tired enough to fall asleep quickly but, within an hour and for the whole of the night, tortured by cramp in both legs. Morning couldn’t arrive soon enough. At 0530, I crawled out of the tent with my camera and went for a walk to get my circulation going again; it was a lovely sunrise.

I returned to the tent with a coffee for Jan and a tea for me, bought at the gas station. Jan crawled out for his coffee and, by 0730, we were ready to head over the Tioga Pass to Yosemite National Park.

Jan didn’t look too well though; he looked tired and, at this altitude of around 7,000 feet, we both felt a little breathless.

However, we set off. It is a 12 mile, steep ride to the entrance to the park. We had gone about 6 miles when Jan pulled in to a view-point pull-out. He sat, head down on the bike, looking terrible. I told him to get off the bike, stand upright, expand his ribs and breathe deeply. We decided to head back down the mountain.  Around three miles down, he pulled in again but just to turn around, saying, ‘I’m fine now’. Personally, I didn’t feel too happy about that but, hey, I’m just on the back of the bike. We passed our first turn-around point and continued up, passing the 9,000 feet point.

Then Jan pulled in again. ‘I’m sorry, I feel really bad, sorry I can’t make it’. I felt relieved and tried to reassure him it didn’t matter. Once he felt a little better, we climbed back on the bike and headed back down the mountain again. This time, as we reached the bottom, I insisted he pulled into the nearest cafe and have something to eat. We have been having breakfast but little else as it is so hot we both have no appetite during the day and on this day, we had just nibbled some trail mix for breakfast.

We had a decent breakfast then rode back to the tent to lie down. It was still only 9am.

By 10am, it was too stifling inside the tent so we went back to the laundry room to sit in the shade and empty the SD cards from the cameras. Then Jan announced, ‘ come on, let’s go back up the mountain’. 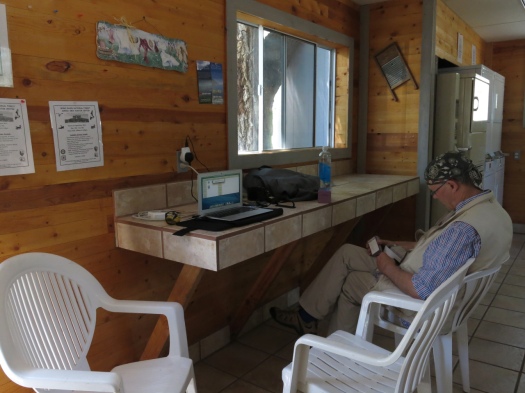 This time, all went well. We decided not to wear our heavy motorcycle suits, just our helmets and tee shirts and light pants. Mistake having bare arms! At over 10,000 feet, it is a comfortable temperature in this climate. But, of course, the air is thinner and the rays are powerful. More on that later!

We rode 48 miles into Yosemite and there were still 50 miles before we would get to El Capitan; with our late, 1pm start, we wouldn’t make it there and then back to the campsite before dark and I really wanted to return to Mono Lake, so we decided to turn around; the deciding factor, really, was coming to the first set of three sections of road works and being in a traffic queue for over ten minutes. It was at this time we realised our arms were sore; sunburn! Damn, we forgot to use sun block. Ouch.

It was on our return ride that Jan saw a sign for May Lake. He took the side road but soon realised it would not be good for our bike and this was confirmed when a car going the opposite way stopped to warn us it was a very rough and bumpy road ahead. I climbed off to make it easier for Jan to turn around. There was a truck and a guy parked at this spot; they were from AT & T, the telephone company.

Jan began the turn but lost balance on the rough gravel and over went he and the bike. I dashed to help; jan switched the engine off, once he got his right leg out from under the bike, then we both heaved the bike three or four times before getting the bike upright.

Young and fit Mr AT&T didn’t attempt to give us oldies a helping hand; thanks for nothing, AT&T – we’re not too keen on your phone service either!

For now, though, some photos of this beautiful place.