On our return from Bryce Canyon, we opened the motel door – to a pleasant surprise. The room had been cleaned and made up. The bed had a pristine white cover on and the towels were fluffy, soft and huge. The room smelled fresh too. Everything worked – a little fridge an antiquated microwave and the TV, while not being flat screen and cable – did, at least get the weather channel.

We changed and headed out to find a meal and a drink – it was now gone 7pm. Walking through town was interesting but did cause us (me) to dawdle a bit. 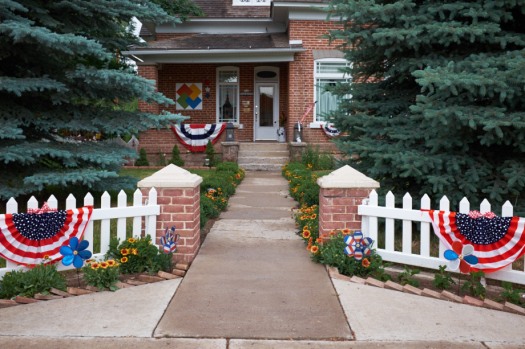 And there were lots of things to photograph downtown 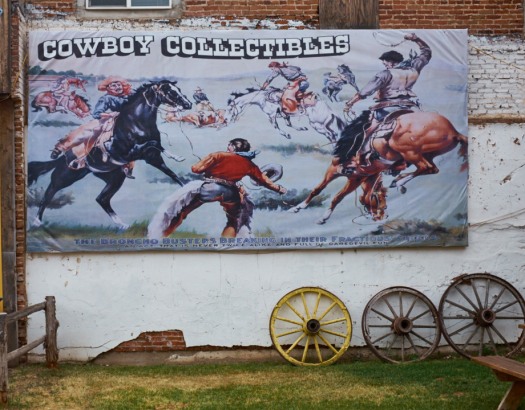 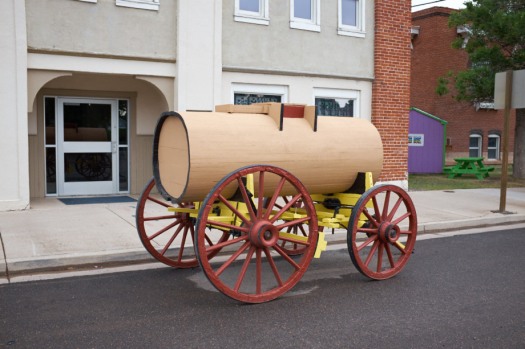 We walked to the end of Main Street and turned the corner. Just over the road was a little memorial park.

Settling Panguitch
It was March 1864 when four Mormon families braved the rugged terrain of Utah’s untamed south central canyon lands and settled the small town of Panguitch, Utah. Facing starvation, harsh winters, and tension with the local Native tribes, these pioneers risked survival to establish a community where their beliefs and lifestyle could thrive.

Due to the infamous Black Hawk War raging between the Mormons and the Natives, the first settlement in Panguitch was hesitantly abandoned in 1866. Yet determined pioneers returned in 1871 to continue their predecessors work.

With snow too deep for wagons, the volunteers were forced to walk most of the trek. To avoid falling through the snow’s crust, the men used quilts to cover the surface of the snow, creating a cushion to safely walk across. Reaching the end of one quilt, they would place another one down before retrieving the first. This technique led the men safely to the neighboring settlement, and back home again, saving the inhabitants from starvation and blazing into Utah’s history as the famous “quilt walkers.” To honor the innovation of these brave men, the town of Panguitch hosts an annual “Quilt Walk,” reenacting the perilous journey and highlighting local quilters with their embroidered works of art. 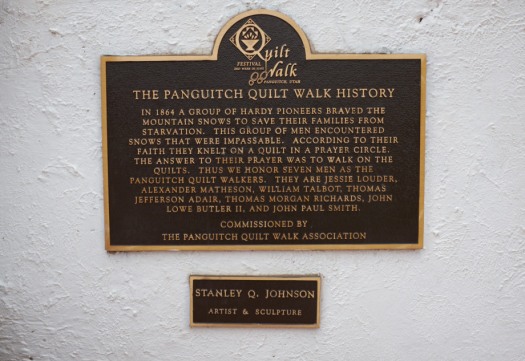 The people of Panguitch hold an annual celebration of this quilt walk event and a memorial now stands in the center of town to honor the efforts of these original settlers.

It was whilst reading the stories on the red stone benches that we met Art (Arthur) Cooper an octogenarian born and raised in Panguitch. Art told us he was the youngest person (at age 25) to be elected to the Legislature (a legislator, or lawmaker is a person who writes and passes laws) and he was the oldest Mayor of the town too – and even now, he is very active in the town council – including the town’s website http://panguitch.com/why-panguitch-by-art-cooper/ 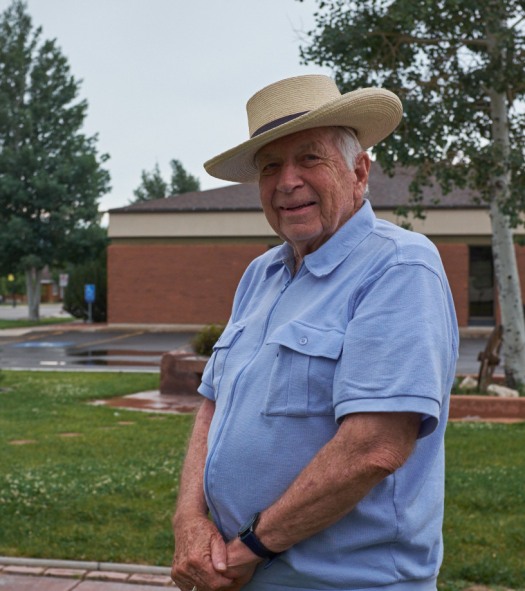 We asked Art where we might get a beer and he told us, ‘In all of my 80+ years on this earth, I only ever sipped a quarter teaspoon of coffee and never touched a drop of alcohol; Once that alcohol-free beer came out, I did enjoy a glass or two with a pizza or burger’ We agreed there was no point asking him then. He did tell us who did a good BBQ, (the Smokehouse) and who did a great burger (Henrie’s Drive-In’) and breakfast was good at the ‘Flying M’. And, he added, there’s a Likker Store just around the corner.

It would have been nice to chat for longer but, in small towns, eateries close pretty early and we were starving. We waved goodbye and headed back to Main Street; drat, the liquor store had just closed. We crossed to The Smokehouse. Do you serve beer? ‘No sir’, nobody in town does.

Aha though – when we had our burger this morning, we noticed the Flying M had a beer list and a wine list too. So we rushed to the opposite end of town – about half a mile. We made it just before closing and ordered spaghetti with meat sauce and a beer and a carafe of wine.

A good ending to a good day. And tomorrow was another early start.

It was a 69.9 mile ride on I-15 interstate before turning off onto lonely country roads again for the final 50-odd miles to Torrey. These were curving and undulating roads with little traffic. We did have a prairie dog run right in front of the bike – luckily, we missed him; silly dawg.

With around 30 miles to go, we pulled into the gas station of a very small town called Koosharem.

The name of the town Koosharem originates from the native Americans indigenous to the area, the Piute Indians and their term for the valley named for the deep red clover that grows in the lush meadows of the Koosharem Valley. The population was 276 at the 2,000 census.

The town’s only store is the historic Grass Valley Mercantile (it is the post office too); and what find that was; it was like being whisked back to the last century. Once we had filled up, we spent ages looking around and chatting to the owners; the store has been in the same family for six generations.

You could buy everything you needed in this store and it sat on the original shelves. 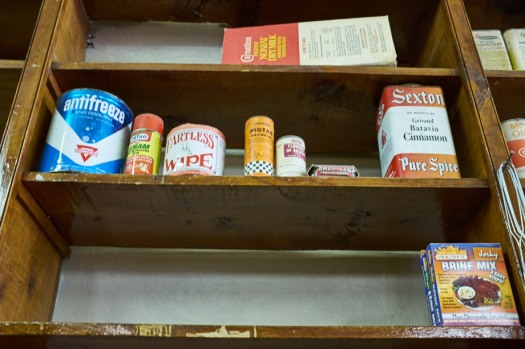 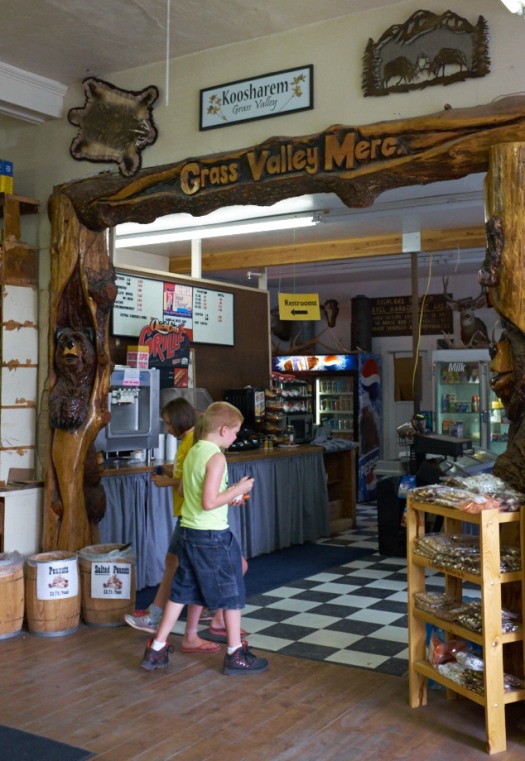 But the greatest treasure was these two gents; the man with the mutton-chops sideburns is Harold (I think that was his name) and he is of Danish ancestry and the other fella (didn’t get his first name) is of Norwegian ancestry and is very proud of his name of Sørensen. On hearing Jan was Danish, he asked if he might know his Sørensen relatives?

I asked the boss ‘What animal is that fox-looking one?’ I expected to hear it was something unique to the southwestern USA but Harold, replied, ‘It’s a fox”

I was intrigued by the mounted turkey too (yes, that is the ceiling of the store)

I had to take a photo of the three Scandinavians together

It didn’t take us long from Koosharma to Torrey and it was nice to pull into our motel. Exceptionally clean, but the cheapskates didn’t provide a coffee machine, let alone a fridge or microwave! And the towels were tiny. Oh well, a three-day rest and tomorrow is Independence Day. 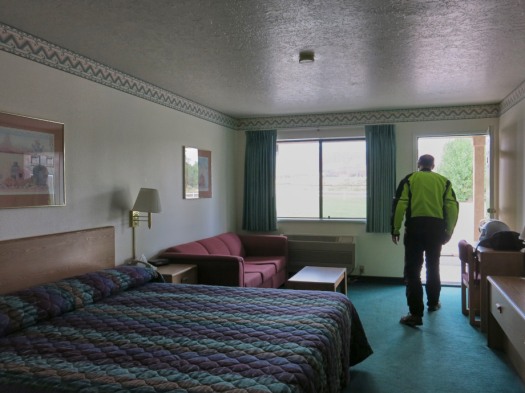 But we do have a great view! 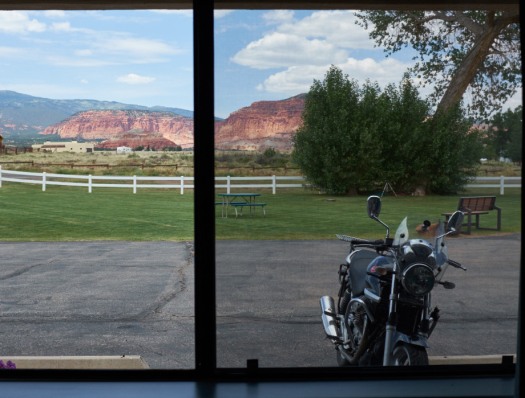 Tomorrow (or asap) the fabulous Saddlery Cowboy Bar just over the road – and then July 4th; Independence Day. Then today’s adventure, Capitol Reef National Park but, for now, I’m off outside to keep Jan company and sip a little wine.