We were packed and on the road from Torrey by 8am; the first part of the route would be a retracing of our ride up here from Panguitch but, after 120 miles we would turn right instead of left.

It wasn’t too long before we came to Koosharem  – the tiny town seemingly trapped in a delightful time-warp of an earlier time. We decided to stop for breakfast and pulled in to a sweet little all-American diner where the waitress welcomed us as though we were old friends, and, coffee pot in hand, seated us and gave us the menu. 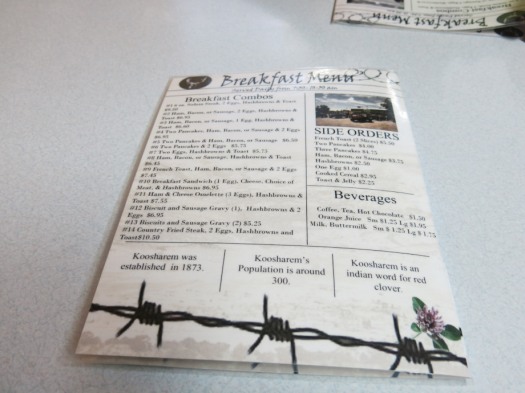 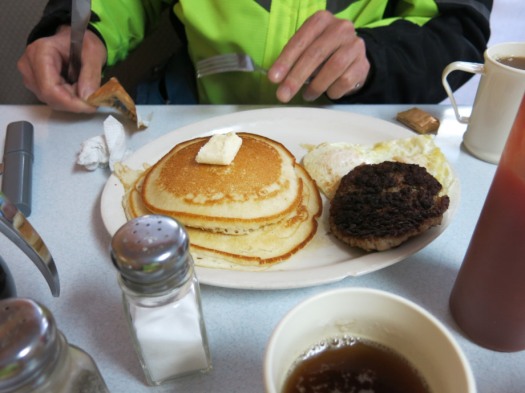 Breakfast was soon brought out and thoroughly enjoyed.

Just the other side of town, we stopped to take photos of an old gas station. On our way up to Torrey, Jan had asked if I managed to get a shot of this place (I hadn’t as I was looking elsewhere at the time). Once we reached the station, I understood why Jan was so keen; it was called, ‘Ole’s Place’ and Ole is the name of Jan’s dad’s brother (Danish name). We knew his dad and uncle would be tickled to have a photo of this remote gas station.

The rest of the ride was fairly interesting – lots of twistys and sharp bends with precipitous drop-offs on one side or the other and my heart did rise to the back of my throat a few times. We were also playing hide and seek with some heavy rain clouds. It would look as though we were about to head into them band get soaked but then the road would bend and we would be heading away from them or they would be to the right or the left of us. 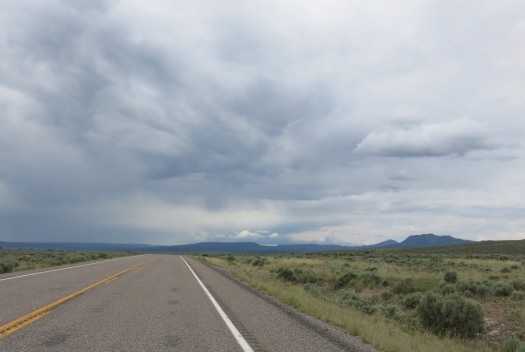 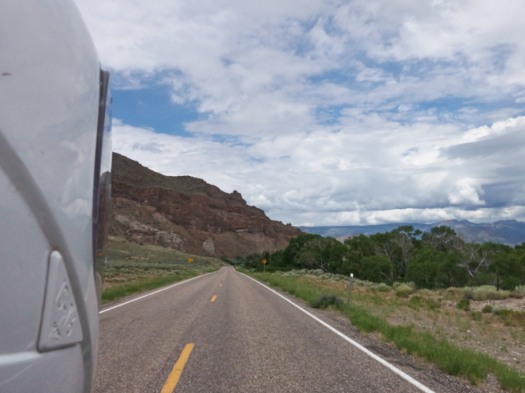 There was a canyon named after my hometown Kingston; we had to stop there for a photo and a stretch.

It was shortly after that, that Jan slowed the bike, pulled to the side of the road and asked if I saw that turtle? Nope. Jan did a u-turn and headed back a few metres before stopping on the opposite side of the road.

I jumped off, checked for traffic around the bend and ran across the road. Approaching carefully, I could see the ‘turtle’ – we have seen plenty of snapping turtles on the country roads of Missouri but never out west. I crept up on it – those turtles really so snap – and as I got close, burst out laughing; the ‘turtle’ was nothing more than a camouflage baseball cap. 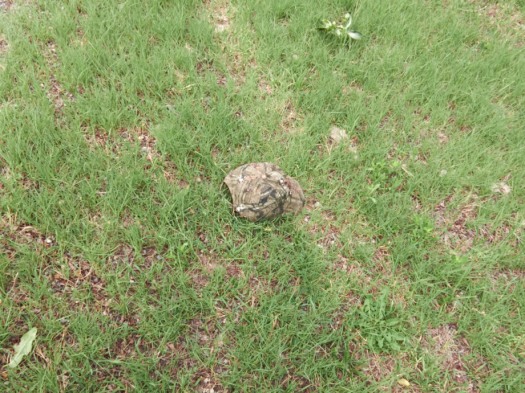 It was around there, again on a sharp bend, that a small deer ran right in front of us. We had seen about 7 large and very dead deer so far and we were to see quite a few more before reaching Cedar City. Luckily, this small one just made it across.

A couple of places had flood warnings and, approaching slowly, we were relieved to see the actual water leve l had receded and there was just mud to negotiate 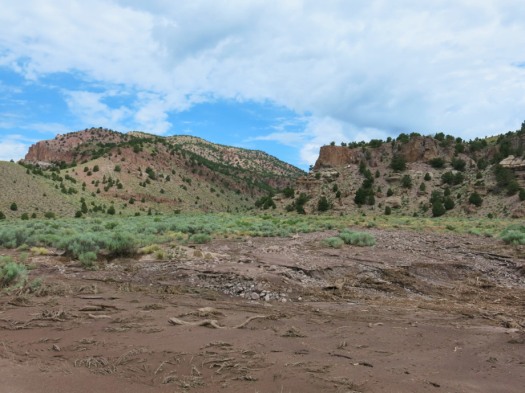 The motel was booked for three nights and we were looking forward to seeing this nice town again. Exit 62 came and we turned off. I had a sketched plan of the roads to take to the motel and we knew it was very close to I-15. Puzzled, we slowed down to check the roads and the sketch. Surely this couldn’t be where the motel was? We were in a barren-looking area with nothing but a truck stop and a school bus depot; the roads were heavily filled in and the pavement overgrown with desert grasses. And the road was confusing. Jan rode in a big circle and then spotted, high in the air, ‘Travelodge Motel’  It took a little road weaving to find the actual motel and my heart sunk.

It was a dump. We climbed off and went into the office; my heart sunk further when, at the ping of his desk bell, a smooth-skinned man of about 40 came from nowhere. He wore white calf-length socks, no shoes and he had the most rabbity teeth I have ever seen; I think his teeth were nearly horizontal. But it wasn’t that which immediately creeped me out; it was his penetrating shark-eyed stare magnified by the two – yes two – pairs of coke-bottle spectacles perched halfway down his nose. I wanted to run but, Jan, ever the immune to subtleties, handed over his card to pay for the three nights. I went to open up the room whilst Jan rode the bike to the door.

The room seemed ok at first sight but, on closer inspection, it was pretty dirty. The fridge was grimy, the TV dusty, the carpet stained and, on checking the sheets, I found some pubic hairs and a brown stain by the pillows of one of the queen beds. Double Yuk! Dismayed a face as only I can make, we put the bags down and went to check out the truck stop for some bottled water. They sold water, sodas and basic beer. If you were hungry, you could risk a hot dog. We bought drinks and returned to the motel room. I checked online and found there was a liquor store on the other side of town. We wanted to check the town out anyhow, so got out of our armoured suits (it was still around 100F) put cooler clothing and helmets on and rode into town. Five miles away. Five, desolate miles away. We parked the bike in the nice old downtown area but most shops were closing as it was now almost 6pm. I asked a bookshop owner where the liquor store was  (I really needed a vino to be able to sleep in that room). ‘ Oh, about 3 miles outa town, near Wal-Mart’.  Sheesh! Utah really doesn’t make it easy to have a glass of wine! Back on the bike we headed out-of-town; in the rush hour traffic. We came to a junction, the like of which we have never come across; it did a sort of figure of 8 that took traffic flow to the wrong side of the road. Jan got totally confused and we lost our way. Long/short and a few U-turns and we finally found the State likker store.  In the Utah version of outcast-city. But, I t was a welcome sight and the choice of wine admirable. I bought a 1 1/2 L bottle of Cabernet, Jan bought an India Pale Ale of a better caliber than the Bud from the truck stop.

Back at Grimy Manor, after quickly snapping the sunset over the car park, 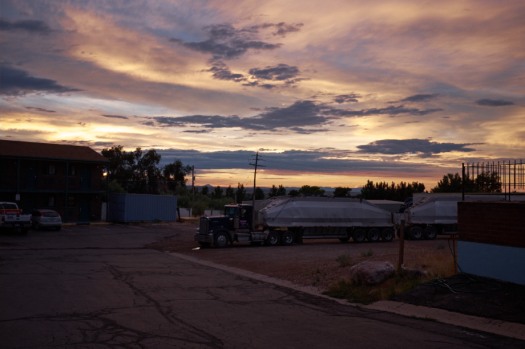 I got started on the blog – the Capitol Reef post, sipping a glass of wine and Jan relaxed with a beer. Before we knew it, it was almost 1am so we cleaned teeth and hit the sack. 0200 and I got up to use the loo. Jan got up a few minutes later and paid a visit; he was fine then. He climbed back into bed and, within seconds said, OMG, Christine, the whole room is spinning (he had only had one beer, so I knew it wasn’t that). He slid down and out of the bed, onto the floor. Then he began to retch violently. I ran for the waste bin whilst Jan tried to crawl to the bathroom. There he lay on the cold tile floor, sweat pouring off his convulsing body and heaving violently. I took his pulse; feeble. I asked his date of birth; he had to think. 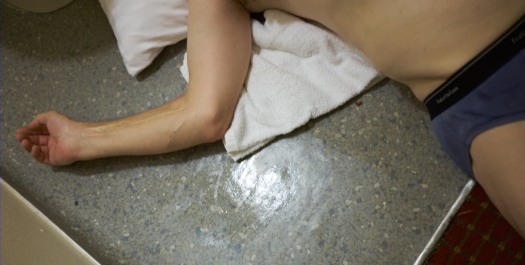 As a trained nurse, I don’t panic or over-react but I did think, ‘Do I ring 911? How does that work in the USA?’ We have medical insurance but I didn’t know if we had to pay upfront before he would be treated.

But I had to do something; and quick.

3 Replies to “Back To The City – Torrey to Cedar City Utah.”