After an eleven hour flight, Jan arrived in Las Vegas early evening. It was too late for the Shuttle to take him to Cedar City, where the bike was stored. I had booked him into a hotel close to where the shuttle would pick him up at 0600 the next morning.

Bag offloaded in the room, he decided to take walk to try and look at the famous strip of casinos. It wasn’t to be a success due to roadworks snd detours. He kept crossing over the busy interstate, would make a little progress then have to cross another bridge; hence the few photos.

In the end, he found somewhere to have a meal and a beer before heading back to the hotel and an early night, ready for. 0400 alarm call, next morning. Sleeping was not a problem because his body clock was eight hours ahead of the time in Nevada – however, it was still daylight.

The hotel-to-airport shuttle didn’t start until 7am so Jan had pre-booked a taxi to the St George shuttle pick-up at the airport and all went well.

Once he arrived in Cear City, he checked into the same motel we had stayed in at the end of our last trip. He had to pay an extra $15 to check in early, dropped of the bag and then went for breakfast. Here, he got chatting to a bunch of friendly guys and one, kindly offered to take him to the storage units and he was kind enough to wait until he  saw that the bike would start.

Below, the guys who helped us get the bike to the storage unit, last year. One of them rode the bike, the other brought Jan, me and the bags in the truck. 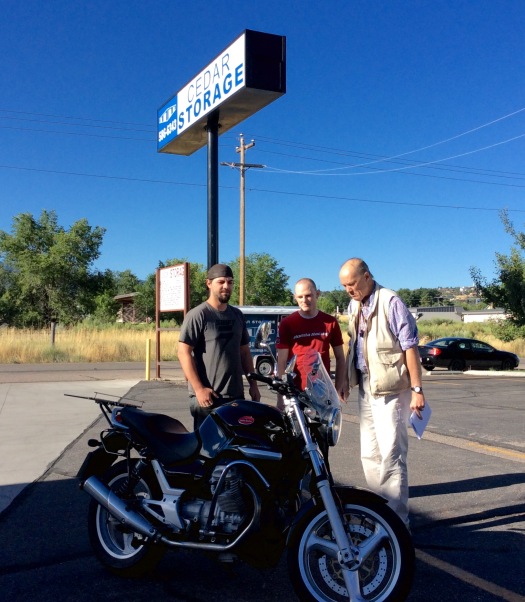 I wish I’d checked my iPad for photos a few days back; due to the disorganised end to last year’s trip, we wouldn’t remember if we had disconnected the battery. So we had come up with plans of how to try and borrow a battery charger or, if necessary, where we could buy a new battery. Neither option that simple. In addition we couldn’t remember where the blue bag that carries all our stuff in was; Jan was convinced we had brought it back and it was in my bungalow somewhere. I searched every nook and cranny; no luck. No, because it was back in Utah!  Had I checked my photos, all would have been clear. In fact, I can’t remember Jan actually being well enough to deal with sorting the battery out but, obviously, he managed it.

our memories are definitely not what they used to be. Jan’s Skype message (he always types in capitals):

‘RIGHT, WELL , PROBABLY DUE TO BEING SICK, I’VE SOMEHOW LOST THE KEYRING THAT WAS ALWAYS WITH THE FRONT WHEEL LOCK. IT HAD THE FRONT WHEEL KEY AND THE STORAGE UNIT KEY. THANK GOD YOU HAD THE SPARES ON YOUR KEY STRING’

Jan removed to polythene cover, reconnected the battery, because, yes, it had been disconnected. He inserted the key in the ignition, took a deep breat and turned the key. A click. A second turn ankd WHOOMPH  up she started! What a bike; 14 months of neglect and she started on the second turn.

I travel home tomorrow (Tuesday 6th September) to sort my own packing out and I return to Manchester on Saturday, 11th for the flight to Las Vegas on the 13th.

I will do my best to continue to catch up in the next couple of days. Writing a blog is so much easier done at the time and in the place.