We are having a rest and laundry day here in 29 Palms, California. I’m trying to catch up with the blog but the WiFi connection keeps dropping so this is all rushed. Apologies for typos etc.

Morning, breakfast and a quick look at the artwork in this delightful town.

Then it was back to pack and get on the road again. We had a long ride ahead of us to see a dear friend, Homer who lives in Ohio so we haven’t seen him since storing the bike out west. Fortunately, he was out here visiting family in the Phoenix area.

We couldn’t find his road so phoned him. He gave us directions and said he would wait at the top of his road in his 4-wheel and guide us to the house. Most of the driveways here are dirt and I dread riding on dirt or gravel. Ure enough, he was there to guide us in.

How wonderful to see him and his wife, Bonnie, after 5 years. And to meet Homer’s sister, Crystal and her husband, Kim who had generously said we could stay the night in their separate room, La Casita.

I wanted a photo of me between two of those big western cacti I’d loved in cowboy movies as a child. So Homer obliged 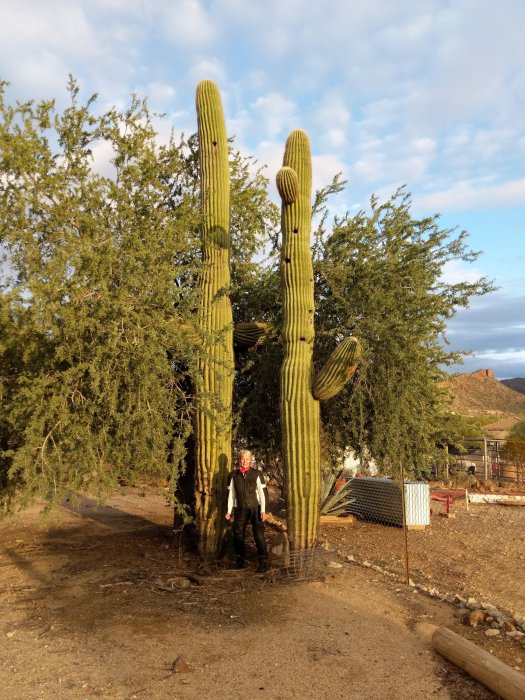 But it wasn’t until after he took the photo he said, “‘Just a word of warning; when you step between those cactus, watch for rattlesnakes. Oh and don’t leave your shoes on the floor in your room and make sure to shake them out before putting them on. There are four things of concern here; rattlesnakes, tarantula, scorpions and Gila monsters scorpions and Gila monsters”

We were treated to a great southwestern dinner of (expertly) barbecued brisket and all the trimmings before watching the glorious sunset and an early night in bed.

This was, sadly, a flying visit and another 300 mile+ ride to California to visit Joshua Tree National Park.

Once out of Phoenix and in I-10 West, it was mostly desert. 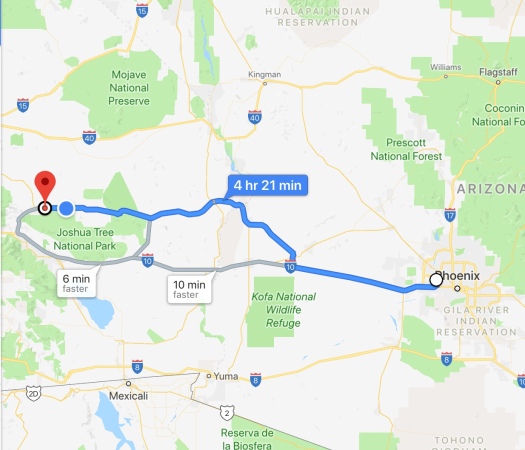 It was great to see these old-timers though! 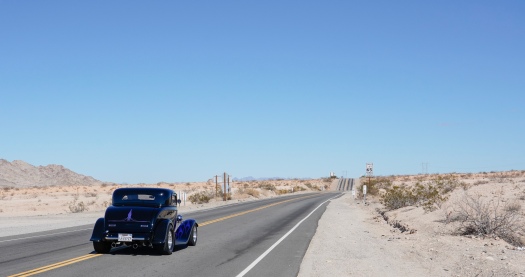 Around halfway, both bursting to pee, Jan pulled to the side of the road. We hadn’t seen another vehicle in the last 50 miles but, of course, the road turned into the M25!

I kept waiting and dancing around (it’s so easy for men) but in the end had to risk moving further in to the desert and just swivel my head looking for rattlesnakes and scorpions and hurry the hell up!

We arrived in Joshua Tree just as the sun started to go down – days are so much shorter at this time of year. Riding in, my heart sunk. Everywhere was coated in white sand and it was piled up in places. My nerves were in shreds on some of the roads.

We hadn’t rented a ‘duplex’ before and weren’t sure what to expect but it was lovely. 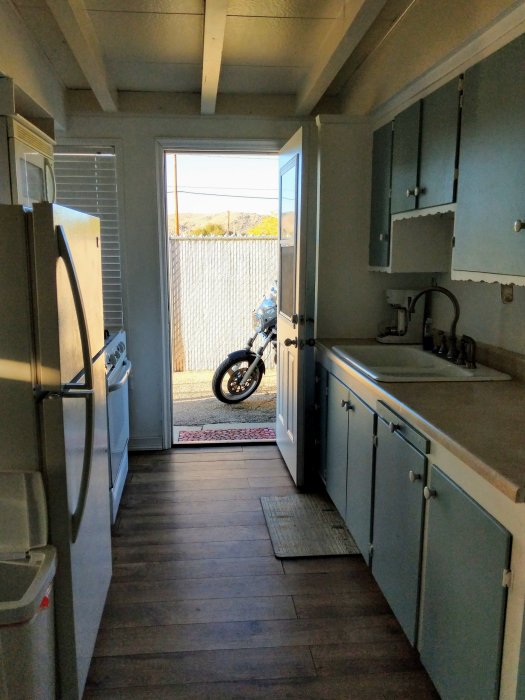 We spent the whole of the following day in the National Park so there are lots of photos to sort out but, that will be further down the road. Tomorrow, Saturday, we leave California to ride through the Mojave Desert , back through the Valley of Fire and back to Mesquite.