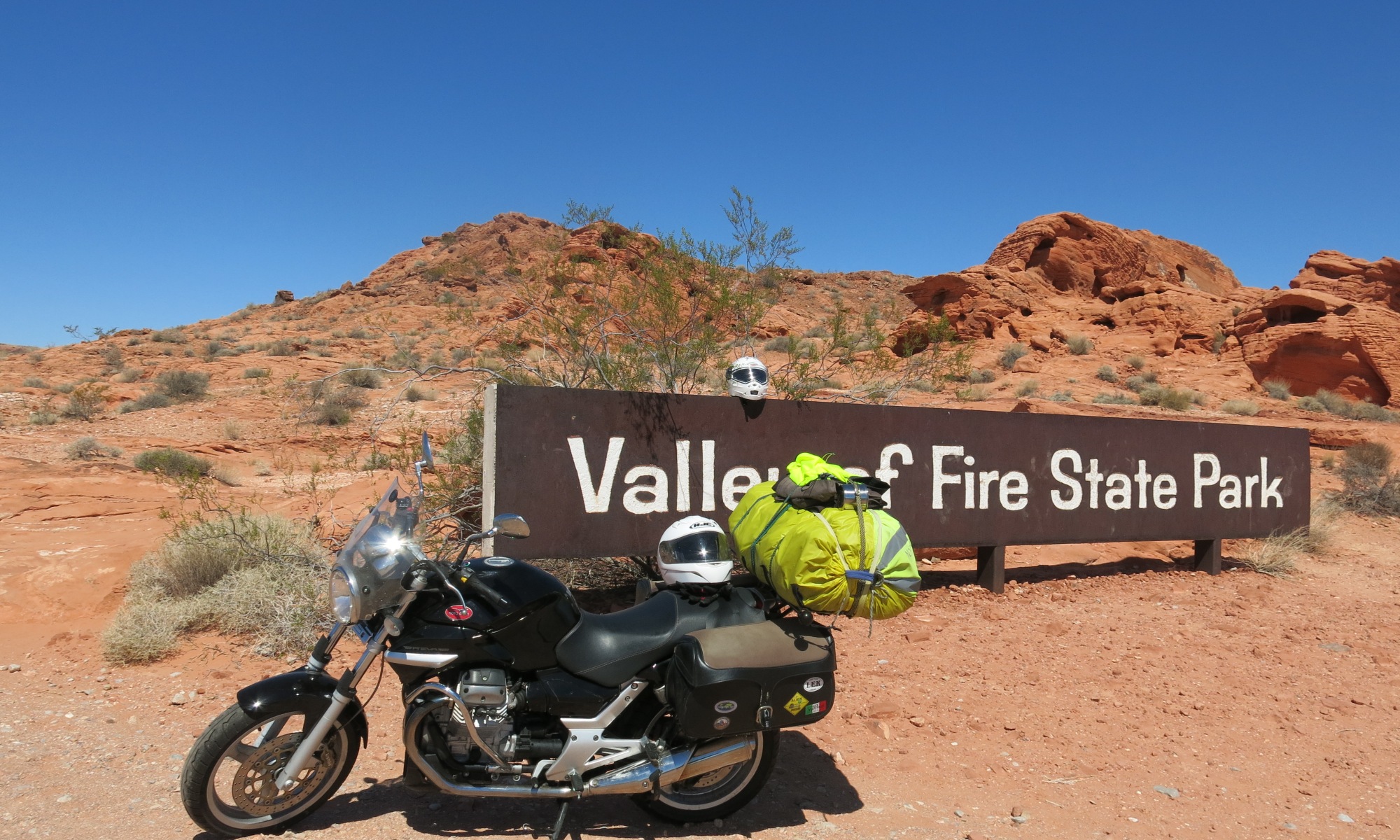 The first 24 hours of being in the USA are a blur. After the 10 hour flight and then staying awake until 11pm Pacific Time, 0700 British time, I did little more than doze on the first day.

The following day, though, we were up early and ready to explore. It was only 50 miles to Valley of Fire State Park. We wanted to check out the camp sites there so that I could do some night photography.

Riding into the park, the rock formations immediately grabbed me; it is very much like Arches National Park in Utah, but on a miniature scale – height wise, that is; the actual size of the park is huge.  I think I read it is about 42,000 acres.

The road soon became quite nerve-racking. The road would rise to a point that you couldn’t see beyond the top and the minute you got to the crest of the hill, there would be s series of really sharp bends – some of them almost 180 degrees! The photos don’t show those parts of the road – I was too busy hanging on tight with one hand whilst pushing my heart back down where it belongs with the other.

The first stop, naturally, was at the park sign.

A bit of history now. The name ‘Valley Of Fire’ is derived from the red sandstone formations, formed from great shifting sand dunes during the age of dinosaurs, 150 million years ago. Complex uplifting and vaulting of the region, followed by extensive erosion created the present landscape.

Other rock formations include limestone and shale. Prehistoric peoples of the Valley included the basket-maker people and, later, the Anasazi Pueblo farmers from the nearby fertile Moapa Valley.

The span of approximate occupation has been dated from 300BC to 1150 C.E.

Creosote bush, burro bush and brittle bush plus several species of cactus. In spring there are desert marigold, indigo and desert mallow. Resident birds include the raven, house finch, sage sparrow and roadrunner. Lizards and snakes are common in the park, including, rattlers, gophers and the king snake. Mammals include the coyote, kit fox, spotted skink, black-tailed jackrabbit and antelope ground squirrel. The desert tortoise is a rare species and is protected by law.

Jan, as always, hoped to find snakes – he actively goes looking for them; However, we only saw a mountain goat and a couple of big-horned sheep. 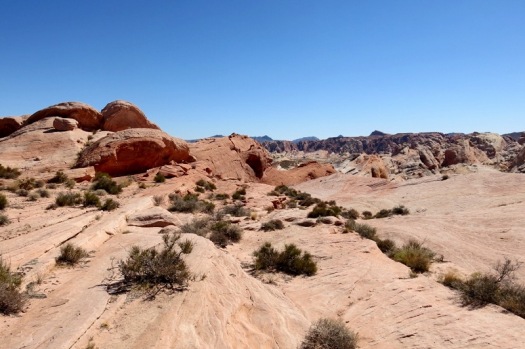 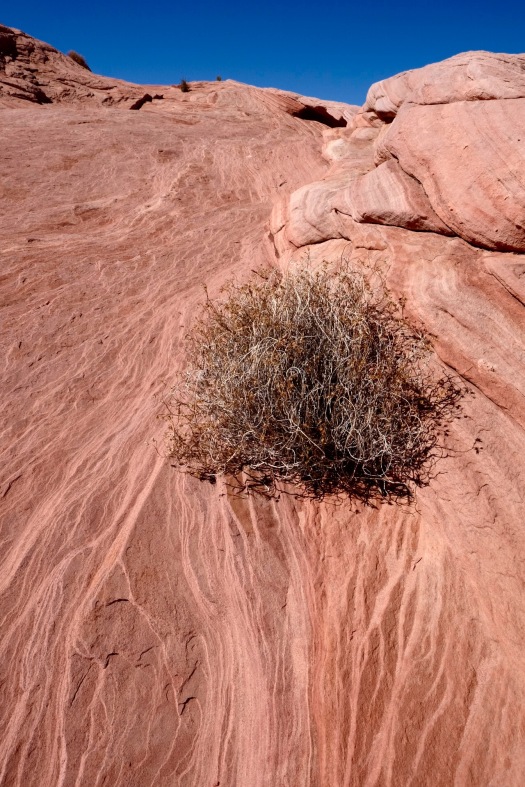 I did notice that some people have a nice comfy ride on large padded seats on their bikes; this particular bike is an Indian 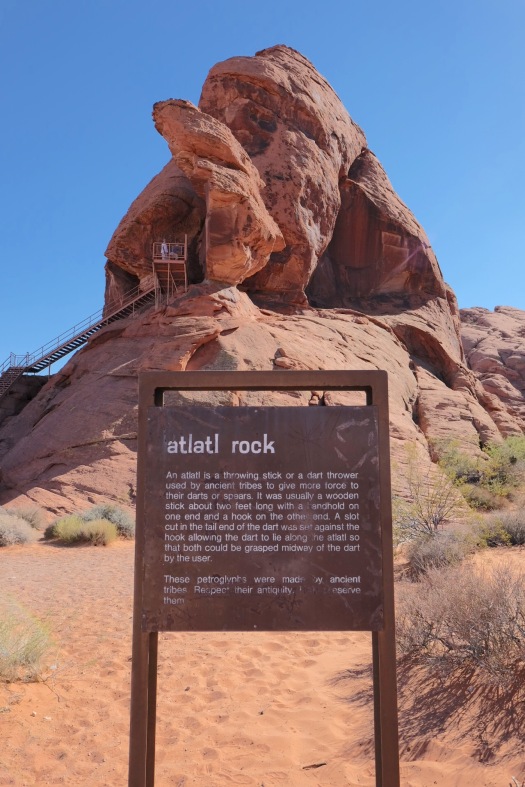 There’s a wave-like formation in the park and I had hoped to walk the mile to that  but, by now, we had drunk all the water we had brought. It was midday, scorching hot at about 38 degrees so I decided to bypass that this time and try to return at a cooler time on another day. Slightly disappointing but then I spotted something that kind of made up for it. A wedding shoot was going on. I approached the couple and the photographer whilst they were having a break from shooting. I congratulated them and asked if I could take a couple of photos of the bride. They were very amenable and the lovely young lady posed willingly for a couple of shots. Chatting, briefly, they told me they were Paiute Indians from the Moapa River tribe and they had wanted some of their wedding photos to be taken in the land of their ancestors. 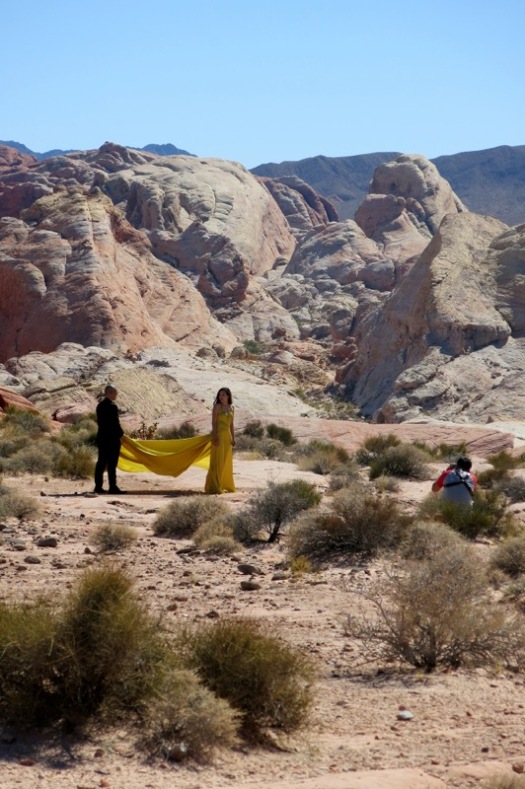 We finally arrived at the campsite after circuiting the park; it was not in the main park and we had noticed signs stating the park was only open dawn until dusk which meant I couldn’t get up to the wave to do the night shots and the Milky Way in any case.  As we approached the campground, the road became very gravelly and rough. There came a point where we didn’t dare ride any further in on a heavily loaded bike that was not for off-road. Our idea of camping was rapidly revised. We had all our gear on the bike and so we decided to continue on to Boulder a City and the Hoover dam. I had made a provisional booking at the Hoover Dam Lodge  which turned out to be a blessing because we had sweated so much, we were in dire need of showers; setting up camp in all that sand and dust wasn’t so appealing by the end of the day.

it was 63 miles to Boulder City. The ride was good – smooth with gentle curves on what seemed to be a new road surface. The only down side was that we were heading directly in to the setting sun for most of the ride. 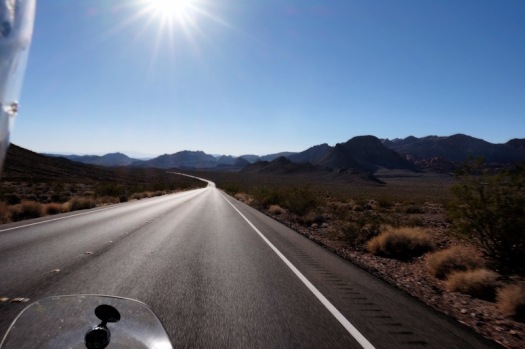 Not our normal type of motel/hotel, partly because of the hassle of getting all the stuff off the bike and into the room. However, this particular room (on the 9th floor) was very welcome; it was huge with two king size beds and a great shower with lovely organic toiletries and a good view of Lake Mead. 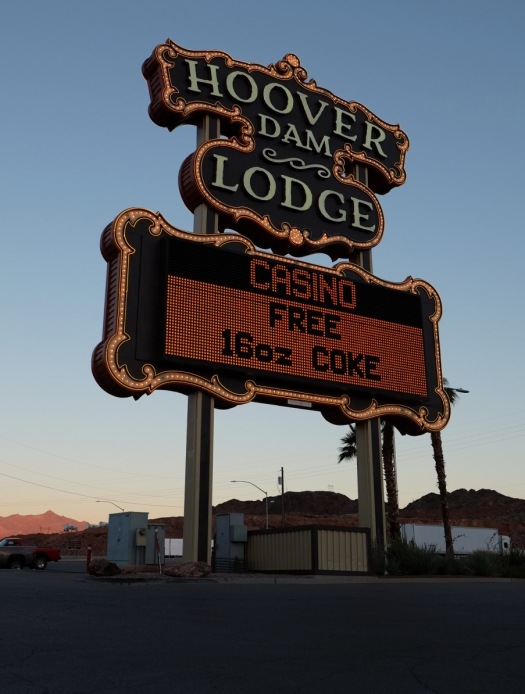 Even lying on the bed, I could see Lake Mead 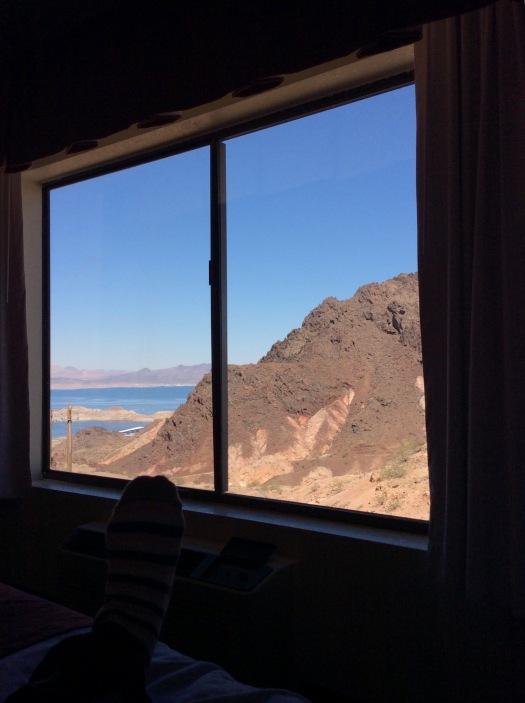 That’s it for now. Next post: The Hoover Dam.