We woke to a horribly grey and rainy Thursday – good job I spent the evening wandering around town with the camera.

There’s a trolley bus that takes visitors around Port Huron’s most interesting landmarks. It does make a stop outside our motel, so we decided to while away a couple of hours that way. 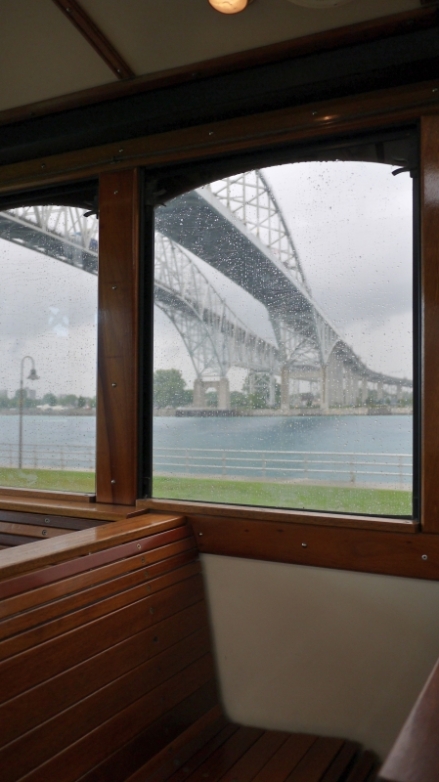 The ride that lasts about 30 minutes. You can be picked up anywhere along the route just by waving your hand to catch the trolley drivers attention.

The trolley travels along the banks of the St. Claire River. Just by looking out the east windows in many places you can see Canada and the Blue Water Bridge spans, the Thomas Edison Statue and the depot as it cruises along Thomas Edison Parkway. It also drives by the old Huron Lightship Museum,Fort Gratiot Lighthouse and Knowlton Ice Museum.

The earliest permanent settlement of Port Huron is generally dated at 1790.  A Chippewa Indian reservation was platted on the south side of Black River in 1807, the boundary running southwest through the proposed district.  The population dropped during the War of 1812, due to conflict in the Detroit area.  American soldiers founded Fort Gratiot near the base of Lake Huron in 1814.  Soldiers from all over the country served at the fort, some stayed and settled nearby.  Anselm Petit, the first verified resident, built the first house in Port Huron about 1819 on Court Street, just east of the proposed district.  By 1821 Louis Facer operated an inn near Quay Street, and four years later James Cook opened a store and trading house.  The town was generally known as Desmond at that time, with perhaps 50 people located close to the Black River, and 377 people in the surrounding area.

Activities in the 1830’s spurred growth.  The Black River Steam Mill Company built a sawmill on the north side of Black River near Seventh Street in 1833.  There were now two or three public houses, one shoe shop, four trading posts, eighteen dwelling houses, and various shanties occupied by Canadian mill workers.  Fort Gratiot Military Road, the first overland route from Detroit, was also constructed at this time.  In 1834, the first bridge over Black River was built.  Edward Petit platted the first village called Peru, early in 1835.  Judge Fortune C. White of Whitestown, New York bought 80 acres south of Black River and east of the Indian Reserve from Joseph Watson, once secretary of the Territory, but then an official in Washington.  Daniel Brown Harrington and White platted the Village of Port Huron in the fall of the same year.  Edgar White, his 16 year-old son, came in July of 1836 to look over the land.  He soon returned east, but by 1849 resided here permanently.  Fortune provided the funds for further purchases, while Daniel Harrington managed the land in return for one-quarter interest.  White’s Plat (which later became Olde Town) developed and the population grew.

In the 1840’s, the county had eight of the twenty-one steam sawmills in the state attesting to local economic activity. Land speculation from those outside the community heated up.  By 1850 the population was approximately 1500 people.  The village of Port Huron was formally organized in 1849, and the city incorporated in 1857.  During the 1840’s and 50’s, Port Huron was a station on the Underground Railroad for escaped slaves traveling into Canada.  After the Civil War, many of those families returned to Port Huron and settled.  The first families were William O. Rodney, George Kennedy, Eli and Rebecca Buckner.  They were sailors, plasterers, chefs, and other trades.  The city continued to grow rapidly.  It’s economy broadened as the lumbering industry declined.  Industries included manufacturing, railways, shipbuilding, and others.  The Edison family arrived in the spring of 1854 from Ohio.  William Pitt Edison was a partner in the livery business and his father, Samuel, had an observatory.  The family resided at the Fort Gratiot Reserve.  Thomas Alvah Edison spent his boyhood years here, before moving on. (from www.oldtownporthuron.com). We rode the bus and on the way back, I got off at the Gratiot Lighthouse hoping to get to the top – but the laws state you cannot climb the spiral metal staircase when shoes are wet from rain! I still joined a tour and the history was very interesting.

Fort Gratiot Light, the first lighthouse in the state of Michigan, was constructed north of Fort Gratiot in 1829 by Lucius Lyon.

The Fort Gratiot Light marks the entrance to the St. Clair River from Lake Huron (going south) in the southern portion of Michigan’s Thumb. The light is still active and the grounds are an active Coast Guard facility, but it has recently been handed over to the Port Huron Museum. It is the oldest surviving lighthouse in Michigan.

As early as 1823, the government recognized the importance of protecting commerce on Lake Huron and, on March 3rd of that year, Congress appropriated $3,500 to construct “a lighthouse near Fort Gratiot, in Michigan Territory”. Winslow Lewis, a Massachusetts contractor specializing in lighthouses was awarded the contract and he, in turn, contracted Daniel Warren of Rochester, New York to build the light tower and keeper’s dwelling. April 2, 1825, Congress appropriated an additional $5,000 for the project and on August 8th, it was completed. The tower rose 32 feet above ground level and was 18 feet in diameter at the bottom and 9½ feet at the top. It was the first lighthouse constructed on Michigan shores.

Rufus Hatch and Jean B. Desnoyers operated the light until December 2nd when George McDougall of Detroit arrived. McDougall had been appointed as official keeper after pulling some political strings. He was a large man, weighing over 200 pounds and finding that the specifications for the lighthouse varied considerably from what actually existed, he reported his dismay to William Woodbridge, then Collector of Customs at Detroit. Woodbridge would later become Governor of Michigan and a Senator, but as Collector of Customs, McDougall would inform him that the stairs were so steep that they had to be ascended sideways and the trap door, measuring 18 inches by 21¼ inches was barely large enough to squeeze through.

The light had other problems also. It was not only poorly located, not being visible until boats were too near the river’s mouth, it was poorly constructed. During the summer of 1828 the walls began cracking and the tower sagged toward the east. Erosion, caused by the current was also eating away the ground and after a violent three-day storm in early September, the tower was so severely damaged that in late November it collapsed completely. Immediate steps were taken to erect a new structure, at a better location. $8,000 was appropriated for the project by an Act of Congress, March 2, 1829. Lucius Lyon, who later became a U. S. Senator was awarded the contract in April. The structure was 74 feet high and 25 feet in diameter, constructed of brick and completed in December, 1829. In 1861, the height was increased to 86 feet and in 1874 a brick duplex was added for the keeper and his assistants. The structure still stands today. McDougall remained keeper until his death in October, 1842. Since he was constantly bothered by gout and numerous other ailments, an assistant keeper was always employed by him to do the actual work. Reuben Hamilton performed the work for many years, being paid directly by McDougall since the government did not authorize an assistant keeper until June, 1870. Today’s light is completely automated, has a range of 8 miles and flashes for one half second every 15 seconds.

151 years after the first light was exhibited at Fort Gratiot, a silent sentinel still beams out to guide a new generation of Lake Huron mariners. In 1971, the Michigan Historical Commission named Fort Gratiot Light a historic site. As Port Huron grew and the St. Clair River became a popular spot for tourists and recreational boaters, lifesaving operations, which for years had centered around the Lake View Beach Station, began a gradual shift southward.

In 1931, 3½ acres of land adjoining Fort Gratiot Lighthouse was purchased by the government and on April 13, 1932, the Coast Guard opened the Port Huron Station. Originally, the station consisted of a main building, boathouse and lookout tower with crew quarters, breakwater and fog signal added later. Among the duties assigned to the Port Huron Station was the responsibility of providing supplies and transportation to the men aboard the Lightship Huron. The Lightship’s station had been established in 1893 on Corsica Shoals, replacing a somewhat ineffective gas buoy. Three vessels bore the designation as Huron Lightship from 1893 to 1970. The first of these was a wooden-hulled vessel, painted red with the words “Corsica Shoals” painted white on her sides. Officially listed as Lightship No. 61, she served from September 1893 until 1921. During the November storm of 1913, in which at least 12 ships and 200 lives were lost, the lightship was torn from its moorings and forced onto the Canadian shore near Point Edward. She was replaced in 1921 by Lightship No. 96, the first vessel to actually be called Huron Lightship.

It was a real shame we couldn’t climb the steps – but I guess the view wouldn’t have been that good on this cloud-filled day. Our guide did take us into the lighthouse though. 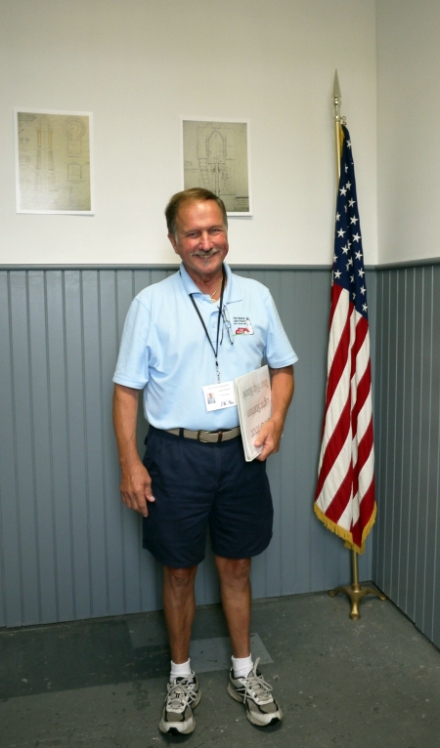 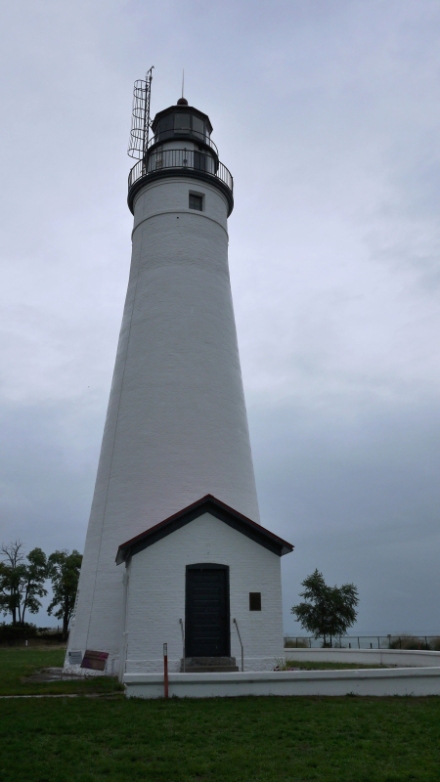 Well the rain didn’t ease off and photography was difficult with the droplets of water hitting the lens so I returned to the hotel and Jan. There was a nice bistro within rain-dodging distance of the hotel, 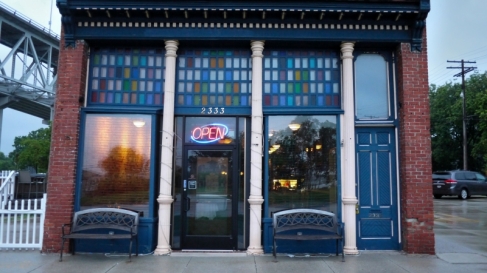 so we rain-dodged it over there for dinner; very nice indeed

It was an early night to bed – ready for the final leg of the journey; crossing the bridge to Canada and the 144 miles to Hamilton where we store the bike.

On another grey and showery day

First, we needed to find and fill up with engine oil – so, despite being right there at the bridge, we had to run the early morning traffic gauntlet into the big shopping area so we could find the right oil. 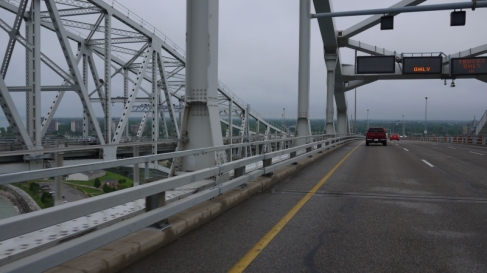 Unusually, there was a queue to go through Canadian Border patrol

but once we reached the head of the queue, we had a nice chat with the officer – he had obviously also been to Banff and Jasper. He wished us a safe ride and we were through – out onto the QE 402 until we reached London (passing names like Warwick and Stratford); at that point, we joined the busier 401 for around 40 miles and then, once on a quieter road and feeling a bit stiff and damp, we decided to pull off for a coffee at one of the wonderful Tim Horton’s cafe and bakeries.

Another group of bikers also called in for a little respite and warmth from the drizzle; these guys were headed for New York from somewhere in Michigan. 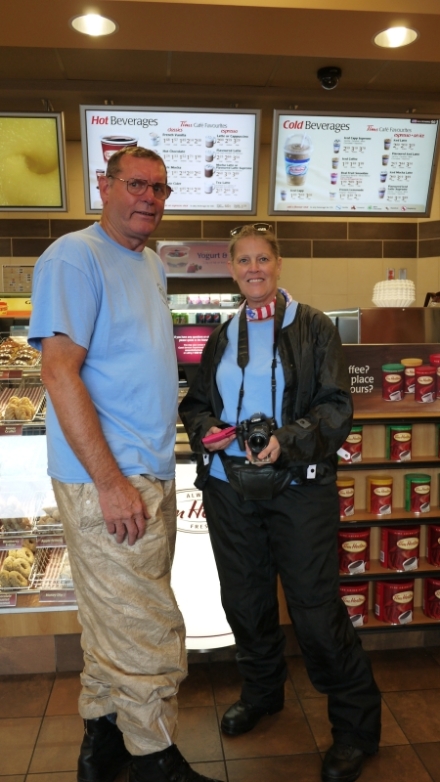 These guys know how to travel – no loading up a heavy bag every day and rather luxurious seating arrangements. 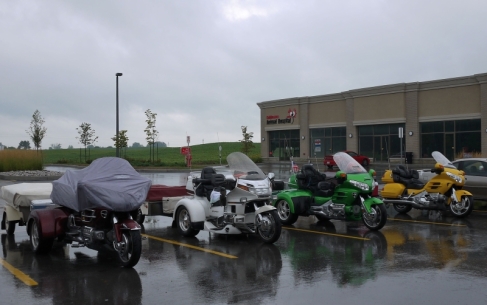 It was only another 24 miles to Hamilton and, fortunately, we had booked a room in advance 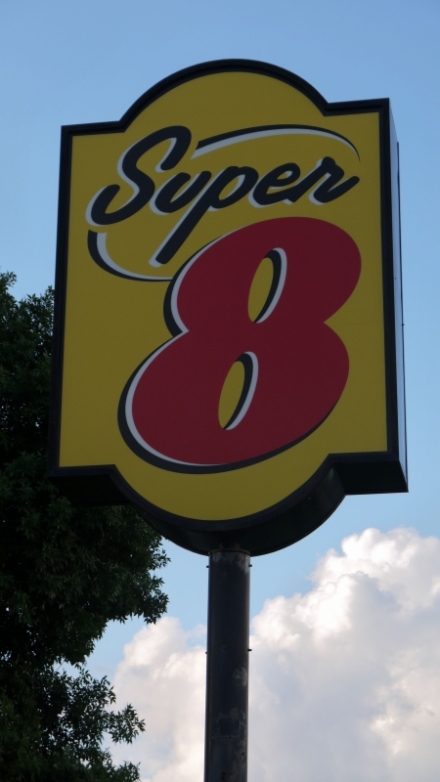 Really and truly – it was just the one; we were too tired to party so we had an early night – well, I didn’t, I came back to start catching up on the blog.

The storage unit is booked now and Jan has just booked transport to Toronto airport for Monday morning. Tomorrow  (Sunday) we will take the bike and put her into storage for yet another 9 months.I’ll give you the final mileage then. The weather is still miserable, so the Port Dover ride is looking unlikely today, but one can only hope.