After leaving the Tioga Pass, we stopped for a coffee and snack and then headed straight for Mono Lake; it is around 9 miles from Lee Vining to the entrance of the lake.

The first few feet of the access road is solid – but that soon ends and you are faced with about a mile of gravel. Our bike is not really suited to off-road, so we take it very, very slowly. About a quarter of the way in, Jan (who should work for the CIA) said to me, ‘ I don’t like this; the couple in that car’ (which was parked on the opposite side of the trail and facing towards the exit), ‘that couple is smoking a crack pipe’.

No sooner had he said that than the car did a U-turn and started following us, raising a hell of a dust cloud at the same time. Jan slowed to almost stop but the car stayed behind us for maybe another quarter-mile. At this point,a car came towards us, leaving the Lake. The red ‘crack’ car then sped ahead of us, did a U-turn and headed back towards the exit. Jan reckoned they realized there were other people around and just backed off. Who knows? Maybe they were minding their own business, maybe not; but best to be alert and careful.

Meanwhile, we still had another horrible half mile of gravel to negotiate and more than once, the back wheel slid off to one side.

We finally reached the ‘car park’ and climbed off. Another motorbike pulled in then, a BMW; we had a brief chat with the couple and then made our way down the boardwalk to the lake and the tufa.

And it is otherworldly beautiful. If you can catch the light just right, this place is a photographers dream  but, we didn’t have the time to wait for the right light.

Trillions of brine shrimp eat and mate beneath the briny waters of Mono Lake as Wilson’s Phalaropes feast on alkali flies in preparation for their non-stop flight to South th America.

At this point, if you aren’t interested in ecology and stuff, please go down to the photos

As soon as you step close to the lake, a million little flies take off in formation; they aren’t the usual kind of flies but alkali flies. They don’t fly any higher than your ankles and they don’t land on you; it is really interesting to watch them. I tried to take some photos but didn’t really capture the way they move.

You can hold them under water as long as you please–they do not mind it–they are only proud of it. When you let them go, they pop up to the surface as dry as a patent office report, and walk off as unconcernedly as if they had been educated especially with a view to affording instructive entertainment to man in that particular way.

BUZZZZZZZZZ; If you listen closely, this is what you hear at the edge of Mono Lake as swarms of black alkali flies carpet the shoreline. Walk among them and they move away from you, not at all interested in humans. If you were algae in the lake, it would be a different story. Along the shoreline, at the surface, and even beneath the lake, you can watch alkali flies busily feeding on microscopic algae.

At Mono Lake flies are food. Most birds prefer dining on the flies. Alkali flies provide more fat and protein than the brine shrimp. This is the principal food that the birds use to grow new feathers and then migrate three thousand miles non-stop to South America. In the mid to late summer the Wilson’s Phalarope can be seen spinning in shallow water, creating a miniature vortex that brings alkali fly larvae and pupae to the surface for easy pickings. You can also watch California Gulls and Brewer’s Blackbirds run along the shoreline with beaks open filling themselves with adult alkali flies.

The last time we were here, we met up with one of the biologist rangers who demonstrated and told us lots of interesting facts about the lake. We got to collect brine shrimp and we even tasted the extremely salty water.

Within Mono Lake’s briny waters are trillions of brine shrimp, Artemia Monica, a species of brine shrimp found nowhere else in the world. An estimated 4-6 trillion brine shrimp inhabit the lake during the warmer summer months. Mono Lake shrimp are tiny, about the size of your thumbnail, and by July Mono Lake water looks very much like shrimp soup. Brine shrimp have no practical food value for humans, but birds regard them as haute cuisine. Abundant shrimp provide a feast for the birds, yet the birds barely put a dent in the brine shrimp population until nearly two million Eared Grebes arrive for “shrimp cocktail” in the autumn.

FINALLY, Tufas; what are tufa?

A COMMON ROCK IN RARE FORM

Tufa above the water no longer grows and is susceptible to erosion.Tufa is essentially common limestone. What is uncommon about this limestone is the way it forms. Typically, underwater springs rich in calcium (the stuff in your bones) mix with lake water rich in carbonates (the stuff in baking soda). As the calcium comes in contact with carbonates in the lake, a chemical reaction occurs resulting in calcium carbonate–limestone. The calcium carbonate precipitates (settles out of solution as a solid) around the spring, and over the course of decades to centuries, a tufa tower will grow. Tufa towers grow exclusively underwater, and some grow to heights of over 30 feet. The reason visitors see so much tufa around Mono Lake today is because the lake level fell dramatically after water diversions began in 1941.

Enough of the description – here are some photos. 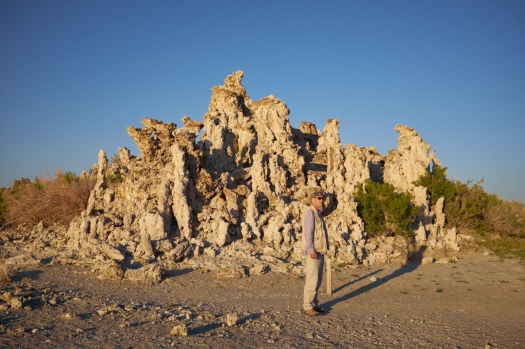 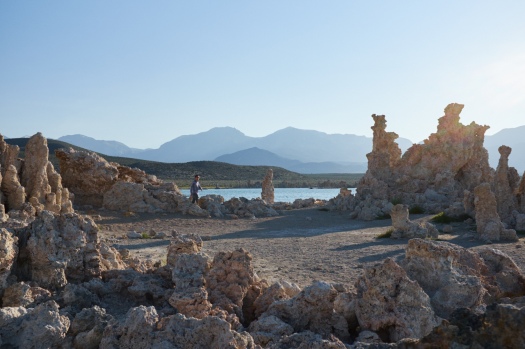 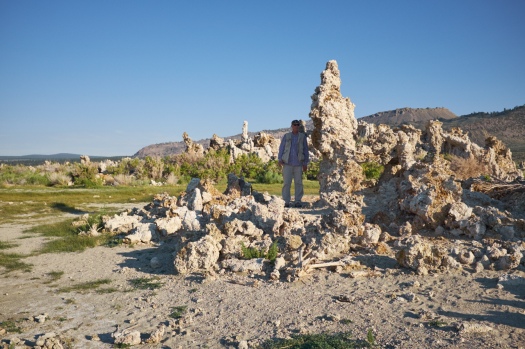 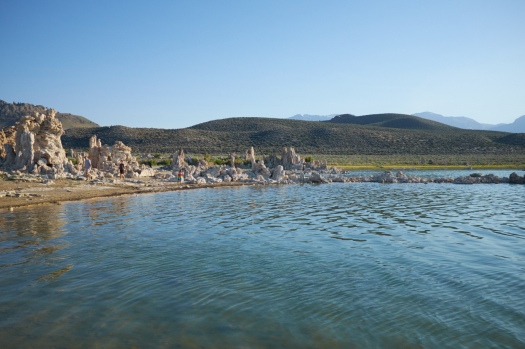 We tried to stay until sunset but, it had been a long day and we had already ridden over 120 miles, so we decided to head back to the tent before it got too dark – we had that gravel road to negotiate too.

I kept looking back to check on the sunrise and, in the end, we didn’t miss anything because a mist descended and the haze would have spoiled any sunset shots. In any event, we had an early start to make and some more hot miles to ride.