We set off for Zion National Park soon after 6am this morning and have done a lot of walking today. The comparative coolness of the deep valleys of Zion NP were such a refreshing change from the excessive and abnormal heat that this part of the continental USA has been experiencing during the past week. It was heaven – or, should I say, Zion.

Vehicles are not allowed to drive through the park any longer – free shuttles are provided; this helps conservation of the park and also prevents huge queues of traffic forming.

Another new innovation the park has introduced is that they no longer sell bottled water or any drinks that come in plastic bottles; you need to bring an empty bottle or buy an eco-friendly one in one of the visitors centres and you can fill up with fresh drinking water for free at any of the 8 stops the shuttle makes. A great idea! 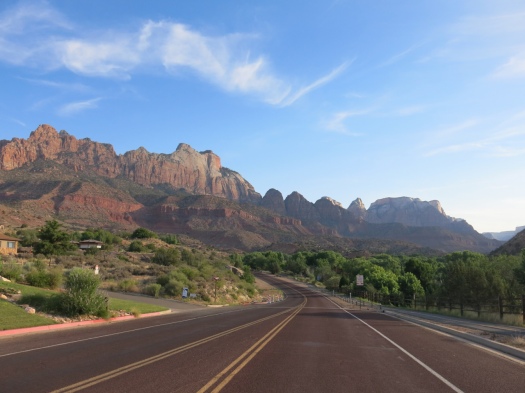 Zion National Park is located in the Southwestern United States, near Springdale, Utah. A prominent feature of the 229-square-mile park is Zion Canyon, which is 15 miles (24 km) long and up to half a mile (800m) deep, cut through the reddish and tan-colored Navajo Sandstone by the North Fork of the Virgin River. The lowest elevation is 3,666 ft (1,117 m) at Coalpits Wash and the highest elevation is 8,726 ft (2,660 m) at Horse Ranch Mountain. Located at the junction of the Colorado Plateau, Great Basin, and Mojave Desert regions, the park’s unique geography and variety of life zones allow for unusual plant and animal diversity. Numerous plant species as well as 289 species of birds, 75 mammals (including 19 species of bat), and 32 reptiles inhabit the park’s four life zones: desert, riparian, woodland, and coniferous forest. Zion National Park includes mountains, canyons, buttes, mesas, monoliths, rivers, slot canyons, and natural arches.

Human habitation of the area started about 8,000 years ago with small family groups of Native Americans; the semi-nomadic Basketmaker Anasazi stem from one of these groups. In turn, the Virgin Anasazi culture developed as the Basketmakers settled in permanent communities. A different group, the Parowan Fremont, lived in the area as well. Both groups moved away by 1300 and were replaced by the Parrusits and several other Southern Paiute subtribes. Mormons came into the area in 1858 and settled there in the early 1860s. In 1909 the President of the United States, William Howard Taft, named the area a National Monument to protect the canyon, under the name of Mukuntuweap National Monument. In 1918, however, the acting director of the newly created National Park Service changed the park’s name to Zion, the name used by the Mormons. According to historian Hal Rothman: “The name change played to a prevalent bias of the time. Many believed that Spanish and Indian names would deter visitors who, if they could not pronounce the name of a place, might not bother to visit it. The new name, Zion, had greater appeal to an ethnocentric audience. The United States Congress established the monument as a National Park on November 19, 1919.

We parked the bike and caught an early shuttle to the furthest point east on the establish trails – The Temple of Sinawava (‘Sinawava’ refers to the Coyote God of the Paiute Indians).

There is a fairly easy trail that follows the Virgin River to ‘The Narrows’ which is the narrowest section of Zion Canyon. This gorge, with walls a thousand feet tall and the river sometimes just twenty to thirty feet wide. The wonderful cool air so early in the morning was a very welcome respite from the heat and Jan and I spent a couple of hours playing by the river (including with the little people again).

Jan built a little cairn and one of my little men climbed it, somehow: Jan also found lots of tadpoles in the river 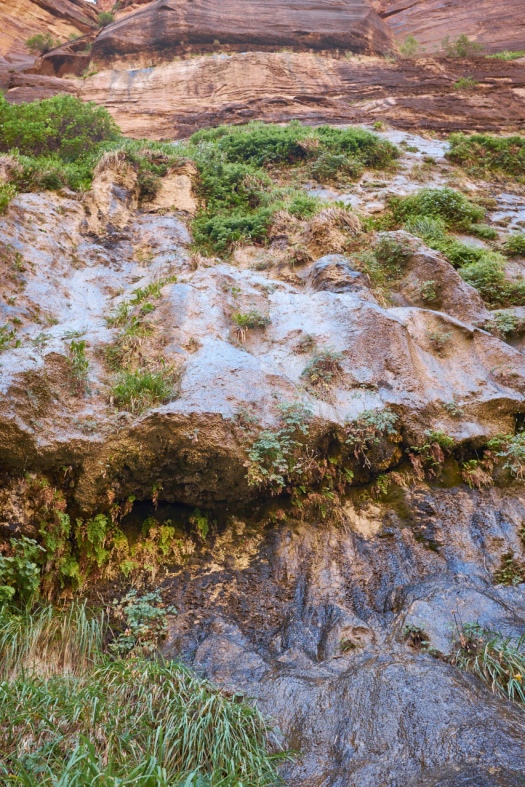 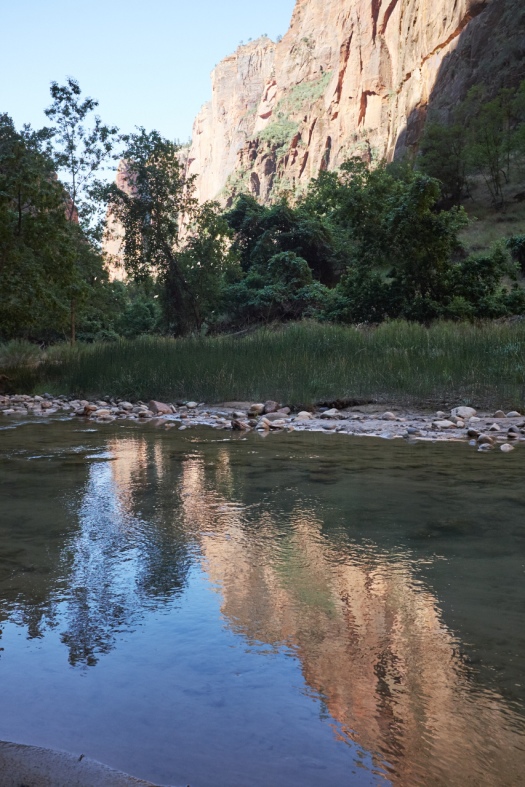 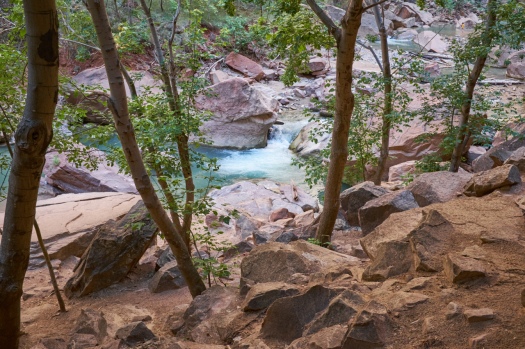 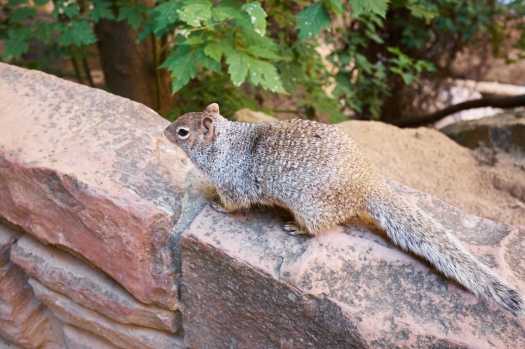 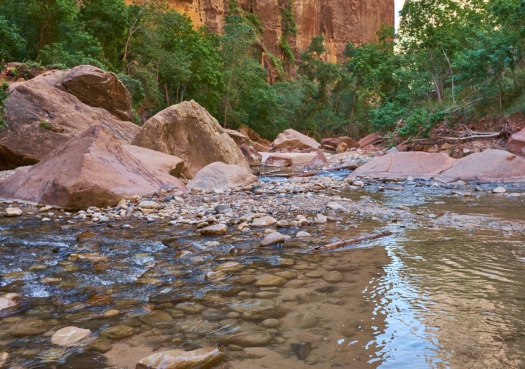 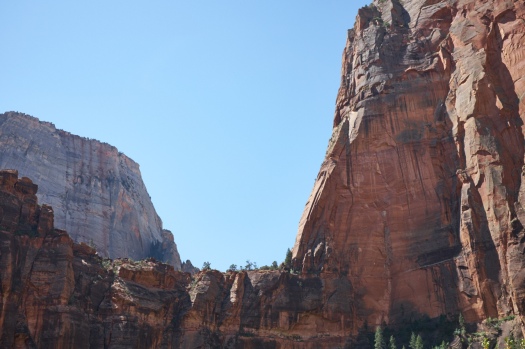 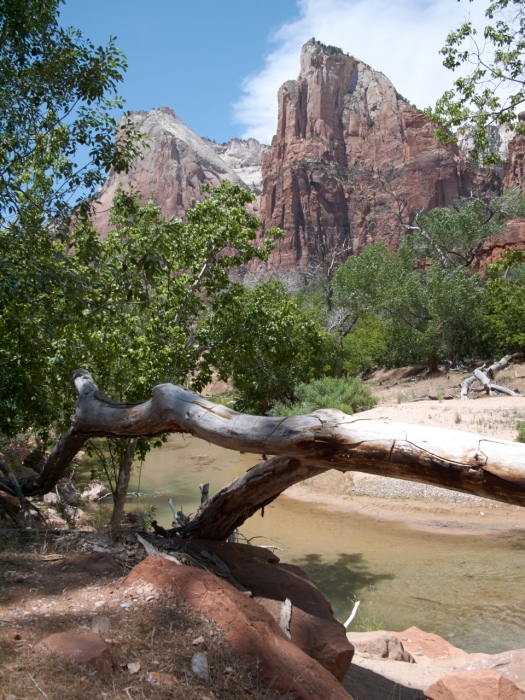 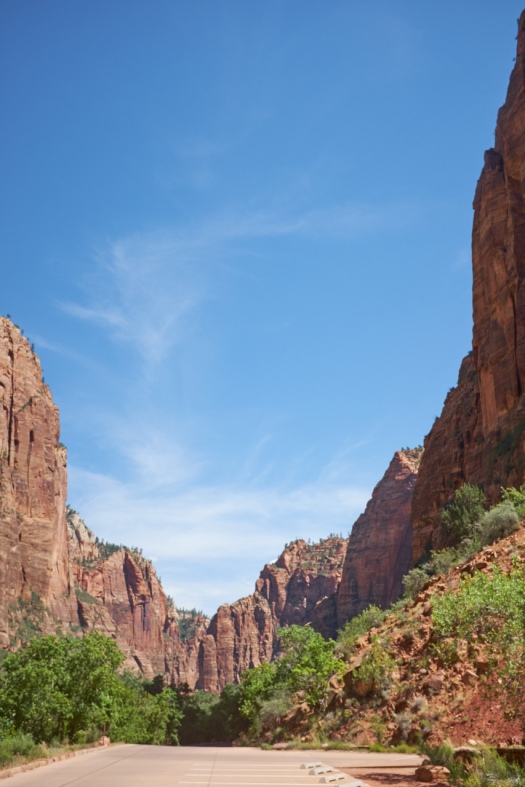 At midday, Jan and I caught a shuttle down to Zion Lodge for lunch (we had had nothing but water all day); we did dismount the bus at two of the stops – to take some photos and to look for snakes!

Lunch was very nice little salmon fishcakes with a aioli dip and humous, pitta and salad.

We then split up – Jan to make a few more stops to take photos and then to visit the museum of human history – while I decided to hike to Emerald Pools. 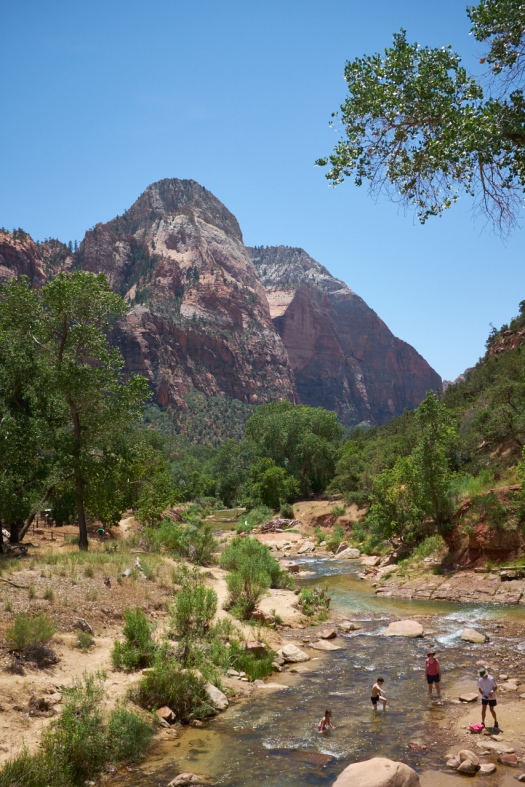 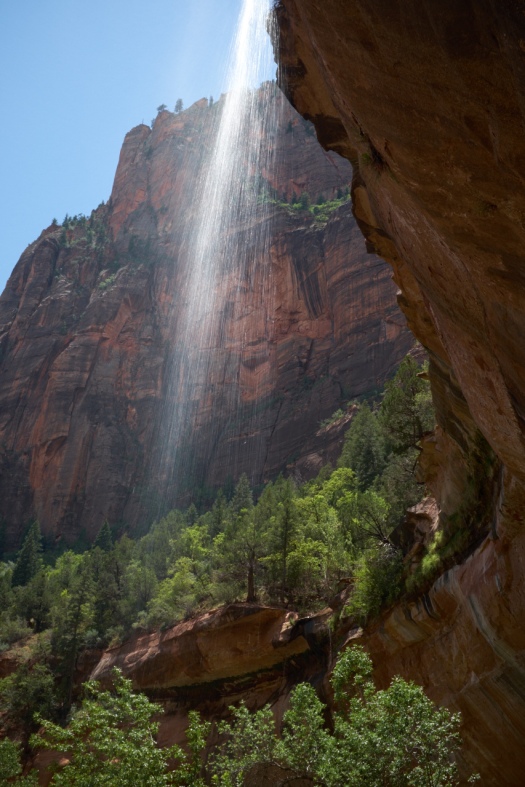 Emerald Pools was not emerald at all today – the drought means the waterfalls were small and the pools were very low.

It was still very hot by midday so lots of people took the opportunity to cool off. 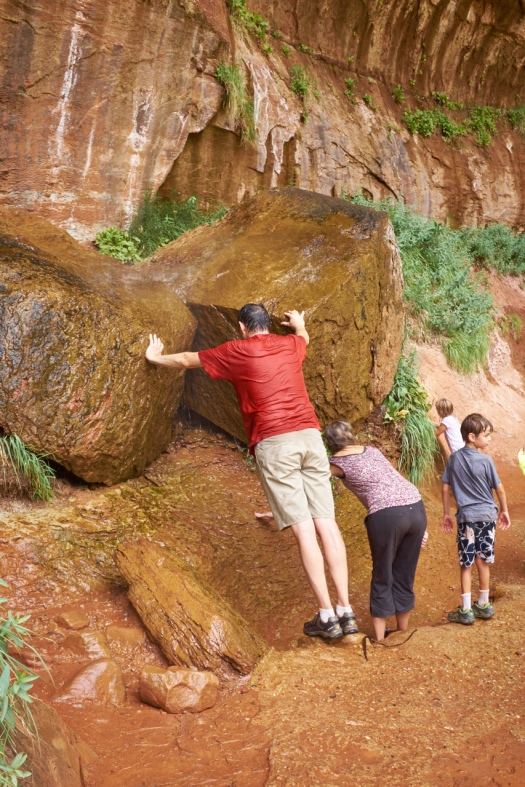 I noticed the sky was beginning to look a little threatening to the east and I knew Jan would be keen to ride back to the motel ahead of the weather; there had been some thunderstorm warnings on the weather channel last night. And when the weather changes here – it changes fast and it changes dangerous.

I met Jan in the visitors centre near the entrance/exit of the park; it was almost 5pm anyhow.

Just one stop on the way home – a quirky trading post I just love, in a tiny town called, Virgin. 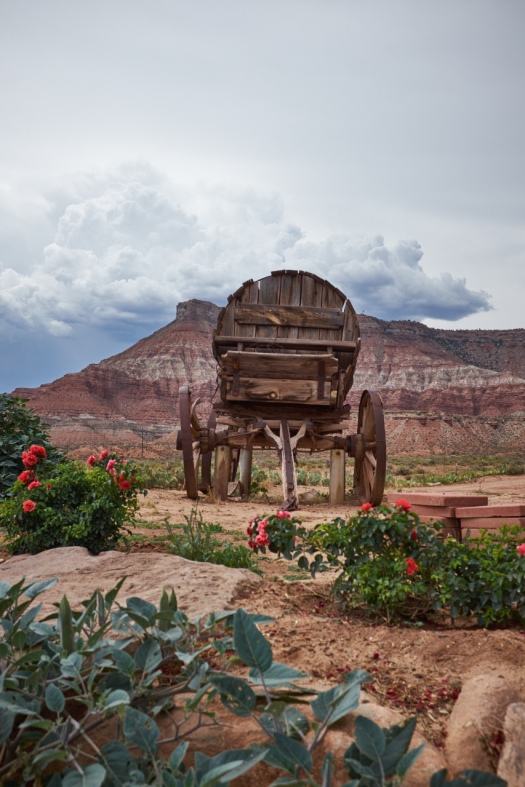 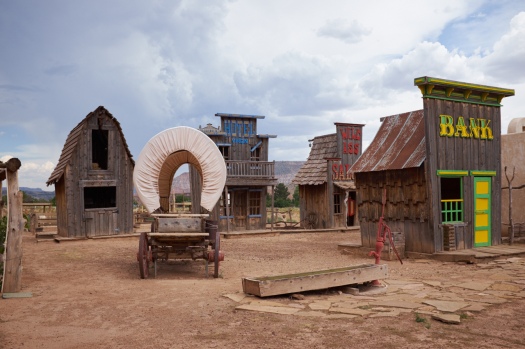 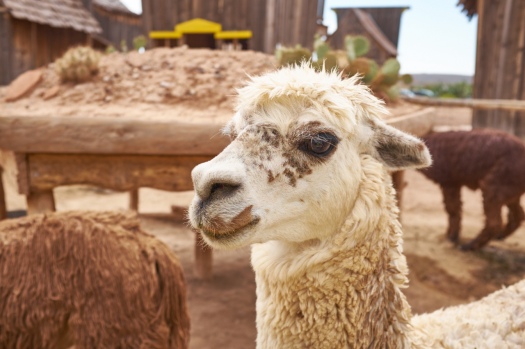 We couldn’t linger though – the weather was getting ahead of us; even the lizards were scuttling for shelter….

We made it before the weather – didn’t happen 🙂 But you never know.

That’s it for now; I need to back-track a little tomorrow; from Mesquite, NV to Hurricane, UT.