Hi there, I have just had a 4 day rest in the favourite town of Christine and mine, Kanab, Utah where the waitresses in the diner hang up their holsters when coming on duty 😉 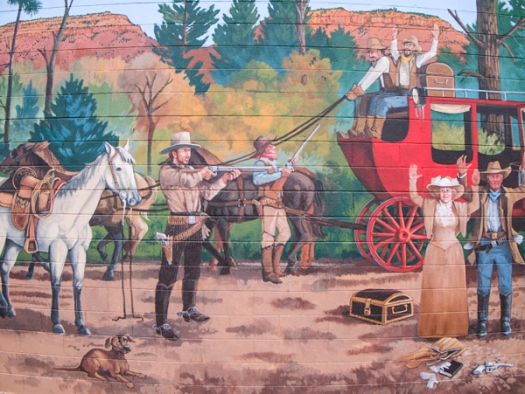 I already mentioned that this is also known as ‘Little Hollywood’ and was the crew the base for many of the most famous westerns.

Well it continues to draw film crews. I had a beer with a Brit from a film crew who were there to film Bear Grylls. True to his SAS and expert survivor credentials, Bear was off in the hot and remote Utah desert – whilst his crew were camping out in a motel in town.

The motel was filled – with bikers and the little Breva looked, well, little. 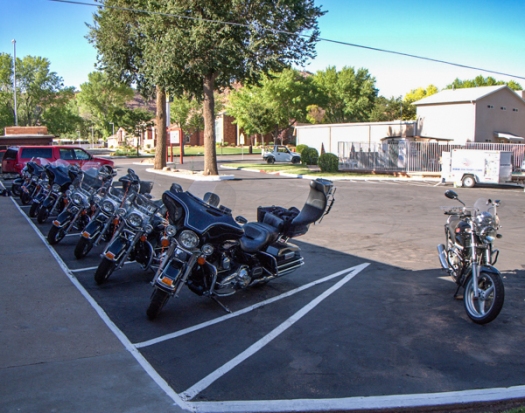 As you look at the photos that follow, you will get an idea of just how remote this area, Grand Staircase Escalante is. The Grand Staircase-Escalante National Monument is a vast landscape, one-hundred by two-hundred miles, almost two million acres of plateaus, mesas, buttes, slot canyons – all in a primitive setting and named with descriptions that reflect the difficulties of the terrain, like Death Hollow and Hell’s Backbone Road; it is governed by the BLM (Bureau of Land Management). For more information on this fantastic area of geological interest, take a look here 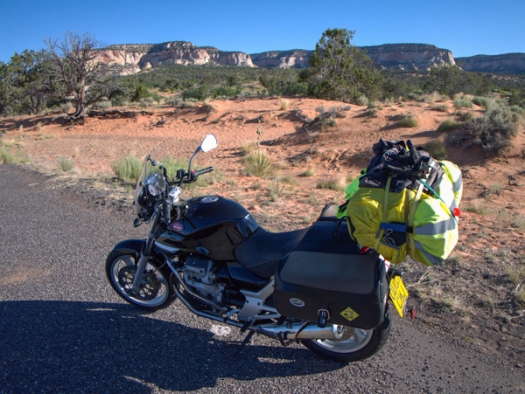 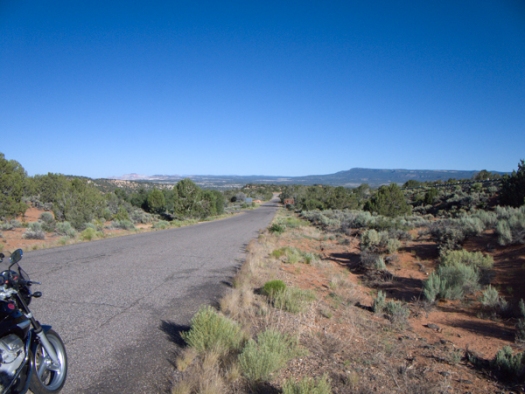 Apart from the fantastic scenery, I did have a couple of encounters with heifers jumping into the road, then stopping for a good look around.

In one  a small town, I had to change lanes because of a couple of cows, walking towards me, in my lane. And on 2 separate occasions, I had to beep the horn at deer, about to cross the road. I also had issues with the strange tar stuff, that they use to  repair cracks in the road, on hot days, it gets soft, and as you cross it, it’s as if your rear end  is sliding away from you. Very disconcerting, I spoke to a couple of guys on Harleys, wondering if  the wider tires  made any difference, but no, they said it was the same for them. 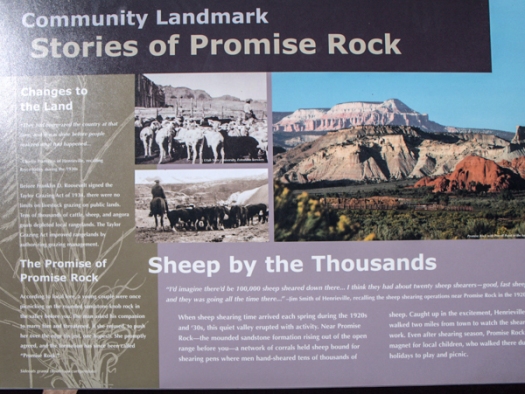 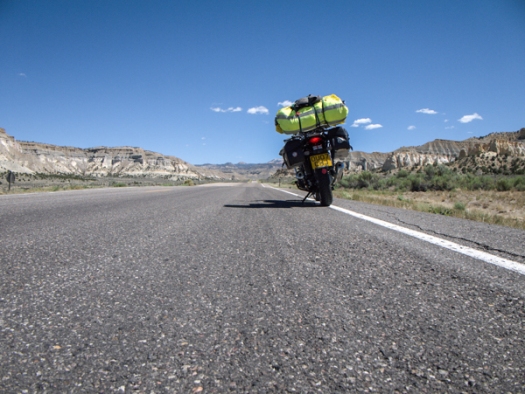 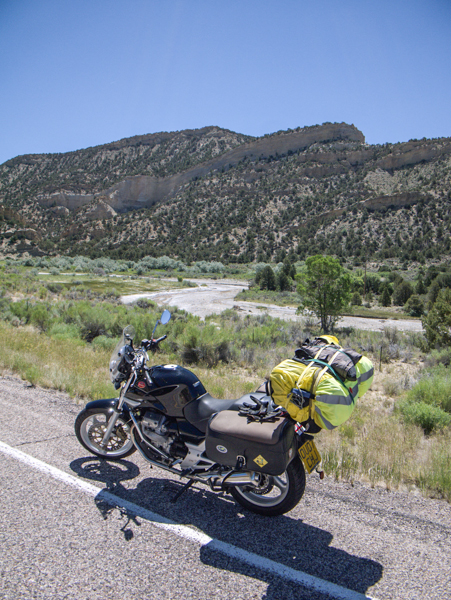 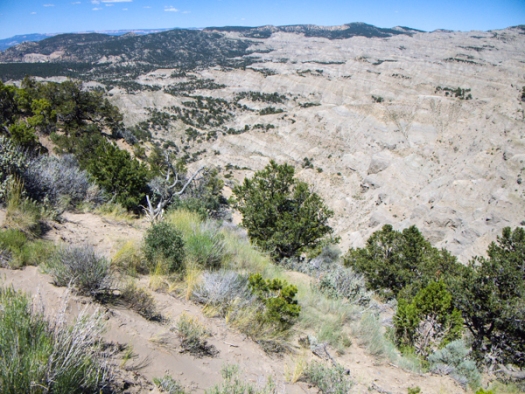 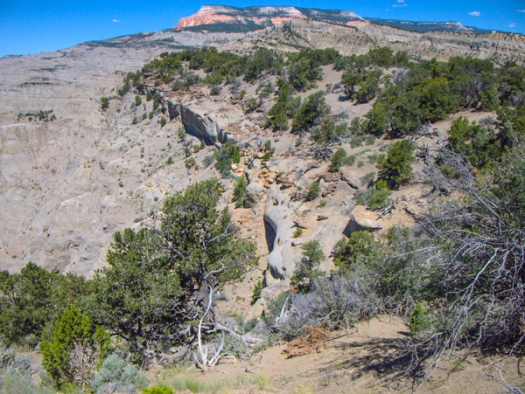 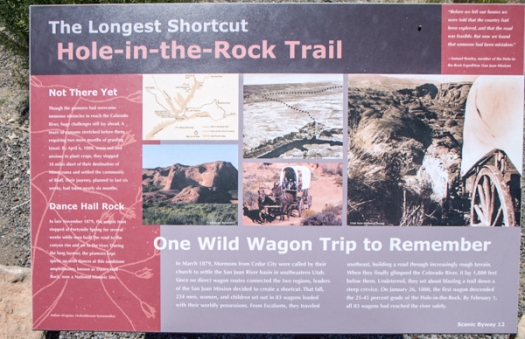 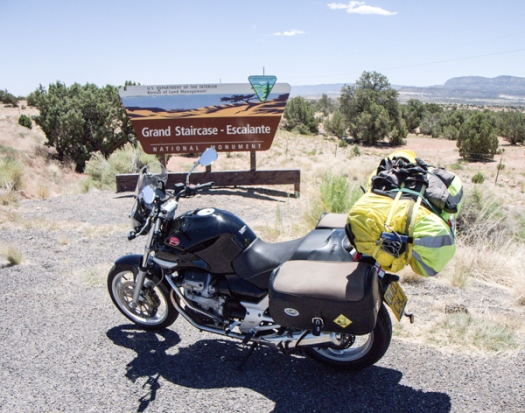 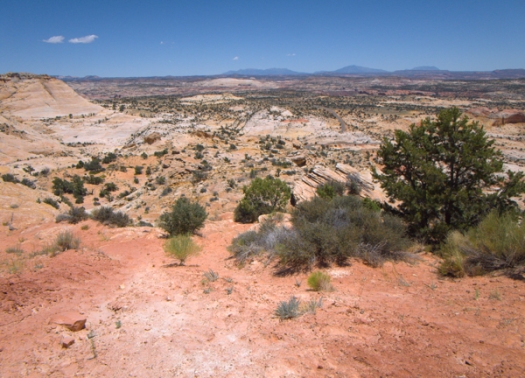 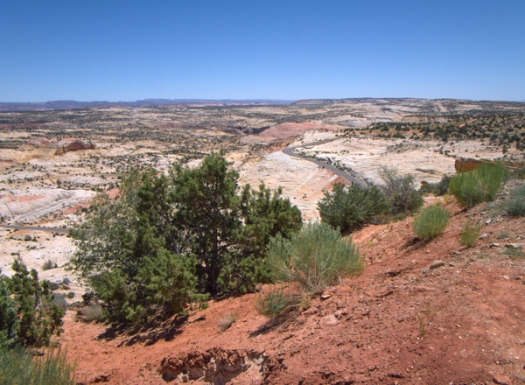 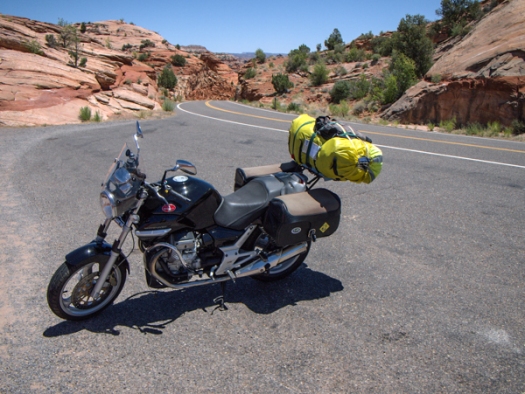 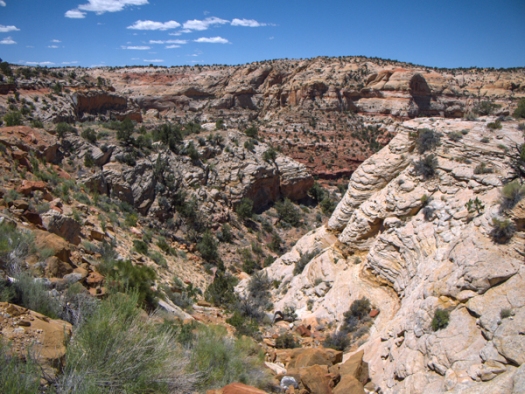 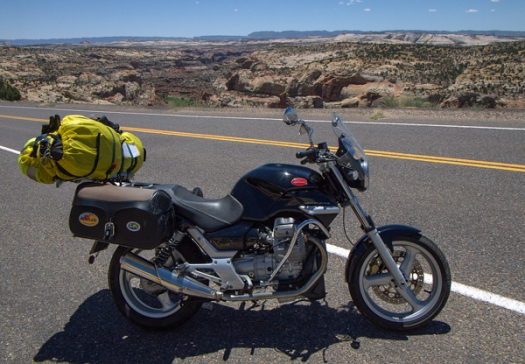 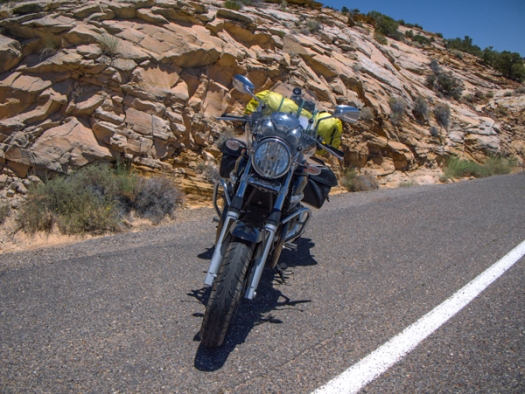 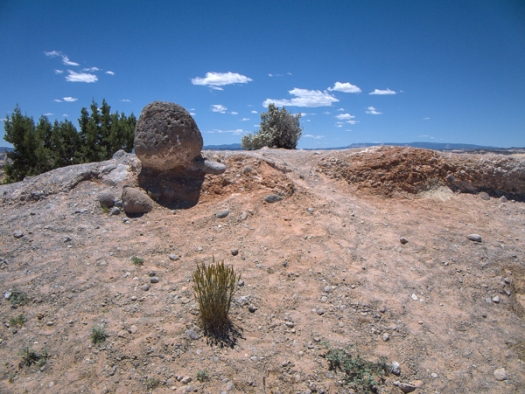 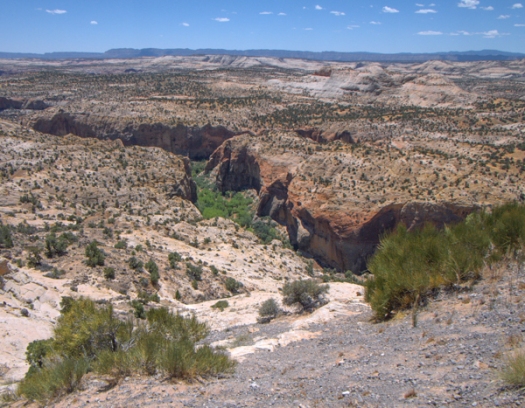 It’s strange how these cinder balls are always on top 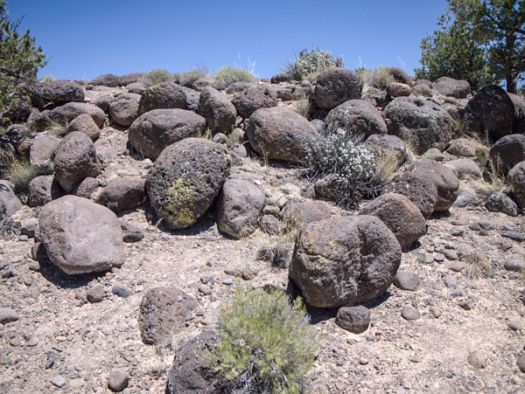 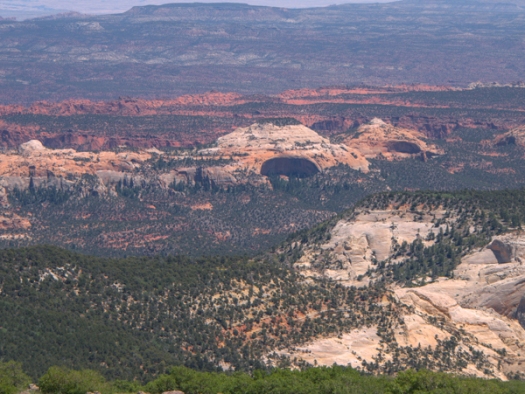 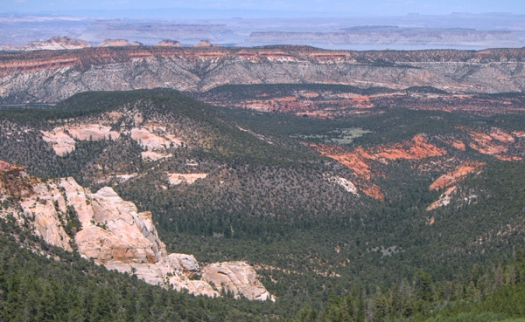 It was only 178 miles to my next destination, Torry (our other favourite town). Stopping to take photos meant it was early evening before I got to Torrey. I filled up at the gas station bought a coffee and phoned Christine to let her know I was here. Next job was to find a motel. There are lots here to choose from, but, because the town is on the edge of Capital Reef National Park, they can be a little expensive. So I made my way to the furthest edge of town and booked two nights in the Boulder View Motel where he have stayed on previous visits. $68 is not bad for such a popular town.

I unpacked the notebook to Skype Christine so she could get to bed. Then I set out for some vittles and a beer  and came across a new bar/restaurant that had not been here three years ago, the last time the two of us were in town (last time here, I had rattlesnake patties). Looked promising and had a good steak menu so in I went; I didn’t really expect to end up being entertained by a country and western band. 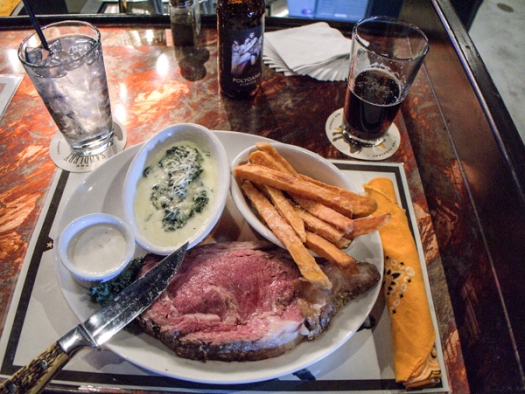 OK, it was a bit dark – but you get the picture 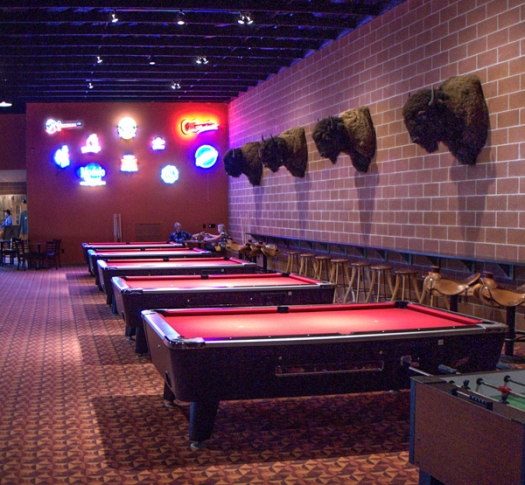 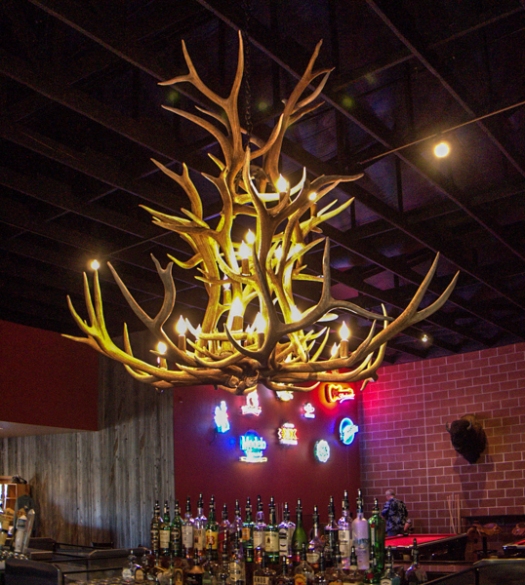 Above – an actual gun holster of Roy Rogers
below: (Christine here – hey, I didn’t take the photo!) 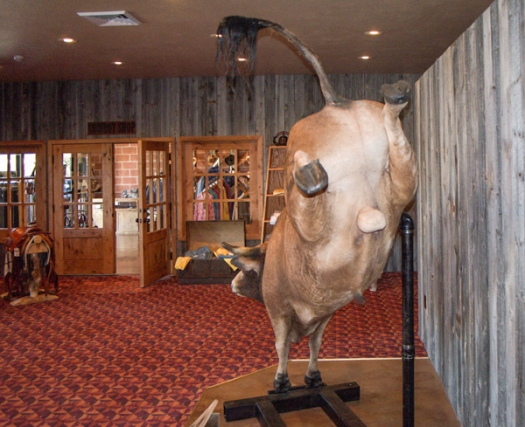 Here for two days and then it is time to turn around and head back east. I’m heading back to Evanston for about four days as I have decided to order a Macbook Air – sick of this problem with Windows and Zorin. The motel in Evanston is clean, cheap and has great wifi . Also, July 4th and Independence Day is close – so I am booked in until at least then. There have been 4ths of July where Christine and I had a problem finding accommodation so I am making doubly sure this year.
Ride safe